Scholars, filmmakers, and visual artists from Russia, Europe, and the United States will come together in Pittsburgh, Pennsylvania for two weeks of film screenings, exhibits, a public reenactment, and academic seminars.

Symposium 2000 will be a large-scale scholarly and cultural event consisting of four interrelated parts:

University of Pittsburgh co-sponsors include the Office of the Provost and PITT ARTS, the Deans' Offices of the Faculty of Arts and Sciences and of the College of Arts and Sciences, the University Center for International Studies, the Center for Russian and East European Studies, the Department of Slavic Languages and Literatures, the Department of Theatre Arts, the Film Studies Program, the Graduate Program for Cultural Studies, and the Pitt Blue Blouses. 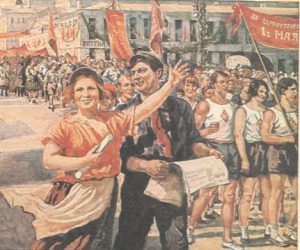 The Russian Film Symposium Nation, Fetish, Identity commences with a historical recreation of a Soviet May Day Parade, circa 1930. The parades served as powerful advertisements, both domestic and international, of Soviet identity. The May First procession for the conference will feature marching workers' and young pioneer brigades, patriotic flags, political caricatures and colorful displays of industrial achievements and cultural campaigns invoking a fascinating period of Russian-Soviet culture. The event will also reproduce the authentic carnival atmosphere accompanying those Soviet holidays with games, amateur workers' theater and political puppet shows. While these early Soviet pageants no longer exist, the potency of the visual imagery of the parades has transcended historical boundaries. In contemporary Russian cinema and culture, the "Moscow Parades" have been transformed and repackaged into objects of parody, fetishism and nostalgia.

This series of Russian films featuring actor Sergei Makovetskii will be screened May 3–21, 2000, by Carnegie Museum of Art in conjunction with the Pittsburgh Russian Film Symposium. Mr. Makovetskii will attend the May 3 – May 6 screenings. Director Vadim Abdrashitov will introduce the May 3 screening of his film.

In the eight years since the end of Soviet power—not to mention the end of state subsidies and protectionism—Russia's film industry has struggled in the face of financial shortages, aggressive American competition, and a lack of a definable set of cultural values and metaphors around which a new popular cinema might be cultivated. In these conditions, Russian filmmakers have produced a number of films in which objects of cultural regard acquire new meanings and uses at various moments in the nation's biography, all from a historical perspective that many have characterized as "beyond" or "after" history itself. Such films both depict and participate in Russian society's attempts to define new objects of collective and personal devotion. As represented in recent Russian film, this process resonates with the concept of fetishism, an exaggerated, compensatory performance of desire necessitated by an unacceptable absence, by the painful awareness of lack: material, ideological, moral. The films in the series share an emphasis on desire as a response to lack, through different historical and cinematic filters.

They also have in common the arresting screen presence of Sergei Makovetskii, one of the leading actors in Russia today.

Play for a Passenger

Introduced by the director

This contemporary fable involves a passenger on a train who takes an inexplicable interest in the conductor. After he goes so far as to follow the conductor home and move into the man's spare room with his wife, the two men's dark, shared past begins to emerge, as well as an intricate plan to take revenge for something that happened on "the other side" of the Soviet collapse. Winner of the Silver Bear at the Berlin Film Festival.

This film will be screened together with the short Trofim (see below).

Tragicomedy based on Maxim Gorky's play Country House Dwellers. The film examines the lives of the upper-class residents of a summer colony.

This short will be screened together with Summer People (see above).

One of four short films released together as Arrival of the Train to mark cinema's 100th anniversary. This one is constructed around a purported outtake from the Lumieres' famous film of a train arriving at a Russian station. Trofim, a Russian peasant just arrived from the village, continually interrupts the French film maker, who has set up his camera on the platform. Balabanov's narrative also depicts Trofim's story before and after his encounter with the new cinematic technology.

Eccentric contemporary drama about a poet, Aleksandr Sergeevich Makarov, whose life changes drastically after he buys a pistol (also a "Makarov"—a well-known type of Russian gun) on a whim from a stranger on the street.

The wife of a KGB officer in 1939 Moscow tries to escape from the life that has become repulsive to her. The many sub-plots include an ill-fated plan to affix a prosthetic penis to a mare for a military parade and a writer whose artistic integrity leads to a clash with the authorities. Visually, the film recalls the lavish "Grand Style" of High Stalinism, in which Communist slogans and icons combine with the trappings of imperial grandeur, material abundance, and high culture.

Pittsburgh Filmmakers will host two screenings of student films during the running of the Pittsburgh Russian Film Symposium. The first will be a retrospective of student prize-winning films from Russia's St. Anna Film Festival. The second will feature student films from the master class workshops of two leading Russian directors—Vladimir Khotinenko and Aleksandr Mitta. These screenings are tentatively scheduled as follows.

All sessions will be held at the Oakland Beehive, located on Forbes Avenue just west of the University of Pittsburgh campus.

Participants in the Symposium