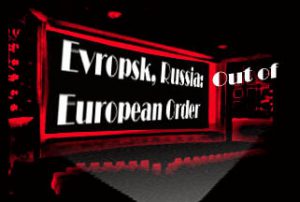 Russia in the twenty-first century occupies a split status vis-à-vis Europe and the US. In cultural terms, Russia unequivocally participates in a European heritage to which it continues to contribute its own distinct national texts. In military, economic, and political terms, however, Russia exists in a different administrative and conceptual space, outside the European order. This contradiction poses challenges for interdisciplinary research, as well as opportunities for productive dialogues with colleagues whose methodological and policy assumptions are firmly embedded in one or the other of these two Russias.

The familiar Cold War binaries (Western vs. Eastern Europes; NATO vs. Warsaw Pact; Common Market vs. Comecon, etc.) have thus been supplanted by a different binary, now internal to the discourse on contemporary Russia in its dual status as European/non-European nation. These debates, as we know from Petr Chaadaev, are not new. The 19th c. paradigm of the Westernizer-Slavophile debate, however, is no more adequate in the context of globalization than the outmoded notion of "symmetrical Europes" in the post-Cold War period.

This discursive schizophrenia around Russia is the focus of the 2001 Russian Film Symposium, "Evropsk, Russia: Out of european Order?" Participants are asked to examine cinematic representations of that nation as redolent of this tension and shifting status. Russia's "split personality," whether a construct of the US-European alliance or internal to the emergent nation itself, has both fascinating and problematic implications for its connections with Europe, as well as for its own sense of mission as a gateway culture for the Caucasus and Central Asia. The (to date) little examined interaction of Russia with these regions may be the beginning of a re-conceptualization of this part of the world, and of Russia's role in defining its position in both global culture and global conflict.

As a focus for this aspect of the discussion, coordinated screenings of four films at Carnegie Museum will be devoted to the theme of Russia and the Caucasus. These will include Vadim Abdrashitov's Time of the Dancer, Sergei Bodrov's Prisoner of the Caucasus, Rustam Ibragimbekov's Family, and Aleksandr Rogozhkin's Checkpoint. Guests of the Symposium will include several film-industry figures, including Rustam Ibragimbekov, best known for his work with Nikita Mikhalkov, and Aleksandr Mindadze, scriptwriter for all Vadim Abdrashitov's films. Scholars and journalists presenting research at the symposium include Ekaterina Degot', Evgenii Dobrenko, Mikhail Iampol'skii, Galina Kabakova, Viktor Matizen, Elena Stishova, Nina Tsyrkun, and Neia Zorkaia.

Evropsk, Russia: A Film Series at
Carnegie Museum of Art

Written and co-directed by Rustam Ibragimbekov (scriptwriter for Burnt by the Sun and The Barber of Siberia), this allegory of the USSR's collapse traces the disintegration of an extended family—several generations, several ethnic backgrounds—in 1990 Baku. Stark realism combines with the exotic; pogroms and violence in the city parallel intrigues within the family. The director will introduce the 2 May screening.

Prisoner of the Mountains.
Directed by Sergei Bodrov.
Russia, 1996. 96 min

Major Russian actors, Oleg Menshikov and Sergei Bodrov. Jr., star as two soldiers who are captured and held hostage by a Chechen villager, whose daughter falls in love with the younger of the two soldiers. Loosely based on Leo Tolstoy's famous story, this contemporary tale is fast-paced and disturbing, raising provocative questions about Russia's role in the Caucasus.

Set "somewhere in the Caucasus," this film by a duo of Russia's major filmmakers gives an unusual twist to the war theme, telling a story of three Russian men-two officers and a folk dancer--who decide to settle down in a recently occupied village. The masterful combination of ironic stylization, human drama, and violence explores Russia's imperial ambitions and complex national identity. The scriptwriter will introduce the 4 May screening.

Due to a tragic mishap, a group of young Russian soldiers is exiled to a remote outpost in the skirmish-ridden Caucasus, where they spend time drinking, doing drugs, and enjoying sexual favors of a local girl. The shockingly simple style of this film, which avoids both the classic Hero and the moralizing message, underscores the absurdity of the "war mission."

Evgenii Iufit was born in 1961 in Saint Petersburg, Russia.

In the early 1980s he began working as a painter and art photographer.

In 1985 he set up the first independent film studio in Russia, MZHALALA FILM, which brought together artists, writers, directors and others sympathetic to radical aesthetic experimentation.

At this studio Iufit made a number of films which have been shown at the world's major film festivals including Montreal, Locarno, Toronto, Rotterdam, and Moscow. His film, Daddy, Frost is Dead, was awarded the Grand Prix at the Rimini Film Festival in Italy. Iufit's paintings and photographs have been shown in major exhibitions of contemporary Russian art since 1985, at the State Russian Museum, St. Petersburg; The Museum of Modern Art, New York; Stedelijk Museum, Amsterdam; Kunstahalle, Dusseldorf; Kunstverein, Hanover, and The Museum of Modern Art, Mexico City. Works by Iufit are to be found in museums, galleries, and private collections both in Russia and abroad.

Notes on the Films

A young sailor descends from a local train. He goes to a nearby forest, which is full of strange men in medical uniforms behaving in an absurd and eccentric manner. The sailor falls under their influence and masochistically gives himself up to them only to be disemboweled by the werewolf orderlies. The sailor's last unconscious image is a "white ship sailing towards the horizon"—a Soviet symbol for happiness and joy.

Werewolf Orderlies is the first of Evgenii Iufit's films in which the necrorealist aesthetics of social grotesque and black humor appear.

An eccentric and absurd comedy with endless nonstop fighting, chasing, murders, and suicides which are intercut with Soviet symbols of peace and freedom—white doves flying away from the hands of "pioneers"—and documentary footage of the pioneers' everyday lives.

Spring demonstrates the precision of Yevgenii Iufit's structural and editing techniques. It was conceived as a manifesto of necrorealism.

The film combines intuition, an interest in the unconscious mind, and shock tactics (traditions of the 1920's avant garde) with social issues of Soviet Russia.

The irrationality of the human psyche, sadomasochism, and suicide are the leitmotivs of this film. The documentary footage of airplanes and pilots—symbols of courage and honor—become an unexpected counterpoint to the main structure of the film. The combination of documentary footage and poetic storytelling with sever northern setting reinforce the ascetic atmosphere of Suicide Monsters and give its self-destructive characters heroic and noble appearance.

This three-minute film is about a day in the lives of a group of pacifists hiding from a war tribunal in the basement of a destroyed house and enduring all the difficulties of war with great courage.

A military group of alpinists are selected to carry out a secret mission. The fate of humanity depends on their success. The rules of the mission require the death of each participant once his or her task is accomplished. After killing one of their colleagues and splitting into several groups, the alpinists continue their journey. But the human unconscious doesn't follow military orders. Having once committed murder, the "knights" can't control their desire to kill. They forgot their mission... and kill each other instead.

An experimental work in the necrorealist style, loosely based on Tolstoy's "The Vampire Family."

The necrorealist science fiction plot involves a team of scientists attempting to cross a human being with a tree, and a special unit dispatched to hunt down the zombie-like mutants created in a previous, failed experiment.

An experimental black-and-white meditation on the complex, ever-changing relationship between a filmmaker and his subject matter.

The narrative, which is devoid of any conventional plot, seems entirely based on the performers' improvisation. But there are enough clues to suggest that the film is meant as a cautionary tale about artists who get too intimately involved with their material. Indeed, the filmmaker gets so close to his recorded event that at the end he loses all detachment and himself becomes an object and a victim. -- Variety Film Reviews

The program is curated by Masha Godovannaia.

Russian Necrorealist Cinema: The Films of Evgenii Iufit has been made possible with the support of Finnair, the Museum of Modern Art, and Anthology Film Archives.

Russia on the Road: Searching for the Self

The success of the scholarly program would not have been possible without the support of the management and staff of the Oakland Beehive. The Beehive has made its space and equipment available to the Russian Film Symposium for two years, for which we are most grateful. 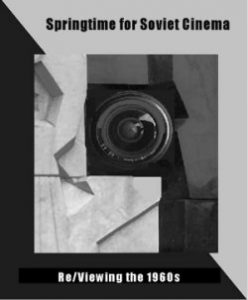 Revolution within the Revolution:
Soviet Films of the Thaw