A recent graduate of MGU, Eva has a new job, friends, and Denis, her doting boyfriend.  She fears, however, the house with the white picket fence: a predictable life with marriage and children void of adventure.  Although Denis is deeply in love with her, she perceives their relationship to be the root of her ennui.  In search of something better, she dumps him and embarks on a string of dating mishaps in Ekaterina Telegina’s Break-Up Habit.

The film, on the surface, is a conventional romantic comedy.  It employs a fatalistic, happily-ever-after ending, as Eva finds her soul mate and true love surmounts all challenges and obstacles.  Telegina’s film, however, brings the established tropes of the genre into question.  Although the heroine does not die, Eva’s happy ending might be viewed as a tragedy, as the viewer is left wondering whether to sympathize with her, cheer for her, or pity her.

Eva’s actions are, in one sense, a series of disavowals.  After breaking up with Denis, she meets her second boyfriend, a rock musician, while letting loose at a night club.  When their love affair takes a turn for the worse, she arranges a meeting with him but never shows up, a decision that ends their relationship.  Her next fling involves the company of a rich businessman, and although he is money smart, he does not understand the concept of fidelity.  She dates two more men: Fabio, the Italian male chauvinist and Ivan, the smart photographer—who also happens to be God in the bedroom—both of whom she leaves on the premise that neither is the one for her.  Her next whirlwind romance ends when her new squeeze announces that he is moving to Australia for a new job.  Eva fails to accept that the lack she feels without a boyfriend also causes her desire, as she ultimately rejects every man that comes into her life—warranted or not—but is oblivious that breaking up has become a habit.

Just as Eva moves from one relationship to another, she eventually decides to approach each of her exes to ask why they broke up.  From the men’s perspectives, however, the breakups are mostly the result of Eva’s impulses and flippant assumptions.  Alone and dejected, she meets up with Denis, who previously promised to wait for her forever.  He tells her that he will wait for one more year, but Eva puts off rekindling their relationship.  When she finds herself alone exactly one year later, she calls Denis only to learn that he is to be married the very next day.

The film, in some ways, makes a caricature of the romantic comedy.  Eva’s relationships are aesthetically punctuated by primitive, kindergarten sketches that flash across the screen signaling, on the one hand, her character’s immaturity and, on the other, the film’s poke at conventional genre tropes and stereotypes.  After Eva shows up at Denis’s wedding, for example, she gives his new bride a white rose and jumps off a bridge into a waterfall.  The cartoonish drawings of rain that engulf the screen are a campy play on the excess of romantic comedy. 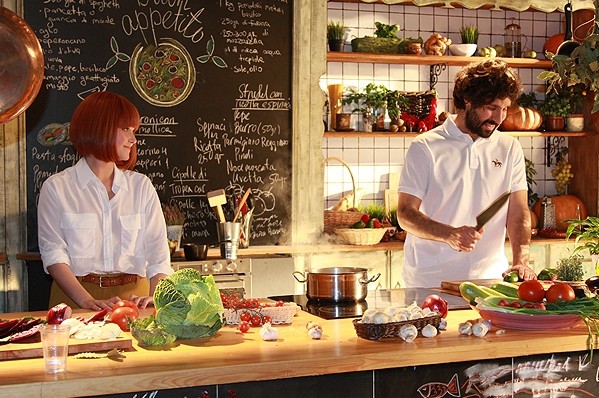 Her character, furthermore, is a collage of stock heroines from variants of romantic comedy: the chick-flick film, the anonymous writer to Dear Abby, the romance novel, and the television sitcom.  The need to document her tragic dating world—to make it public—is clear from the beginning, as the film begins in an airport.  She recalls the events of her dating life, through a series of flashbacks, to a stranger who is crying about a recent breakup.  Throughout the film, Eva consistently infuses her narrative with the romanticism of Jane Austen, as she is even shown narrating passages from Pride and Prejudice on her computer.  The plot also cites the American television show, Sex and the City.  Eva’s friends make their debut at one point to narrate their own testimonials, adding a ridiculous, recognizable element to Eva’s blog posts about her relationship woes, which go viral on the internet.

But for a creator of her own romance novel, for a woman who purports to leave a healthy relationship in order to live her life and reach for the stars, the film actually points to Eva’s weaknesses.  Her destiny is a quiet stranger who rescues her from her waterfall jump, and this is only the case because Eva suddenly decides that her life’s events led her to him.

There is almost no relationship development between Eva and her fated stranger.  Although she ends her only stable relationship, with Denis, in order to seek excitement and freedom, the last the viewer sees of her is in a somewhat sarcastic adventure scenario in Antarctica, as she travels to the ends of the earth to avoid another breakup and the potential fate of star-crossed lovers.  With the film’s end her journey concludes, in fact, with the same threat under which it began.  She must settle.

Although Telegina’s film was not intended to be a parody, it is worth wondering whether the director intended to expose the transparency of romantic comedy without deconstructing its laws.  Just as romantic comedy capitalizes on happy endings and the imagined fate of reunited lovers, the film’s use of such tropes serves to expose the genre’s ideological construction.  Eva’s future appears bright on the surface, but the viewer’s last impression of her is a computer desktop photograph of the happy couple that leaves an uncomfortable voyeuristic insight into the question of how to understand and consume happy endings. 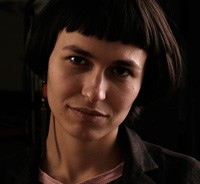 Ekaterina Telegina was born in Omsk.  She received degrees from the Internews Independent School of Cinema and Television and from the State Institute of Filmmaking (VGIK).  She has worked as a photographer, as well as directed music videos, fashion shows, presentation films, and advertisements.  She directed a short film, The Gust of Wind (2009), which received a People’s Choice award and appeared at several film festivals.  Break-Up Habit is her debut feature-length film.