Eternal Homecoming, the most recent film directed by Kira Muratova, holds challenges for the audience that are similar to those of the director’s previous films.  It is not difficult to recognize Muratova’s authorial thumbprint on the film: the appearance of her favorite actors, (including Natal’ia Buz’ko, Renata Litvinova, Anna Demidova and Oleg Tabakov); the mise-en-scène of a genteel, well-furbished apartment filled with her typical props (paintings, mirrors, a piano, house plants); and most importantly, her signature use of “twinned” images, from the level of props to repetitive scenes.  The most important chains of doubles in this film are created by the recurrence of episodes.

The same simple story unravels several times over, played out by several pairs of actors of different ages, personalities, and occupations.  A man visits a woman; he is an old acquaintance from her school years and seeks help to resolve his deadlocked situation.  Different actors may duplicate one another as they play the same role, or sometimes the same actors may play the scenario out again, taking on completely different visual styles.  Veteran actor Oleg Tabakov, for example, first appears in a standard suit, while actress Alla Demidova wears a19th century granny-style dress; the two then reappear wearing strikingly different fashions: now Tabakov is in a cap and hoodie while Demidova sports a short black wig with a cigar.  Duplicated images, and thus blurred identities, emerge in the names of characters as well: the heroine cannot figure out whether her visitor is Oleg or Iurii.  As the heroine points out, the nicknames of his wife, Liuda, and girlfriend, Liusia, come from the same name.  The director’s typical tactics level out differences and resist the uniqueness of the characters. 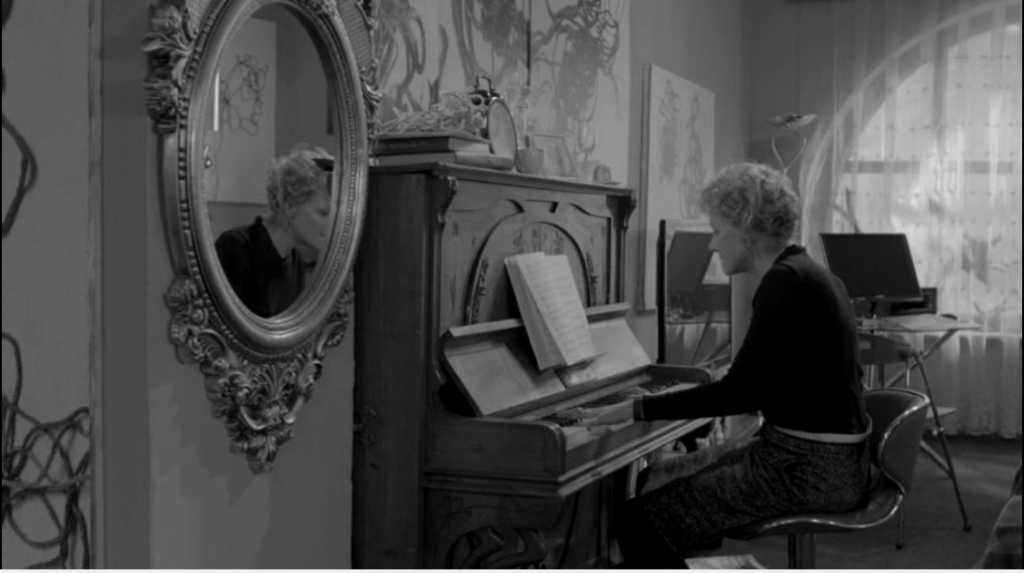 Only when the film has progressed to the middle does the trick become apparent: the scenes turn out to be fragments of casting auditions by a deceased film director.  In order to continue making the film, a young producer is showing the portfolio of scenes to a potential investor, who pretends to understand this “non-commercial, art-house” film.  Muratova has used this film-inside-a-film structure before, in her most well-known film, Asthenic Syndrome (1989), to make a sharp comment on the relationship between directors and audiences in the Perestroika period.  Here, Muratova uses it to make fun of the film production process.  The scene is conveyed by ironical self-reflection, as she cast her real producer Oleg Kohan and her grandson Anton Muratov respectively to play the simpleminded investor and the cunning producer, who successfully grabs the investor’s money by deception.

This device—of a film-inside-a-film—shifts the focus away from the fictional hero and heroine to the actors participating in the casting audition.  The insistent repetitions allow spectators to discover forgotten lines and crude acting, along with changes to the set and two specific, recurrent props.  The heroines bring these props into the scene again and again: the painting “A Ghost in an Armchair” and a tangled knot of rope.  The two objects repeat themselves visually, structurally, and metaphysically as metaphors in several layers of frames.  An armchair (covered with white fabric in the painting) resonates with similar chairs shown in the production screening room where the producer and investor are located; they create a mise-en-abyme between the two camera angles, directed towards the screening room and the casting-test films.  The rope’s knot, which the heroine struggles to untangle, is not only duplicated in one of the on-set paintings, but also implies off-screen backstories: the hero’s tangled love life; a man’s suicide; and the narrative, tangled into itself.

To resolve the situation, a choice must be made.  The hero is constantly put on the spot to choose between two options: whether to drink coffee or tea; whether he came by plane or by train; whether he is Oleg or Iurii; and, finally, whether to choose his wife or his girlfriend.  But he denies or ignores any given question.  Moreover, as the heroine herself notes, his selection would be meaningless; it does not matter who he is and whether he chooses Liuda or Liusia.  Regardless, he is coming back, twice, thrice, even from a suicidal death reported on television.  He continues his eternal return.

Resisting or evading choices lies in the film’s fundamental structure: a chain of repetitive, apparently un-edited fragments that render all the situations meaningless.  The replays exhaust the melodramatic mood otherwise set up by symbolic domestic decorations and nostalgic, sentimental music (this includes Petr Leshchenko’s songs of the 1930s and Zemfira’s performance of the Duke of Mantua’s aria, “La donna e mobile”).  An irresolute man (with his bathetic story of a love triangle, one man’s suicide and another’s return) becomes a light-hearted skit about human failings and dilemmas that repeat forever.

Twice in the film, the endlessly repeating parade of casting-test scenes is broken by a black-and-white screen that offers two contrasting critical moments when the camera follows the two main actresses, first Buz’ko and then Litvinova.  In the middle of the film, the camera tracks back, following Buz’ko from a low-angle; the actress is coming out of the set and yelling at the phone, complaining about the contract.  By contrast, in a separate scene towards the end, the camera closes in on Litvinova, sentimentally reclining on the bed while Petr Leshchenko’s song plays in the background.  While Buz’ko’s scene reveals that the previous scene is a mere celluloid world, Litvinova remains in the melodramatic frame, within the status quo.  As the canny producer points out, without knowing the deceased film director’s intentions—which fragments to include (the prosaic reality or the melodramatic screen world?)—the whole film becomes a kind of “game” to be played with the viewer. 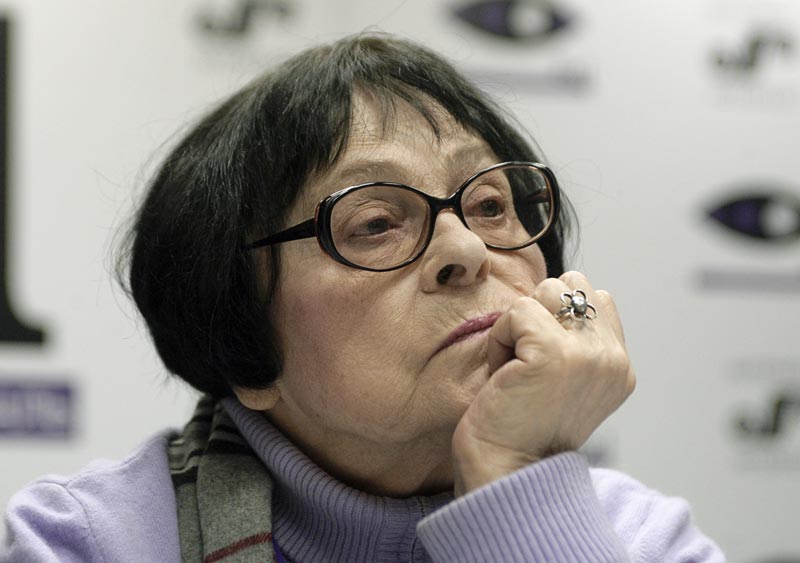 Kira Muratova was born in Soroca (in present-day Moldova) and completed her studies at the State Institute for Filmmaking (VGIK) in Moscow in 1962. After directing two films together with her husband, Aleksandr Muratov, she began her solo directing career in 1967 with Brief Encounters, the first of her many films to be banned and/or severely censored by the authorities during the Soviet era. Since the collapse of the Soviet Union, Muratova has emerged as one of the most important cinematic auteurs of her age. Her late-perestroika film Asthenic Syndrome marked the peak of so-called chernukha filmmaking, and her post-Soviet work continues to challenge both ethical and aesthetic sensibilities.  Despite her long association with Odessa Film Studios, all of her films to date have been in Russian.