How intimate are our lives behind closed doors? Natasha Merkulova and Aleksei Chupov’s Intimate Parts navigates the tendentious relationship between the public and the private spheres of sexuality in contemporary, urbanite Moscow. It is a complicated film that avoids an overt political position but instead oscillates between the celebration and pathologization of sexual encounters, and this is perhaps what imbues the film with its frank, if controversial, honesty. Merkulova and Chupov seem to have recognized that much of contemporary sexual politics requires living within this contradiction of what ones does and what one admits to having done, what one condemns and what one praises, and that all of us find ourselves inexplicably somewhere in this interstitial space.

The Oxford English Dictionary defines “intimate” as “essential,” “intrinsic,” and yet “of a relation between things,” “a union.” One could say, for example, that an intimate moment is shared with someone and therefore communal, or an intimate detail could just as easily be kept from others and remain hidden. Sex, similarly, moves from the guarded secret to the shared experience: our sexual organs, our “intimate parts,” are kept clothed, shameful, and tucked away, only to become truly intimate once we have shared a profound knowledge and experience of them with others. Intimate Parts announces its intention to reveal and share these nether regions in one of its opening shots, where photographer Ivan (Kolokol’nikov) asks his interlocutors for the plural of “cunt” [“pizda,” so either “pizdy” or “pëzdy”]. Ivan’s art lies in taking photos of men and women’s genitals, enlarging them, and hanging them throughout a studio space. While he photographs them, the models frequently confess their love lives and air their dirty laundry, yet it is worth noting that these photos, while highly sexual, are shot in extreme close-up and are both incredibly intimate and entirely defamiliarized.

Intimate Parts also recognizes, however, the inverse: do our persistent investigations into the minutiae of sex destroy any chance of authentic intimacy? Attempts to manage and mediate sexual “deviancy” in the film rupture any chance of true reconciliation in the lives of the film’s characters. Despite the psychoanalytic encouragement of psychologist Boris (Badalbeili), those who delve into the ocean of their own perversions find that the waters run deep. Aleksei (Tarasov) will follow through in his extra-martial pursuit of homely Al’bina (Kholoniakova) only to push the limits of a familial crisis. Eva (Shcheglova) and Sergei (Chupov) pursue a lop-sided ménage-à-trois with a circus performer, but this still won’t fill the void Eva feels over her missing maternity, secretly keeping a book of sonograms with names of babies that could have been.

Perhaps the most intriguing point of Intimate Parts is this phantom pregnancy that haunts the film and reminds the viewer of the film’s timely presence on Russian screens. Despite their insistence in interviews that the film is not a commentary on contemporary politics, and that Liudmila is not some ersatz Elena Mizulina, the infamous figure behind much of anti-LGBT legislation, there can be little doubt that the film resonates with contemporary Russian sexual politics. As Eva and Sergei eat, a television anchorman reminds them of what is at stake in their sex lives: decreased birth rates, increased abortions, and more childless families are dramatically decreasing population figures. This, he threatens, will lead to the destruction of the Russia nation.

Can we understand this tension between conservative mores and free love in Russia other than through this specific historical moment? Any discussion of sexual liberation must negotiate its terms in light of the country’s notorious demographic crisis and traditionalist turn, so that imagining sex outside of any sort of reproductive economy transforms our most intimate moments into political protest. Much like the photos of genitalia on display for close contemplation, sex and sexuality have become the battleground for the Russian political stage, and a heavy question hangs—in the words of the anchorman, who will live in tomorrow’s Russia? 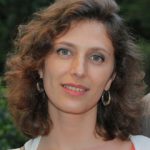 Natasha Merkulova began her career as a journalist in the Irkutsk region. She made the transition to cinema as a screenwriter for the documentary film The Cage, a collaborative effort with director Andrei Kaminskii that earned her the Artëm Borovik prize for investigative journalism. Although Merkulova has since worked primarily as a screenwriter, she had her directorial debut with the documentary film Traumatism in 2010. She also shot the first Russian-language 3D music clip, “Pomogi-mne” by the group Gorod 312. Intimate Parts is her first feature-length film.

Aleksei Chupov, like his wife Natasha Merkulova, began his career in cinema as a screenwriter, after having left his job in advertising. He has written primarily for television series, often on the same projects with Natasha, and Intimate Parts represents his début as both a film screenwriter and a director.
Filmography: 2013 Intimate Parts