Five years after the February and October Revolutions of 1917, no-longer-count Aleksei Tolstoi, then living in Berlin, from which he was soon to return to Soviet Russia, shared an observation with another writer, who almost 60 years later published it in his memoirs: “…something happened to the [Russian] language.  Contrary to the nature of the Russian language, its syntax has been breaking…  [T]he adjective now stands after the noun, and the verb at the very end of the sentence.”  Not everyone was as scared by the changes in linguistic practices as Count Tolstoi at the time.  Some writers treated the same process as a productive one.  An example would be Mikhail Zoshchenko, whose mastery of new phrases and words caught verbatim and fused with caustic humor first made him supremely popular because of his faithful reproduction of the reality of the New Economic Policy, and then led to accusations that he blackened that same reality—perceived as part of an uninterrupted movement towards socialism.  Even linguistic matters became political. 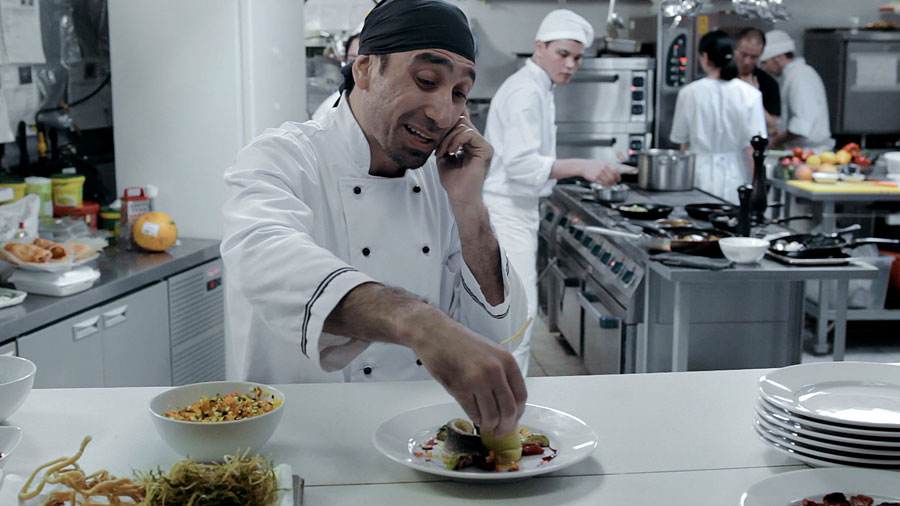 These old examples serve, first of all, to show the underlying reasons for the attraction that verbatim holds in times of linguistic shifts, which are simply the outer ridge of more significant cultural, economic, social, and political changes.  It acknowledges the rift between literary language and even journalese—and the “language of the street”; the difficulty of reproducing it by employing the regular degree of everyday observation.  This rift also creates a sense of mystery that accompanies the growing difficulty of communication, which, in turn, leads to alienation or nekommunikabel’nost’.  Verbatim in literature, theater, and cinema helps to recognize the familiar, but it also helps to familiarize the strange, thus penetrating the wall between users of the old and the new languages. 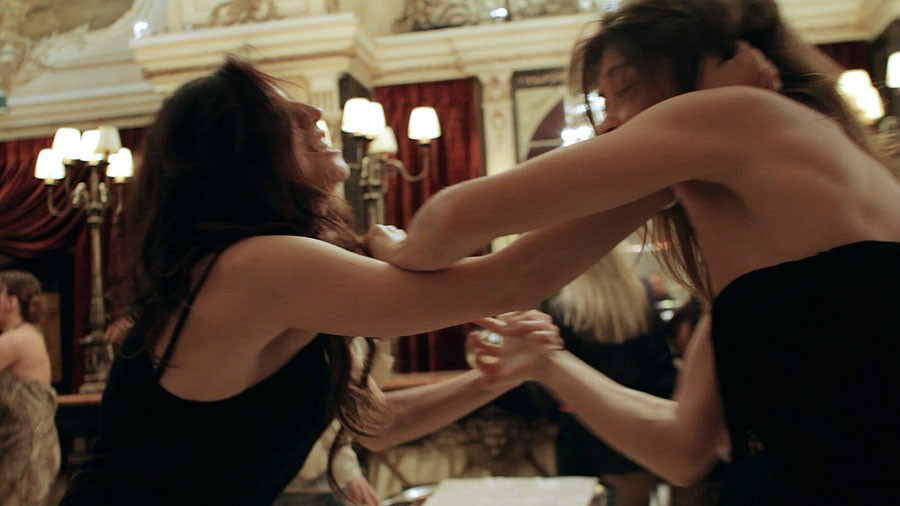 Reviewers of Till Night Do Us Part habitually stress these points: that the film is based on a highly popular newspaper article consisting of overheard conversations in a posh Moscow restaurant; that the film’s characters don’t listen to each other most of the time.  In addition to the marked distance between the restaurant’s clients and its workers, there is the particular added attraction of seeing a number of high-profile Moscow celebrities in tiny parts, including not only popular actors, but the former editor of Russian Vogue, Alena Doletskaia, and the enfant terrible of Russian pop music Sergei Shnurov as well.  As a result, viewing becomes a kind of voyeuristic exercise.  Or, rather, voyeurism is supposed to complement the “auditory voyeurism” retained from the original article.  Khlebnikov’s film is not verbose, but it is wordy nonetheless, since in the absence of a conventional plot viewers are left to construct mini-subplots based on the lines of dialogue and one or two visual cues—the clothes, the make-up, the general physical appearance: hipsters are, after all, instantly identifiable and clearly distinguishable from half-gangsters, half-businessmen.

The mystery behind verbal and nonverbal appearances, however, still remains—and that is what the filmmakers count on for keeping the viewer’s interest.  It’s the recognition despite the difference; a game where you have to reconstruct the full story often from one-sided conversations or to provide a backstory to fit actual dialogues, modifying it in accordance with each new line; or to go beyond a foreign language and recognize a universal love story.  It is detective work of sorts, aimed at, if not revealing, then in reveling in the ultimate mystery of the other.

The film’s narrative also depends on the particular performative nature of middle class Russian culture of recent years.  The best, and ultimately self-reflexive symbol of this in Khlebnikov’s film is one of its final shots, which shows the restaurant’s workers recording an unseemly fight amongst their nose-up-in-the-air clients with their cellphones, thus actualizing (and finally visualizing) the possibility that has been present implicitly all the time: is all this just for show.  Moreover, the ultimate viewers of this show are those who are supposed to be invisible, suppressed into the subconscious of the restaurant kitchen—and they will be the ones having the last laugh.

The creative activity required on the part of the audience, who have to provide connections between lines and scenes, and to build up the unified world of the film, predictably spreads outside the confines of the credits.  This has led to accusations (or compliments) levelled at Khlebnikov for presenting a satire on the Moscow nouveau riches (the film, it has been reported, experienced funding problems because of this); while the director has denied the accusations and declined the compliments.  It is not class tensions that erupt at the end of the film; it is the alienation, the nekommunikabel’nost’, so beloved by European filmmakers of the 1960s and their Soviet counterparts, who clearly continue to provide inspiration for Khlebnikov’s style and problematics.

He is not political, Khlebnikov says in interviews; he finds the same “media faces” on the Moscow “barricades” ridiculous—as ridiculous as they appear in his film.  To this it is perhaps instructive to add a quote from Foucault’s Pendulum by Umberto Eco, which seems at first an unlikely companion piece to Khlebnikov’s professed bagatelle.  The director’s apolitical stance, however, is reminiscent of Eco’s hero, another too clever and too disillusioned child of 1968, who ends up inventing a universal plot, in which others are too ready to believe.  With its backdrops of mysterious villas, museums, and churches it’s easy to forget that the story of Foucault’s Pendulum begins in a bar—not the kind of establishment that the film’s characters would visit, but the kind where Khlebnikov himself, as well as his collaborators and the authors of the original article, could be regulars; one of those bars, or cafés, or clubs that cohabit their spaces with intellectual bookstores: “Amparo didn’t like the place anyway.  In her moral and political severity—equaled only by her grace, her magnificent pride—she considered Pilade’s a clubhouse for liberal dandies, and liberal dandysme, as far as she was concerned, was a subtle thread in the fabric of the capitalist plot.”

Boris Khlebnikov was born in Moscow and graduated from the Film Theory Department of the Russian State Institute of Filmmaking (VGIK) in 1997, after which he pursued a career in scriptwriting and directing.  His full-length feature debut, Roads to Koktebel, co-directed with Aleksei Popogrebskii, received multiple prizes at home and abroad, and opened the way for a new “wave” in Russian cinema, later termed “novye tikhie” (“the new quiet ones”).  He continued his solo career, winning the Best Director award at Kinotavr, the national film festival, in 2006 for Free Floating.