In the opening scene of Aleksei Mizgirev’s The Convoy,captain Ignat savagely beats up a group of young men in response to their provocation. In the next eighty minutes of the film, violence continues to dominate the screen as Ignat, following his commander’s orders, sets off to search for and bring back two army deserters and the government money that they stole. Once Ignat and the sergeant accompanying him find one of the fugitives, the latter commits suicide to avoid a court martial. They soon find the second deserter, Artem Tugaev, whom they have to bring to headquarters via Moscow. What unravels is an unflattering exposure of Russia’s darkest corners, where the police are as lawless and brutal as the criminal world, and money is the only religion.

Mizgirev paints a truly grim picture; the film is shot predominantly in grayish and dark colors with a blinding bright light occasionally piercing and transforming the setting into a hospital ward. What appears as an examination room in the light is essentially a gigantic prison, as almost every shot features a set of bars or wired fences. At the heart of this “darkness” lies Moscow, which exposes the least glamorous of its sights: train stations, dirty bathrooms, and suburban apartments. The outnumbered forces of the good stand little chance against the hordes of the evil in this corrupt and merciless metropolis. 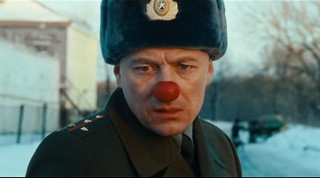 Ignat, not formally allied with either of the sides, lives by his own rules and fights injustice with his own violent methods. A pitiless tough guy on the surface, the captain has been severely traumatized by the death of his daughter Tania, for which he feels responsible. He refuses to take medicine for his migraine attacks since they cause brief hallucinations of his daughter and his attempts to “revive” her. Ignat’s fixation on the traumatic experience gives an additional meaning to the bars and fences that crowd almost frame and represent the captain’s emotional self-imprisonment. His obsession with feelings of guilt also manifests itself in his recurring mode of behavior, which goes through the same cycle time and again: a feat of rage is followed by an act of violence, a hallucination, and then a blackout. Irrespective of what happens in-between, these elements of the cycle remain unchanged, as do Ignat’s repetitive phrases that soon begin to sound like a broken record: “I’m not going to apologize,” “It doesn’t hurt,” and “You don’t get it.”

Verbal repetition becomes a defense mechanism that the characters employ when faced with traumatic experiences. While Ignat refuses to apologize, and his ex-wife insists that he is not guilty, Tugaev, the surviving deserter, keeps telling the same jokes, merely substituting new characters. The jokes are both ill-timed and not funny; Artem’s ambition, however, is not to make people laugh but rather to stop them from fighting. A lone voice of compassion and humanity in this tale of darkness, Tugaev eagerly assumes the role of a clown every time tensions escalate, and, although he almost never manages to cause a roar of laughter, he nonetheless succeeds in, at least temporarily, diverting people’s attention from their object of aggression. His tragic buffoonery thus twice saves an illegal immigrant Tamara: first, from being raped by a police officer and, second, from being deformed by her sexually abusive employer, Issa, who wants to carve a Joker’s smile on her face to prevent her from sleeping with other people. In the end, however, Artem’s well-meaning interventions only make things worse. Tamara is as doomed as the deserter himself. Raped and humiliated, Artem finds himself in a disciplinary battalion, in comparison to which death would seem like a blessing. Yet Mizgirev’s far-from-happy ending has moderately optimistic undertones. The encounter with the tragic buffoon transforms Ignat who, towards the end of the film, also begins to tell terrible jokes and puts on Artem’s red clown nose.

The Convoy, a film for men and about men, thus proves to be ultimately sentimental. An example of hyper-masculinity, Ignat, who does not feel physical pain and can take a scalding hot sturgeon out of boiling soup, is being tormented by psychological suffering that proves to be unbearable even for a tough and seemingly emotionless guy like him. It is the more feminine Artem, with his peaceful disposition and a compassionate heart, who displays true grit by taking even the hardest blows upon himself. The deserter’s “toughness” stems from his mother, who taught him to smile when being beaten and whom he disobeyed only once—when he made the dubious decision to enlist in the army. Ironically, Artem was lured by the prospect of becoming a “tough guy.” 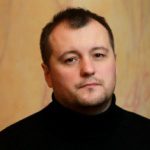 Aleksei Mizgirev was born in Myski, Kemerovo region. In 1998 he graduated from Tomsk State University with a degree in philosophy, and in 2004 he received a degree from the State Institute of Filmmaking (VGIK). During his time at VGIK, he worked in the workshop of Vadim Abdrashitov and served as Assistant Director to Abdrashitov’s film Magnetic Storms. Mizgirev’s first two feature-length films, Hard-Hearted and Buben, Baraban were released in 2007 and 2009, respectively. The Convoy is Mizgirev’s third feature-length film.