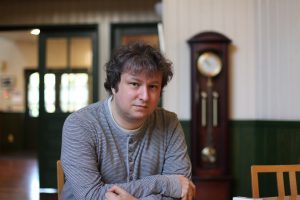 Anton Dolin is a Russian journalist, film critic and scholar. He graduated from the Russian division of the Department of Philology at the University of Moscow in 1997 and completed his graduate studies at the Institute for World Literature (Russian Academy of Sciences) in 2000. He started his journalistic career at radio station Ekho Moscow, where he worked as a correspondent and commentator from 1997 to 2002. Between 2001 and 2005 he worked at Gazeta as a film critic and subsequently became the editor of the culture section. In 2006 he became deputy editor-in-chief if the newspaper Vecherniaia Moskva.   He has also worked for the newspapers Moskovskie novosti and Vedomosti, with the journals Iskusstvo kino and Ekspert, as well as with the websites Russkii zhurnal and Grani.ru. He currently works as a radio broadcaster for Russkaia sluzhba novostei and Maik, has his own weekly rubric on the popular late-night television show Vechernii Urgant, and writes film criticism for the journals Afisha and the site Afisha—Vozdukh. He has repeatedly received awards from the Guild of Film Scholars and Critics, as well as being a recipient a Triumf youth prize. Among his books are Lars von Trier: kontrol’nye rabolty, analiz, interv’iu (2004), Takesi Kitano: Detskie gody (2006), Ulovka XXI (2010), and German: Interv’iu, esse, stsenarii (2011).