Aleksandr Rogozhkin’s Cuckoo opens in Northern Finland in September 1944 as a Finnish soldier, Veikko, is forcibly chained to a rock to serve as a sniper, punishment by his fellow men for being a pacifist. While Veikko spends several days trying to free himself from the shackles, a Red Army captain accused of anti-Soviet activities is driven through the same area of Lapland by his captors. The prisoner, Ivan, is the only survivor of an accidental airplane bombing on their vehicle, an incident that Veikko witnesses through the scope of his rifle.

Anni, a lonely Sami woman whose husband has been away at war for four years, discovers Ivan’s unconscious body and manages to bring him to her home to nurse him back to health. When Veikko finally frees himself, he too goes to the home of Anni and from there the film tracks their endeavors to forge a relationship with each other even though they speak three different languages: Finnish, Russian, and Sami. As the energetic Veikko tries to establish introductions and names, Ivan tells Veikko, “Poshel ty,” meaning “fuck off.” Veikko, however, understands Ivan’s name to be “Pshelty,” which provides a moment of comic relief at the expense of their frustration to understand one another. 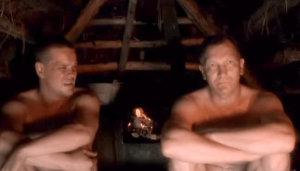 Rogozhkin establishes other comic moments in his war drama by creating a buddy film. The dynamic between Ivan and Veikko codes the men as cultural adversaries if not opposites: for young Veikko the war is already over; for the middle-aged Ivan, unfortunately, the war has already killed him psychologically. In addition to their different languages and political affiliations, the fact that Veikko is dressed in a Waffen SS uniform only contributes to the mistrust Ivan has for his rival whom he simply calls “Fritz” and “Fascist.” The conflict between them is furthered by the fact that Anni, desperate for male attention, seduces the young Finn. Ivan’s jealousy, compounded by his misunderstanding that the war has actually ended, leads him to severely wound Veikko. Anni now must prevent him from dying, and she does so according to Sami pagan traditions. As Veikko enters the land of the dead, Anni coaxes his spirit back to his body.

According to an interview with Rogozhkin the script for the film originally had a subtitle: “Cuckoo, Having Raised its Nestling.” The cuckoo’s cries, according to Russian folkloric belief, indicate how many years a person has left to live, but the cuckoo does not serve a prophetic purpose in the film. Given that the cuckoo is known to lay eggs in the nests of other birds, it provides a clever framework for Rogozhkin’s storylines. On the most basic level, it refers to Veikko and Anni—he is a “cuckoo sniper,” the name given to soldiers who took shots from trees or other disguised vantage points, and Anni’s real name, as the audience eventually learns, is actually “Cuckoo.” On a second level the cuckoo belongs to the melodramatic narrative, as Anni eventually bears children by both Veikko and Ivan. On a third level it is a metaphor for the war, as the cuckoo directly—and indirectly—imposes on the circadian rhythm of the entire mise-en-scène: the land, nature, human relationships, and reproduction.

Although the cuckoo metaphor guides the plot, the landscape is actually the star of the film. The striking scenes of autumn in Kandalaksha clash with what Rogozhkin himself calls the unnatural aspect of the war in his work. Cuckoo was shot on the Kola Peninsula in Northern Russia in a very short amount of time due to the fact that the director needed the film to coincide with seasonal change. The final scene features a panorama of the archipelago, clearly intended to capture the impressive quality of the natural setting. The fragmented land, at the same time, speaks to the ways that war divides territories, memories, and families. 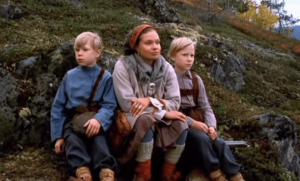 Anni’s voiceover monologue highlights the paradox of the tranquil scene: as she narrates the story of Ivan and Veikko to her two sons—Pshelty and Veikko—it is clear that the children will never meet their fathers, nor will Ivan and Veikko ever know their sons. Although the war is over, it will continue to haunt current and future generational relationships.

Rogozhkin directed other war dramas in the 1990s, as well as a series of popular comedies—The Peculiarities of the National Hunt, The Peculiarities of National Fishing, for example—that deal with issues of national character and cultural differences. Cuckoo illustrates the clash between languages, political beliefs, and nationally constructed cultures, but none of these concepts protect or develop its characters. A significant portion of the film, however, focuses on Anni’s paganism. The laws of Mother Nature and Anni’s humanistic values are ultimately all that save Ivan and Veikko.

Although Rogozhkin is lauded for making “national films,” whether or not Cuckoo is a national film is irrelevant. More important is what his work reveals about national—or imperial—persuasions in our own contemporary moment. Shot on the gulf of the White Sea, Cuckoo employs World War II fiction to create a dialogue about human nature during wartime, while the outcome of the current war on the Black Sea is yet to be determined. Beyond the boundaries of the film it is worth observing that Anni-Kristina Iuuso’s other major role is in Nils Gaup’s film The Kautokeino Rebellion (Norway 2008), which presses the national and imperial paradigm through the 1852 clashes between Norwegian and Sami peoples. Iuuso, moreover, affirms that shooting Cuckoo changed her previous negative impressions about Russia (“I can quite sincerely say that I love Russia and the Russian people.”), and Vladimir Putin even presented her with a State Award for the film. Cuckoo, from these perspectives, provides an interesting angle to our current sociopolitical and historical circumstances. 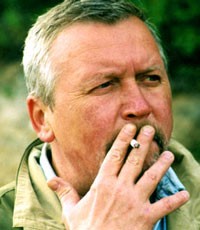 Aleksandr Rogozhkin was born in Leningrad and graduated from Leningrad State University in 1972. He studied under Sergei Gerasimov at the State Institute for Cinematography (VGIK) in Moscow and graduated in 1982. He has made a series of award-winning films, and his works are regularly screened on the domestic and international film festival circuit.