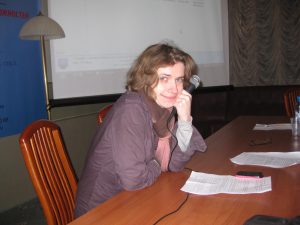 Svetlana Ishevskaia is a film scholar. She graduated from the Department of Scriptwriting and Film Studies of the Russian State University of Cinematography (VGIK) in 2005. From 2000 until 2013 she worked on the editorial board of the journal Kinovedcheskie zapiski. In 2008, together with Dar’ia Kruzhkova edited and provided commentary for a collection of texts by Dziga Vertov (Dziga Vertov: Iz naslediia. Vol. 2: Stat’i i vystupleniia). Since 2009 she is a Senior Researcher of the Research Institute for Cinema Studies within the Russian State University of Cinematography (VGIK). She regularly publishes in the annual Khroniki kinoprotsessa, which is devoted to contemporary Russian cinema. She is a post-graduate student in Film Studies at VGIK.