Within the first minutes of his drama Chukhrai transfers the viewer into the harsh post-war reality of the Soviet Union seen through the eyes of a six-year-old boy, Sania (Misha Filipchuk). Set in 1952, the film illustrates a detailed account of the times: the scarcities in everyday life, the stuffy nature of communal apartments, and Stalin’s invariable presence in the background as a beacon of hope providing direction but without a clear destination. The influence of every decision and the importance of chance in the course of life is consistently emphasized throughout the film. Happiness and despair, trustfulness and deceit, charm and brutality are all subtly juxtaposed by the director to create a touching melodrama.

The problem of orphans in the post-war period is one of the central themes in the film. Sania will never forget the train trip when his mother, Katia (Ekaterina Rednikova) first met Tolian (Vladimir Mashkov), an alleged Red Army officer—the man who irrevocably changes their lives and determines the boy’s future. Sania’s initial serious psychological trauma stems from the fact that he has never seen his father, who died in 1946 after being seriously wounded during the war. The boy, however, often sees an elusive image of a soldier, the shadow of his father, which gives him hope and support. Sania naturally looks for a substitute for his father in reality and eventually finds it in Tolian. 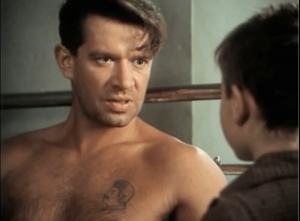 Meanwhile, the film pictures a variety of women—independent, persevering, hard-working, but who infinitely need the attention of men. As Katia meets Tolian, she becomes trapped by his charm and pseudo-military virtue. Due to the lack of men in the post-war period, and her complete loneliness and despair, she immediately sees a life partner in him and falls in love with his virility.

Chukhrai, in fact, treats his characters with special care and attention, and each of them eventually becomes a site of indisputable controversy. Katia is an attractive young mother whose simple beauty and sincerity are later contaminated by the hopelessness of the deadlock in which she finds herself: an indifference to life and devastation leads to her elimination from the plot—there is no place for her in such a cruel world. At the same time, Sania in his young age is already struggling with the adult world—very soon his childish world of naiveté is adulterated and plundered, leading him to an abyss of eternal searching for truth saturated in cruelty and death. Tolian turns out to be simultaneously attractive and repulsive, loving and cruel, parentally benevolent and brutal. He sweeps into the lives of Katia and Sania, destroys them, and disappears, leaving an indelible scar on Sania’s soul. 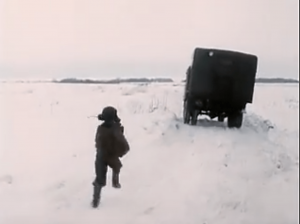 Tolian’s charms evaporate as we learn about his professional activity as a thief. A melodramatic empathy to the fraud, however, haunts the viewer until the end of the film. As Katia and Tolian begin to live together, Sania often feels abandoned and is left without attention, which is why he first does not accept Tolian as his new father. After Tolian punishes his offenders—local bullies—and teaches him to hit back, Sania’s attitude towards him changes, and subconsciously the boy chooses Tolian as an object of identification. With the ingenuity of a child he believes every word of the criminal and registers his advice in his memory. Meanwhile, the fear in which Tolian keeps the boy both attracts the child and leaves an unbridgeable distance between them. When Tolian shows the boy a tattoo of Stalin on his chest and says he is his father, the problem of the fatherlessness of the current generation becomes apparent.

When Katia suddenly finds out about Tolian’s trade he convinces her to run away with him. The life on the train that ensues leads her to complete frustration; and yet, she cannot leave the burglar. Her hysterical laughter that turns into tears as they sit in a restaurant on the train reveals all the bitterness of her situation and punctuates her personal breakdown. When she finally finds the courage to leave him, Tolian is caught by the police. The coldness of winter emphasizes the severity of reality, as Katia and Sania are waiting by the prison gates to see Tolian once again before a long separation. As the van with the prisoners departs into snowy eternity, Sania dashes to the vehicle and runs behind it with the sincere despair of a son separated from his father. From that day the shadow of the soldier—his real father—never comes to him again.

The continuing story becomes even more heartbreaking and appeals to the deepest sentiments of the viewer—the same endless snow, the boy sitting by the entrance of a hospital, and later by a hill of freshly dug earth at the cemetery. Katia dies as a result of an unsuccessful abortion, and Sania is taken to an orphanage. We later meet him as a teenager—skinny and wearing shabby clothes, collecting scrap metal with his friends. He has been keeping Tolian’s gun through the years in hopes of meeting him again one day, as he was the only person the boy had left in the whole world. The day finally comes. As Sania is walking with his peers through an impoverished, dilapidated district he is suddenly struck by a familiar song—when he comes closer he recognizes Tolian in a degraded drunkard. With mixed feelings of happiness and disgust, the boy introduces himself, but the criminal pretends not to remember either him or his mother and keeps making fun of the boy. At this peak moment of humiliation and with the frustration of all his hopes, Sania makes a serious decision—to kill Tolian. With a shaking hand and unconfident in his actions, Sania finally fires a shot. Whether it was Tolian or somebody else is left as an open question. However, this first shot defines Sania’s future military career and lays the beginning of his firmness in facing death and killing people. The homeless man that Sania later mistakenly takes for Tolian ultimately represents an archetypal image of the thief deeply rooted in Russian society—one that can be encountered anywhere. Meanwhile, the fact that Sania becomes a military man testifies to the fact that he identifies himself with the role Tolian was playing for the public; for Sania, however, it becomes not only an act, but the fulfillment of the role in its full brutality.

In an interview, Chukhrai once mentioned: “I wanted to understand and tell about the people who rule our country today . . . who these people are, what childhood they came from, what shaped them, why they make such mistakes, why they behave in such a way, what their weaknesses and strengths are.” He must have wanted to tell about his own childhood as well because this was his generation. 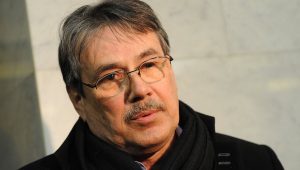 Pavel Chukhrai, son of film director Grigorii Chukhrai, was born in the Moscow region in 1946. He graduated from the State Institute for Filmmaking (VGIK) in 1971—from the cinematography department, and in 1974—from the department of film direction. He began his career as a cameraman’s assistant, director of photography, and then became a feature film director. He is also the author of a number of scripts. His films have been widely acclaimed both in Russia and abroad. In 2003 he was named “Man of the Year” in the category of “Cinema.”