Fragment of an Empire
[Обломок империи]

Fridrikh Ermler’s last silent feature, Fragment of an Empire, tells a very simple story. Its protagonist, a Russian non-commissioned officer, Filimonov (Fedor Nikitin), shell-shocked during the First World War, regains his memory in 1928. Determined to find his wife and get his job back, he goes home to Saint Petersburg only to find out that his wife has remarried, his former employer has been replaced by a factory committee, and that the Saint Petersburg that he used to know does not exist anymore. Renamed Leningrad and deprived of its status as capital, the city with its monumental buildings and statues of Lenin is foreign to Filimonov as is everything else in this new world created by the 1917 Revolution. As time goes by, however, he learns to appreciate the new ways and, although he is not reunited with his wife, he regains full control of his life. At the end of the film, Filimonov breaks the fourth wall and addresses the audience directly as he declares, in true Soviet fashion: “There is still much work to be done!”

As chance would have it, Ermler’s film about the end of an era marked the end of an era for Ermler himself. After finishing work on Fragment of an Empire, the director announced his retirement from cinema, enrolled as a student at the Communist Academy, and returned to filmmaking only in 1932 with Counterplan, one of the first Soviet “talkies” and one of the foundational films of socialist realism. Fragment of an Empire thus proved to be Ermler’s last silent film, his last collaboration with the actor Fedor Nikitin (who had starred in four of his silent features), and his last film until the beginning of World War II that dealt with the revolution and the civil war rather than every-day Soviet life.

The transitional status of the film is reflected in its narrative and aesthetic choices, which oscillate between formalist and socialist realist tendencies. The use of memory loss and recovery as a plot device reconciles the two as it simultaneously creates a formalist defamiliarizing effect and serves as a basis for the classic coming-to-consciousness narrative of socialist realism. Prior to Filimonov’s realization of the true scale of the revolution, he is continuously compared to a helpless and clueless child. Everything around him appears new and intimidating. A statue of Lenin towers over him just as an adult towers over a five year-old; revolving doors and loudspeakers terrify him; his remarks are out of place and are received with a roar of laughter that in turn cause childlike outbursts of rage on his part. As he matures politically, however, he learns to control his emotions—when his wife refuses to leave the material comforts of life with her new, abusive and opportunistic husband, Filimonov remains composed and takes his leave after referring to the couple as “pathetic fragments of an empire.” 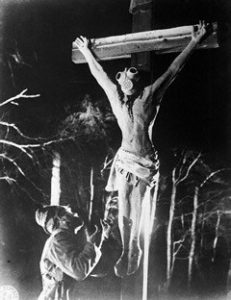 The theme of fragmentation runs throughout the film. Fragment of an Empire starts with scenes from the Civil War. The shell-shocked Filimonov does not fight for either side but he witnesses the effects of the war. As he is walking across a field covered with dead and dying soldiers, the woman who has given him shelter is collecting the boots of the deceased men. The camera captures the bodies in fragmentary fashion: feet, legs, close-ups on the faces of the suffering men. The Civil War comes to an end, the film skips ahead to 1928 (the film’s narrative is itself fragmented) when Filimonov begins to recover his memory. His recollections are incomplete and disconnected, triggered by a visual resemblance with the objects surrounding him. The painful process of recollection is captured in a beautiful montage sequence that is considered by many to be among the most memorable in the film and in Soviet avant-garde cinema in general.

Be it fragmented bodies, memories, or lives, it is the war that produces the fragmentation. It is the First World War that separates Filimonov’s life into a “before” and “after.” In one of the most poignant sequences of the film, the protagonist’s memory brings him back to the war. He is approaching an enemy soldier and as he comes close enough to see his face, he recognizes himself in the enemy. Every single soldier in the sequence, except for the officer giving orders, is played by Nikitin. The sequence, albeit brief, conveys the film’s most powerful message—the futility of violence. In this light, it is remarkable that Ermler chose to open the film with scenes of the Civil War. The enemies in this case have distinct faces of their own but it is impossible not to draw a parallel between the flashback sequence and the Civil War scenes. Extreme low-key lighting separates them visually from the well-lit scenes capturing Soviet life after the war.

Although it is the First World War that leaves Filimonov shell-shocked and amnesiac, it is the Revolution and the Civil War that make the protagonist a “pathetic fragment of an empire.” In this light, the message of Ermler’s film appears significantly more critical of the new Soviet regime than it may seem at first. The viewer is encouraged to empathize not only with Filimonov but with his former employer and his wife. Unlike the numerous faceless factory workers, they do not laugh at the dazed and confused Filimonov but offer him the little money that they have left. In fact, it is only the characters associated with the past that have names and distinct personalities of their own—Filimonov, his wife Natal’ia, her new albeit abusive and hypocritical husband, the Red Army soldier whom Filimonov rescued from death during the Civil War. As the protagonist adjusts to the new environment, he gradually loses his personality. The man with an unkempt beard and lively eyes eventually merges with the crowd—his beard has been trimmed, his emotions brought under control. Filimonov no longer needs the viewer’s compassion but he does not evoke any other feelings either. In Ermler’s rendition, the new empire, built amidst the ruins of the old one, may be empty inside. 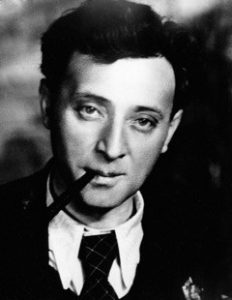 Fridrikh Ermler (born Vladimir Breslav) was born in the Latvian city of Rēzekne in 1898. He adopted the pseudonym “Fridrikh Ermler” while working as a spy for the Bolsheviks during World War I. After the Civil War, Ermler studied at the Leningrad Institute of Screen Arts. He directed his first film, a short, Scarlet Fever, in 1924 and then earned critical acclaim for his 1927 feature The Parisian Cobbler. Over the course of his career, Ermler was awarded four Stalin Prizes. Among his major films are Peasants (1934), She Defends the Motherland (1943), and The Turning Point (1945). Ermler died in 1967 in Leningrad.