First on the Moon is a documentary fiction film that offers the unknown story of the first Soviet trip to the moon. Stylized as a journalistic investigation, the film unravels the 1930s secret space program conceived as a part of the grand Soviet experiment. The film recreates the atmosphere of the bygone Soviet years in the course of tracking down personal stories of the space program participants: the chief engineer of the project Fedor Suprun (Andrei Osipov) and four candidates for the flight: a captain Ivan Kharlamov (Boris Vlasov), a star athlete Nadezhda Svetlaia (Viktoriia Il’inskaia), a circus dwarf Mikhail Roshchev (Viktor Kotov), and the only survivor Khanif Fattakhov (Aleksei Slavnin, Anatolii Otradnov). The atmosphere of the times is restored as meticulously and fancifully as possible through the seamless editing of the documentary and pseudo-documentary footage from the past and the interjection of contemporary interviews with some of the survivors.

The physical and technological might of the early Soviet state bolstered by the sheer enthusiasm of the people is conveyed through the playful and at the same time elegiac mode of the film. The film deconstructs the Soviet myth in the very process of its cinematic reconstruction. The ambivalent comment made by the archivist at the beginning of the film: “Everything that happened should be filmed, and if it was filmed then it happened” alludes to this dual function of de/reconstruction performed by First on the Moon. It will be incorrect, however, to assume that the deconstruction of the myth aims at simply mocking the utopian ideals of the Soviet past. As the director of the film has commented in one of his interviews: “The element of irony is very small, perhaps five percent. The rest is something of an homage to the generation of our fathers or grandfathers, including their honesty, their genuine belief in an ideal.” The mystification of the Soviet past in this film, indeed, is not travestying but rather mourning the naïve enthusiasm of the previous generations. 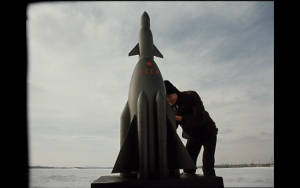 First on the Moon is conceived as a third part of Fedorchenko’s trilogy that illuminates the uneasy relationship between the state apparatus and its people. The first two films—David (2002) and Children of the White Grave (2002)—are documentaries about the survival of the people whose lives were subjected to the ruthlessness of state mechanisms, whether it was in the Nazi or Gulag camps, or Stalin’s mass deportation of ethnic groups. The third film, First on the Moon, develops this theme in the genre of mockumentary. This protean genre allows Fedorchenko to explore the theme of survival beyond the documented reality, adding to it a phantasmagorical dimension that borders on the verge of believable. The tragic overtones of the film’s mystification are powerfully conveyed in the penultimate shot, when the viewer sees cosmonaut Kharlamov literally left alone in the middle of cosmic space, completely fettered in his space suit. It is not clear whether this suit is devouring or protecting him. The ambiguous expression of his eyes full of either fear or hope (or both) amplifies the scene’s power. 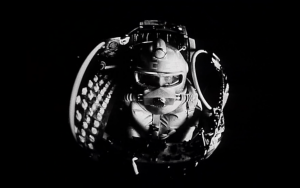 The mythical nature of the Soviet past is foregrounded through the direct citation of or allusion to films like Zhuravlev’s Cosmic Trip (1935), Eisenstein’s Aleksander Nevskii (1937), Vertov’s Man with a Movie Camera (1929) and Enthusiasm (1930), to name but a few. Perhaps the earliest film historical allusion that First on the Moon makes is to Méliès’ Trip to the Moon (1904). This hint to Méliès turns on its head the film’s documentary quality, which traditionally would be ascribed to the Lumière brothers.

The film also contextualizes the imaginary Soviet space program in the broader history of humankind’s endeavor to develop and enhance flying weaponry. In the prologue to the film, while the camera tracks illustrations in old manuscripts, the narrator tells the story of the technological development of weaponry in eleventh-century China, Renaissance Italy, and nineteenth-century imperial Russia. The main body of the film, however, subverts this history of technological progress and development. As the NKVD secret service cameraman boldly states in the middle of the film: “All of this already happened before… The human kind doesn’t learn from it’s own experience. Neither technological, nor moral progress can ever exist.” Instead of a history of progress the film offers a story of repetition, first as tragedy, then as farce, to borrow Marx’s reinterpretation of Hegel. Along with the story about the Soviet space program throughout the film runs a parallel story of the construction of a miniature-rocket in the contemporary setting. Instead of shock-workers of the 1930s a computer program is in charge of the production of the parts of the space rocket. The launch of the miniature-rocket that end ups with a miserable explosion toward the end of the film can be read as a farcical repetition of the grand Soviet project to conquer the moon. 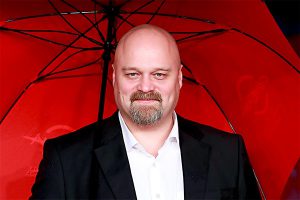 A native of central Russia, Aleksei Fedorchenko gained notice for his first feature-length film, the mockumentary First on the Moon (2005). He graduated from the State Institute for Filmmaking (VGIK) in 2000 and has since juggled producing, directing, and scriptwriting, becoming the head of Sverdlovsk Film Studio. His work has garnered numerous international awards.