Escape from Afghanistan is a film twice unknown. Produced and directed in 1994 by Timur Bekmambetov and Gennadii Kaiumov, the film played at international film festivals under the title The Peshawar Waltz, but was never released into wide distribution in Russia. The film was then reedited, given a new voice and soundtrack, and released to video in 2002 as Escape from Afghanistan, which was well received by connoisseurs of gritty war films but went largely unnoticed by the wider public. One can extend this chain of forgetting in several directions: it was the directorial debut of a director now known exclusively for the blockbusters that came later in his career; it treats, in modified form, a historical event that has largely been written out of history; it recalls the ugly last years of an empire that is recalled today more in the forms of nightmares and fantasies than as history. 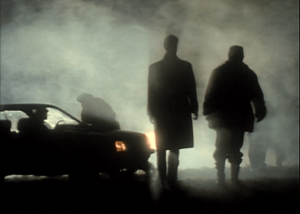 The film is loosely based on the so-called Badaber Uprising. During the Soviet military operation in Afghanistan, Pakistan and the United States, together with several other powers, operated a prisoner-of-war camp at the Badaber Fortress, located near Peshawar in Pakistan. In April, 1985, Soviet and Afghan prisoners at the fortress staged a revolt in which they seized weapons and occupied it. Unable to escape the fortress on their own, they entered into negotiations with local authorities in an attempt to obtain the protection of some international organization. These negotiations threatened to embarrass several powerful governments, all of which officially denied their military involvement in any Afghan civil war. The existence of the prisoners had become inconvenient and, as they were unwilling to surrender quietly, they had to be eliminated. Although the exact chain of events remains mysterious to this day, all inmates of the fortress were dead within two days of the start of their uprising.

In Bekmambetov’s 1994 version of the story, the burden of guilt is shifted decisively to the Soviet military forces, which launch an aerial attack on the fortress. The action of the film swirls around two westerners: a British documentary filmmaker and a French doctor treating victims of war under the auspices of Doctors Without Borders. These two visitors to the prison find themselves trapped where they certainly do not belong but where they nonetheless continue their work of recording and healing, respectively. They serve to structure the narrative of the film’s action while also remaining outside of it. Once the uprising begins, the film becomes exemplary of the war-film genre in which individual heroism and the struggle to survive is foregrounded against a fractious collective of soldiers who among themselves are also both victims and victimizers. While the film paints governments with a broad and negative brush, national stereotypes are eschewed in the film in favor of personal portraits. Whether English, French, Soviet, Afghan, or American, people are not marked by national color but by personal credos and fidelity to duty. Ultimately, the soldier’s duty to kill and the doctor’s Hippocratic Oath are equally validated and then rendered equally absurd as the action drives toward its tragic end. 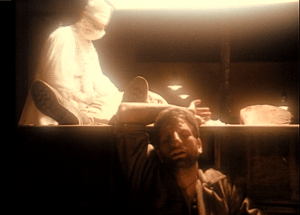 The modality of absurdity characterizing Bekmambetov’s 1994 film yields to a forced coherence in the 2002 reedited release. The British journalist Charlie Palmer becomes the American journalist Charlie Palmer, but even more important as his new nationality is his larger narrative role. Palmer’s voice (Kushner’s Liverpool accent is dubbed throughout with an American voiceover) becomes a behind-the-scenes, first-person but all-knowing narrator, ruminating with somewhat vapid philosophical pretention on the tragedy and ubiquity of violence and war. The struggle of the Soviet POWs also undergoes a shift—under the almost anthropological gaze of the American journalist, their behavior, their speech, and their aggression becomes exotic and strange. Less than a year after the Al-Qaeda terror attacks in the United States, Escape from Afghanistan has modified the earlier sense of absurdity and despair into one of grim but purposeful determination. As a result, Palmer’s final shocking act becomes, if not less powerful, then certainly more weakly motivated.

Thus the two versions of the film respond to the tenor of their times. While the American version of the film responded to the resurgence of aggressive patriotism in the United States after the terrorist attacks, Bekmambetov’s film revisits a painful episode in the life of the country not to glorify it and certainly not to establish the historical truth. The desolation at the end of the film invites its viewers to forget a history that cannot be made sensible or integrated into post-Soviet Russia’s own story. It remains only to wonder at the remarkable contrast that this film provides to Bekmambetov’s other major project of the 1990s: his ground-breaking series of television ad spots for Imperial Bank. Bekmambetov (like many of his fellow filmmakers) deliberately shifted his focus from cinema to television in the 1990s specifically to find the audience that no longer went to the movies. While his private (because seen by no one) verdict on the Soviet apotheosis suggests that the imperial project is a nightmare fit only for oblivion, the message that he projected through the most democratic medium suggests a dream world of beauty, nobility, and discipline that can exist only in fantasy. Who decides whether this fantasy is oriented toward the past, or toward the future? 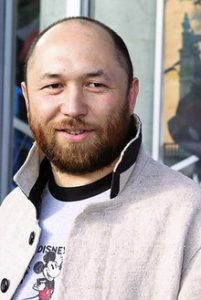 Timur Bekmambetov was born in 1960 in Kazakhstan. After completing a course of study at the Uzbek Theater and Art Institute in 1987, Bekmambetov moved to Moscow. His first film, The Peshawar Waltz, remained his only film for many years as he worked almost exclusively in television advertising. His career as one of Russia’s most successful film directors began with the release of Night Watch in 2004. Bekmambetov has continued his successful career in both Russia and Hollywood as a director, screenwriter, and film producer.