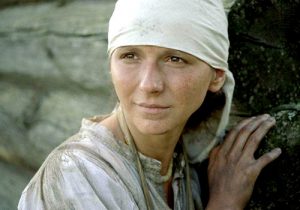 Harvest Time tells the story of Antonina Guseva (Liudmila Motornaia), the only woman combine operator in the district. Antonina has to support her husband, Gena (Viacheslav Batrakov), who lost his legs in the war, and their two little boys. She is a shock worker at the collective farm and works especially hard in hopes of winning a bolt of calico cloth for a dress. Instead, she is awarded the prized Soviet banner, signifying her victory in socialist competition. Placed in Antonina’s house, the banner becomes a favorite snack for hungry mice.

The need to protect the banner, to mend its destroyed pieces, and to work ever harder to prevent the discovery of her dark secret, leaves Antonina no energy for loving her family, which, the narrator suggests, leads to the family’s eventual downfall. Antonina’s unfulfilled and unrealizable dream of a piece of calico and its substitution by the destructive banner is an ironic comment on the way Soviet reality endowed material objects with magical power. As the film illustrates, the magical quality applies to the material objects for everyday use, such as calico, due to their scarcity, as well as to objects with symbolic significance, such as the banner. The connection between the banner and the destruction of Antonina’s family turns Soviet symbols into a kind of dark occult force. 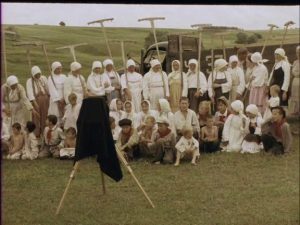 Harvest Time is set in rural Chuvashiia, an ethnic territory, whose population espouses pagan and Christian beliefs. In her interviews, Razbezhkina claimed that this aspect of Chuvashiia was important for her conception of the film. At the same time, the combination of paganism, Christianity, and Soviet ideology does not appear as ethnically specific and, instead, seemingly applies to the Soviet rural environment as a whole. Initially the heroine successfully combines her diverse beliefs and incorporates Soviet ideology into her everyday life, yet the Soviet system eventually destroys the rural idyll of her family. Symbolically, Antonina places the banner between herself and her husband in their bed, suggesting her complete interpellation by the state. Her final return to native pagan roots, in an attempt to save her husband through shamanistic rituals, is belated, and the spirits reject her sacrifice.

The image of Antonina draws on a long Russian/Soviet tradition of connecting a female archetype to idealized Russian rural life. For example, it inverts Stalinist cinema’s trope of female collective farm workers, whose beauty and association with the land represent a utopian promise. Whereas the Stalinist heroines’ victories bring them prosperity and recognition, Antonina’s victories in socialist labor result in unhappiness and alienation from the family and village community. Similarly, the film creates a more complex relationship between Soviet culture and rural traditions than those presented, for example, in “village prose.” Unlike “village prose,” that focuses on the purity of village life, Razbezhkina’s film hints at the complex process of the Soviet subject’s interpellation by the state.

If interpreted from a post-colonial or a post-imperial perspective, the film suggests the colonization of rural culture by the foreign Soviet ideology, symbolized by the banner. Ironically, the banner simultaneously destroys Antonina’s family and is destroyed by the native element, the devouring mice.

While the film begins with the narrator’s description of the family’s old photos, at the end of the film, these same photos end up in the rubbish heap outside of dead Antonina’s urban apartment. Antonina herself dies abandoned and forgotten. Therefore, the film demonstrates a kind of double erasure: first the rural idyll is erased by the colonizing Soviet system, and then the Soviet sacrifices of the previous generations are erased in post-Soviet memory.

The loss of memory is a prominent theme in the film. The film is narrated by Antonina’s youngest son from beyond the grave, documenting the loss of a family and an entire way of life. The narrator fails to recall the people recorded on the childhood photographs, repeating “I do not remember” as a kind of incantation. The narrator further wonders where he once read the phrase, “You have abandoned our memory of you so completely that you don’t even return to our dreams.” The odd turn of this phrase suggests an ambiguity at the center of the film: who has to remember the Soviet past and how should it be remembered? 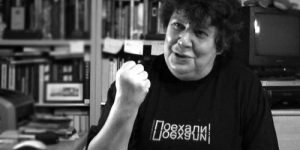 Marina Razbezhkina is an established documentary filmmaker, producer, scriptwriter, and mentor. She is a recipient of more than twenty-five international and domestic awards. Her first success came with The End of the Road (1991) which took first prize at the Amsterdam International Festival of Documentary Film. She is a director of Antipode Studio and a co-founder and co-director, together with Mikhail Ugarov, of the Documentary Film and Theatre School.