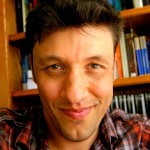 Petre Petrov holds a PhD from the Department of Slavic Languages and Literatures at the University of Pittsburgh (2006), where he participated regularly in the organization of the Russian Film Symposium. Currently, he is an Assistant Professor of Russian at the University of Texas at Austin. His primary research relates to Stalinist culture and ideology in the context of European aesthetic and philosophic modernism. He is the author of Automatic for the Masses: The Death of the Author and the Birth of Socialist Realism (University of Toronto Press, 2015) and co-editor, with Lara Ryazanova-Clarke, of The Vernaculars of Communism: Language, Ideology and Power in the Soviet Union and Eastern Europe (Routledge, 2015). He has published articles on Soviet cinema, socialist realism, modernist literature, cultural and literary theory, and semiotics.