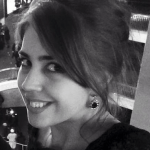 Dasha Ezerova is a PhD candidate in the Slavic Department at Yale University. She holds a Specialist degree in Translation and American Studies from Moscow State University. Her research interests span a wide range of topics, with a particular focus on Post-Soviet film and fiction, the cinema of Aleksei Balabanov, the 1990s, and contemporary popular culture in Russia. She is an organizer of the Yale Slavic Film Colloquium and Russian Film at Yale series.

She is currently working on her dissertation, tentatively titled The Shock of the Post-Soviet: The Afterlife of Soviet Myths in Film and Literature after the Fall of the Eternal State.