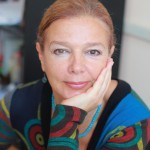 Larisa Maliukova is a leading Russian film critic, scriptwriter, and publicist.  She graduated from the State Academy of Theater Arts in 1980.  She received her Doctor of Philosophy in 1985 (with a thesis on the interaction of arts: theatre and cinema). Her articles have appeared in Novaya Gazetta, Iskusstvo kino, Seans, Teatr, Sovetskii fil’m, Sovetskii ekran.  Her book Beyond/Cinema, the first systematic study of modern Russian animation, was awarded the White Elephant by the Guild of Film Scholars and Critics.  She has written film scripts for several documentaries, including Frida versus Frida, Diego Rivera in the Land of Bolsheviks, Look at the  Sky!, Pushkin Square, If not for Kolya Shatrov… , and German and Carmalita.