Elki 2, like its predecessor, Elki (2010), consists of six interconnected subplots with one major plot uniting the rest of the novellas into a single narrative. Elki 2 also repeats the tradition of beginning the film with a visual presentation of a map of Russia and an emphasis on how huge and powerful the country is. In the earlier film, however, the focus was on the unity of the country as a whole, despite its numerous time zones, due to the celebration of two major holidays: a successful win by a Russian football team and the New Year. The pronouns “we” and “ours,” which resound multiple times, are indicative of the unity and solidarity of the country, which is also reminiscent of the spirit of the Soviet Union.

These imperial notes continue in Elki 2. Here, however, the narrative is developed in a slightly different direction, although generally consistent with the hegemonic line established in the earlier film. Elki 2 begins with the statement that all people are brothers and sisters, as the map shows not only Russia in all its magnitude, but also its neighboring countries—Kazakhstan in particular. The voiceover (Kostantin Khabenskii) mentions that wherever we are—in St. Petersburg or Astana—on New Year’s Eve “we are all one” as we decorate our trees and chop salads. Thus, the line of alleged cosmopolitanism is defined from the very beginning and sets the tone for the rest of the film.

This theme is further developed in one of the subplots of the film—in a romantic love story of a Russian girl, Alena (Alena Konstantinova), the daughter of a harsh policeman Vetrov (Sergei Bezrukov), and Aslan (Iznaur Ortsuev), an Asian guy from Chechnia (novella “Romeo” by Aleksandr Kott). The feelings of these young people are unacceptable to their fathers because of their ethnic backgrounds. At the end of the film, however, after a series of peregrinations, the two loving hearts are united at the hospital, as each of them, though in different circumstances, breaks a leg, with a symbol of their love, a wing, tattooed on each of them. Their fathers, although hostile at first, have to submit to the feelings of their children, thus establishing a friendly relationship not only between themselves but also between nations—a classic Soviet sentiment. 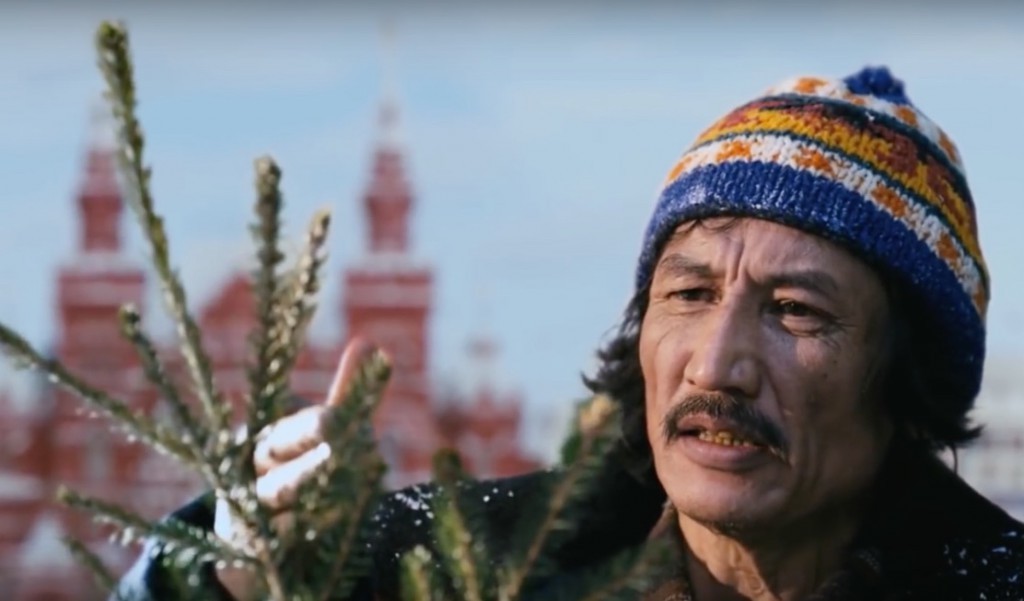 Reconciliation between nations would be one of the most compelling topics of the film if only the street cleaner in Red Square were not Asian. In spite of the sentimental Romeo and Juliet story that is dragged through the entire film, the Asian street cleaner represents a state of inequality and an actual perspective of Asians within Russian society. Ironically enough, it is this character who explains the unity of the country and people to Pasha (Nikita Presniakov) using a visual image of a Christmas tree.

In the novella, in which Boria (Ivan Urgant) is trying to reunite with his ex-girlfriend, Olia (Elena Plaksina), in spite of his amnesia (novella “Amnesia” by Dmitrii Kiselev) the friendly attitude towards foreigners is further questioned. Olia’s new boyfriend, the Frenchman Francois, hates all Russian New Year traditions—decorating trees, the “oliv’ie” salad, and the traditional Soviet New Year film, The Irony of Fate (Ironia Sud’by, 1976). The tradition of decorating a fir tree on winter holidays is not solely Russian, though. The French have trees for Christmas and the New Year, which is why Francois’s allergy to trees is an explicit exaggeration. The petty-bourgeois lifestyle of Olia and her mother, Natal’ia (Galina Kon’shina) suggests that the virtues of globalization have already reached their house, where imported goods, like blue cheese or aged wine are available to them. Yet, Natal’ia behaves like a Soviet woman still living behind the Iron Curtain, and she throws away the “bad” French food Francois brings and continues to talk about the green peas she needs for her salad. As in Soviet times, the Western world is pictured as an embodiment of everything negative; so an understanding between Russia and the West is ultimately impossible. This novella is nostalgic for Soviet life throughout, as well as xenophobic in its attitude towards the West. 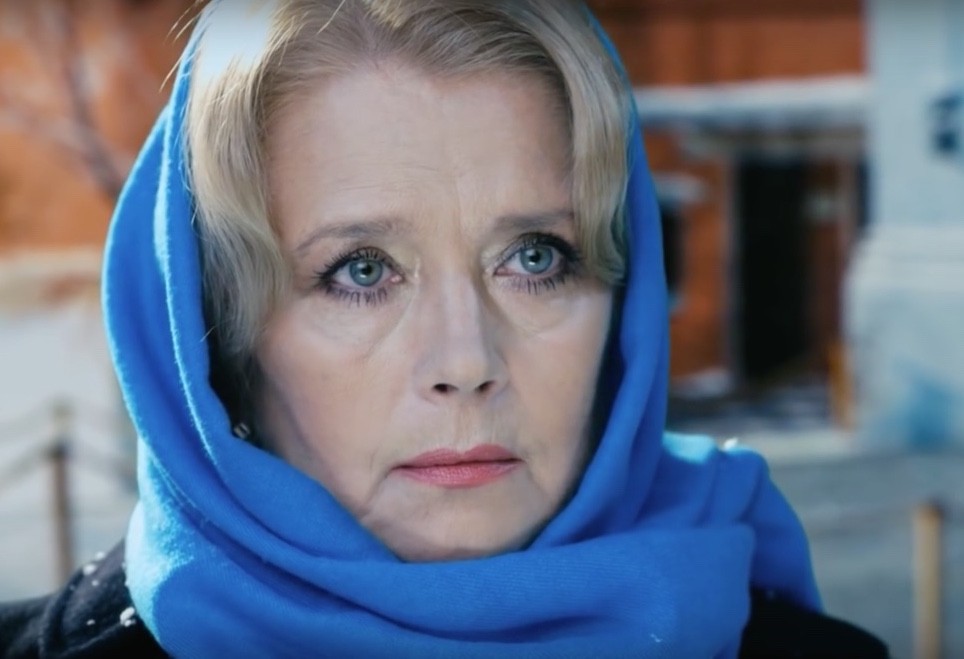 It is noteworthy that Olia, and as it turns out later, her brother Pasha (Petr Fedorov), who is trying to reunite with his family by visiting his daughter dressed up as Ded Moroz (novella “Ded Moroz” directed by Aleksandr Baranov), bear a Ukrainian family name—Kovalchuk. Whether it is a deliberate choice or an unintentional use of the name, it says a lot about the vision of Ukrainians within this brotherhood of nations—as amalgamated elements without any distinct national features.

The most obvious nostalgia for the Soviet Union is depicted in the “master novella” of the film, in which Iulia Snegireva (Irina Alferova), receives a letter from her beloved after it was lost for forty years (novella “The Chimes” directed by Levan Gabriadze). In this letter, a young pilot, Grigorii Zemlianikin (Aleksei Petrenko), tells her that he will be waiting for her on New Year’s night under the clock in Red Square. Iulia immediately comes to Red Square in Moscow from Astana, wearing the same blue scarf she used to wear in 1971, and stays there in the winter cold all day until midnight waiting for her beloved. After the anxiety of the long wait and all of the adventures Grigorii undergoes that night (novella “Airplane” directed by Aleksandr Kott), he finally comes to meet Iulia and suddenly stumbles, turning into the young pilot he used to be forty years ago, after which both of them finally find themselves in the beautiful Soviet past of their youth.

It is notable that their meeting is mediated by Grigorii’s cousin, Igor’ (Viktor Verzhbitskii) who also used to be in love with Iulia. Igor’ is a politician, who turns out to be surprisingly benevolent. First, he releases two teenagers who caused a road accident with a bathtub and broke his luxurious car, and later he lets Grigorii know about Iulia waiting for him in Moscow. The theme of humane and reachable politicians who always hear peoples’ needs proceeds from the previous Elki. In the earlier film, it is President Medvedev himself who participates in the narrative, saving a little girl’s life by saying certain words in his New Year’s speech. The idyll of magnanimous politicians of any level promoted in both films, however, is as true to life as the rest of the stories.

As a whole, the film tends to emphasize the welfare of the Russian people in modern times, yet lapses into Soviet mythology. At the same time, the harsh truth of poverty and the underdevelopment of certain regions is still palpable in the stories of an old woman happy to obtain a bathtub from a politician (novella “Bathtub” by Dmitrii Kiselev) or in the airdrome novella, in which a young boy, Andrei, suffers because of the unavailability of a telephone connection. In general, the film has lost all of the humor of the previous comedy, the development and justification of the subplots are weak, the dynamics are too slow and the film succeeds only from the names of actors in its cast. 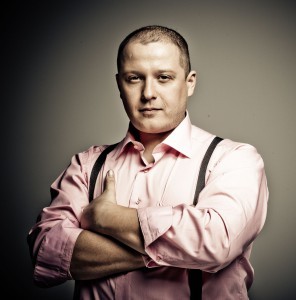 Dmitrii Kiselev was born in Moscow in 1978 and graduated from Moscow Technical University of Telecommunications and Information Technologies. He has been working in Timur Bekmambetov’s team since 1997. Kiselev is most famous for his films Elki 2 (2011), Black Lightning (2009), and Gentlemen, Good Luck! (2012), as well as promotional trailers for Day Watch (2005) and Especially Dangerous (2008). 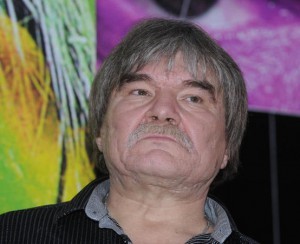 Aleksandr Baranov was born in 1955 in Alma-Ata. He graduated from Gerasimov Institute of Cinematography, Department of scriptwriting, in 1985. His first work as a director is The Three [Troe] (1988) made in co-authorship with Bakhyt Kalibaev. The film was awarded four Grand Prix at the festivals of “Debut,” “Molodost’,” and “Sozvezdie.” He is one of the authors of the script for Igla (1988), with Viktor Tsoi starring in it. Baranov worked as a director, scriptwriter, and producer of Shanhai (1996), which received an award at the “Zolotoi Vitiaz’” Kyiv Festival. 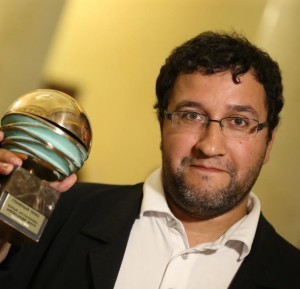 Aleksandr Kott was born in 1973 in Moscow. He is the twin brother of Vladimir Kott, also a film director. After graduation from the School of Aesthetic Education at the Theater on Red Presna in 1990, he worked as a photographer. Aleksandr participated in several photo exhibitions: “Gallery on Pirogovka,” museum of GITIS, Academy of Culture. In 1994 he began his studies at Gerasimov’s Institute of Cinematography. In fall 1997 he participated in Andrzej Wajda’s master-class in Krakow. In 2000 he completed his studies. In 2001 his debut film, Two Drivers Were Going was released. The film received “the best director’s work” award at the “Kinoshock” festival. In 2006 he made a screen version of Lermontov’s novel Hero of our Time. In November 2012 his 16-episode TV show, The Reverse Side of the Moon, an adaptation of a BBC TV show, was released. In 2014 Kott’s Test received the main prize at the “Kinotavr” festival. 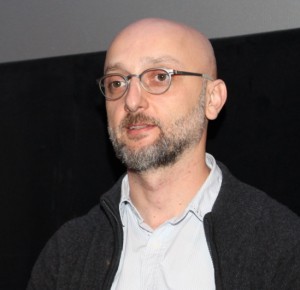 Levan Gabriadze was born in 1969 in Tbilisi into the family of the drama and prose writer Rezo Gabriadze and musician Elena Dzhaparidze. At the age of 12 Levan began to work as an assistant and actor at his father’s theater. When he was 17 he was invited to play one of the leading roles in Kin-dza-dza (1986) by Georgii Danelia. He graduated from Shota Rustavelli Theater Institute with a major in acting. In 1990 he began his studies at UCLA, Department of Design and Animation. In 2000 he moved to Moscow where he became a TV commercial director at Bazelevs film studio. In 2010 he made his first full-length film, Vykrutasy, which received the “Zolotaia taiga” prize at the “Dukh Ognia” (Spirit of Fire) festival in Khanty-Mansiisk in 2011.