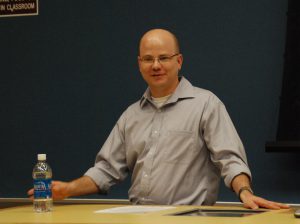 Stephen M. Norris is Professor of History and Interim Director of the Havighurst Center of Russian and Post-Soviet Studies at Miami University (OH).  He is the author of A War of Images:  Russian Popular Prints, Wartime Culture, and National Identity, 1812-1945(2006) and Blockbuster History in the New Russia:  Movies, Memory, Patriotism (2012).  He is the co-editor of three other books, including Insiders and Outsiders in Russian Cinema (2008).   He is completing an edited volume entitled Museums of Communism:  New Sites of Memory in Central and Eastern Europe, which will appear soon with Indiana University Press.  His ongoing research project on Boris Efimov, the Soviet political caricaturist, is entitled Communism’s Cartoonist:  Boris Efimov and the Soviet Century.  He also serves as co-editor of KinoKultura and book review editor of Studies in Russian and Soviet Cinema.