Everybody Dies But Me
[Все умрут, а я останусь] Russia, 2008
Color, 80 minutes
Russian with English subtitles
Director: Valeria Gai Germanika
Screenplay: Iurii Klavdiev, Aleksandr Rodionov
Camera: Alisher Khamidkhodzhaev
Music: Sergei Ovcharenko
Cast: Agniia Kuznetsova, Polina Filonenko, Olga Shuvalova
Producer: Igor’ Tolstunov, Dariia Khliostkina
Production: PROFIT (Igor’ Tolstunov’s Production Company)
Valeria Gai Germanika’s drama tells a story about one week in the lives of three teenage schoolgirls—Katia (Polina Filonenko), Vika (Olga Shuvalova), and Zhanna (Agniia Kuznetsova). Although a film about teenagers, Everybody Dies But Me can be ranked as a film primarily for adults. The narrative of the film is marked by a marginality that is first of all grounded in the transitional age of its protagonists. Germanika explicitly emphasizes the divide between the world of children and the world of adults, life at school and life at home, between boys and girls, junior and senior students, friendship and hatred. The fact that the three main characters are females also brings the discourse of gender into question, as well as the interaction between men and women viewed from the position of a female director. 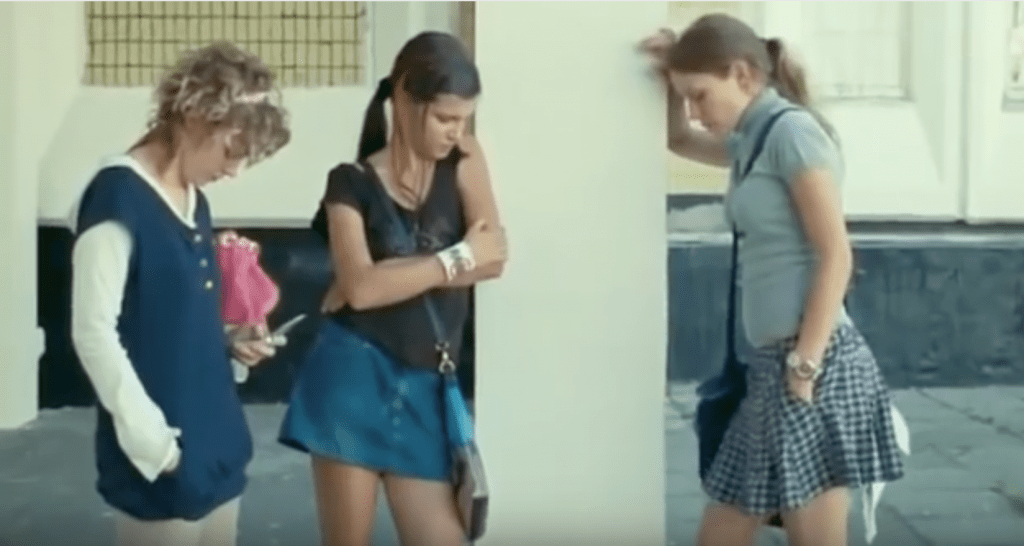 The funeral of a cat at the beginning of the film mockingly supports the childish statement in the title—“Everybody dies but me!” For the teenage girls all of life is still ahead and, of course, death is for somebody else. The funeral topic, in the meantime, underlies the whole film. In Katia’s family someone has died, and leftovers of funeral food seem to frame the story, beginning with the funeral itself on Monday and the commemoration on on Sunday. The optimistic statement charged with teenage maximalism is undermined by the finality of the world of adults, to which the three girls aspire in their desire to grow up. “I wish all adults would die!”—says Zhanna at the beginning of the film, but metaphorically turns into a dead body herself as she eventually gets drunk.

When a school disco is announced to take place on Saturday, it becomes the main event and the ultimate goal in the girls’ lives. The film can be divided into two parts—preparation for the disco and the disco itself. The highly anticipated event is seen by the girls as the most important point in their lives, a point of finally growing up. Yet the way they cross the border between childhood and adulthood appears to be completely different from what they imagined.

The complicated relationship between the teenage girls and their parents makes the drama even more serious. When Katia comes back home and looks at her new piercing in the mirror, her father accidentally sees it and begins to beat her cruelly, while her mother adds another slap to her face. The whole scene takes place in complete silence, with only sounds of beating and Katia’s moaning being heard, which contributes to the gravity and funereal flair of the situation. After the harsh beating, the father suddenly hugs his daughter as if nothing had happened, yet the feeling of horror does not dissolve in the air immediately. 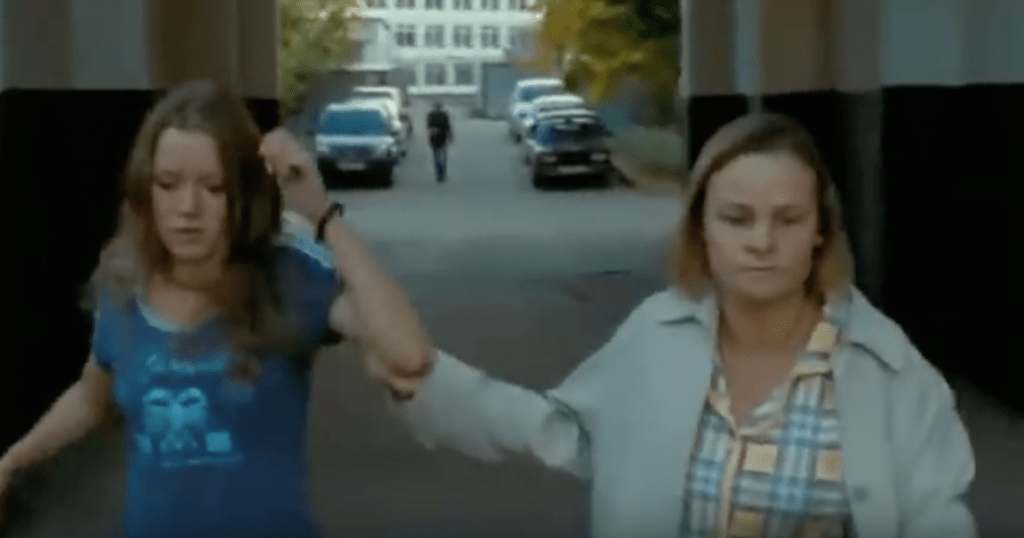 Katia is a difficult teenager, whose parents have long lost the ability to communicate with her. There is no doubt that the parents want only the best for their daughter, but they are unable to choose the right methods to deal with her. A similar loss of connection between daughter and parents is visible in Zhanna’s family. After she has buried her father’s favorite goldfish with the cat, her mother inquires about the fish. Without saying a word, Zhanna goes to the bathroom and attempts to commit suicide. After the failed suicide, her mother is ready to do anything for her daughter. The attempt to manipulate her parents turns out successfully and Zhanna will continue this practice. “She is in my fist,”—she says about her mother when Katia stays overnight without telling her parents where she is.

While at the beginning of the film the three girls pledge life-long friendship and loyalty to each other, the vow is quickly broken as a threat of the disco being cancelled comes around. When Zhanna and Vika encounter senior girls in the school restroom, they do not want to be in conflict with them, whereas being friends with Katia could bring them problems. This is why Zhanna persuades Vika that they should avoid dealing with Katia. When Vika explains to Katia that Zhanna and she will go to the disco together without her, Katia is unpleasantly struck by the behavior of her best friends. “So ‘we’ does not include me anymore?” she asks in frustration.

Katia’s disappointment grows even more when she returns home. Her parents promise never to beat her again and seem to repent their previous behavior but the solutions they suggest are unacceptable to their teenage daughter: from now on Katia’s father will take her to and from school, and she will have to stay at home most of the time, which means no disco for her on Saturday. She begins to stomp on the floor hysterically screaming for help. Locked at home with no friends left Katia, comes up with a plan and befriends a geek girl in order to use her later.

As the long-coveted disco approaches, the madness around it, as well as around the discourse of having adult fun and being cool increases. On their way to the disco Zhanna and Vika drink alcohol, Zhanna smokes, Vika burns a kind of voodoo doll trying to get rid of Nastia, her rival in the competition for Aleks, a school macho. Germanika is very accurate in portraying the behavior of teenage girls aspiring to join the community of the “cool” senior students, smoking and drinking in the women’s restroom. The suburban culture is revealed in the dull landscapes of high-rise buildings, the girls’ cheap outfits with a claim to high fashion, as well as the language they use.

When the day of the disco finally arrives, the paths of the three girls diverge as they go through different experiences of growing up. What unites them is that they all cross a certain border—between childhood and adulthood, virginity and sexual experience, friendship and alienation. Zhanna is eager to dance and enjoy the disco, she wants to have fun and become a part of the senior girls’ cool gang, but drinks too much and passes out in the first fifteen minutes, before the disco really begins. Vika is in love with Aleks and wants to win his attention, yet ends up in the company of a random drunk guy. Finally, Katia, who escapes from her oppressive parents and gets to the disco in spite of all obstacles ends up having sex in a dark dirty basement with Aleks, Vika’s love object. Katia wants to find a boyfriend who would replace the family for her but is cruelly beaten by Nastia, a senior student in the school, in front of her peers who do not even have pity for her but record the scene on their smartphones. Having crossed the border into adulthood, the three girls will never be the same again. The disco has become a milestone in their lives that has influenced their relationship to the world and marked their attitude towards themselves and the others. 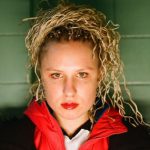 Valeriia Gai Germanika is a Russian film director whose work is dedicated to the topic of coming-of-age. Born into a Bohemian Moscow family and trained at the Internews Cinema and Television School, Germanika started directing at age nineteen. Her second film, The Girls, and subsequent The Birthday of Infanta (both documentaries) were screened at the Kinotavr Film Festival. In 2010 Channel One showed Germanika’s 69-episode TV series School, portraying teenagers’ life in an ordinary Moscow school.