As any other review will also tell you, the film is called Chekhovian Motifs because it is based on two of Anton Chekhov’s lesser-known texts, the short story “Difficult People” and the parody play Tat’iana Repina.  The two proto-plots are attached to each other by means of a character from the first one, a young man (Filipp Panov) who gets involved in a row with his father over money, leaves the house, and meets, on his way to a station, a guest hurrying to the wedding from Tat’iana Repina.  About 40 per cent of the screen time is then given to a “life-size” (and seemingly larger-than-life) reproduction of an Orthodox wedding ritual, interlaced, just as in Chekhov’s joke of a play, with inappropriately random conversations of the guests.  That the film bears neither one of the titles nor a combination of them, academic paper-style (The Mystery of Tat’iana Repina: Difficult and Dead People in Chekhov, perhaps?) can be explained by the fact that Muratova and her writing partner and husband, Evgenii Golubenko, added things here and there to the point where the director herself could not remember where Chekhov’s texts ended and their script began.  In preparation for the project, moreover, Muratova read more than just the two works by Chekhov, so it would indeed be fair to say that there is some extract of Chekhov’s characters, themes, or motifs present in the film. 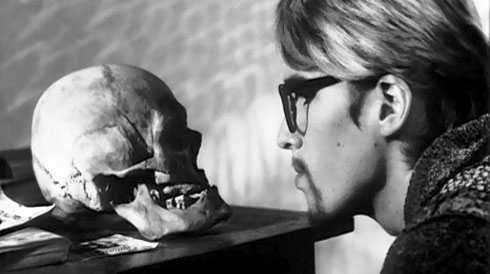 If one links the term “motif” back to music, it is easy to see Kira Muratova’s film as a “variations on a theme,” a musical development of one or two basic melodies, taking them through various repetitions and permutations.  Muratova’s long-standing position as an auteur undoubtedly justified this reading in the eyes of many critics and festival audiences.  Some even said that Muratova’s film related to nothing but Muratova, and Chekhov was only a pretext.

It is easy, however, to attribute a number of elements or “motifs” in the film to Chekhov.  In the formulaic and textbook-based tradition of Russian school curriculum and popular culture, classical writers for more than a century have been distilled into a handful of useful slogans. Pushkin is quite simply “our everything”; Gogol’ is “a rare bird that flies to the middle of the Dnieper”; Dostoevskii – “am I a trembling creature or do I have the right?;” Lev Tolstoi is “Count Andrei’s oak tree;” and Chekhov is “squeezing the slave out of you drop by drop.”

In fact, perhaps due to his supreme mastery as a short story writer, a number of Chekhov’s turns of phrase and stock tricks have entered the common repository of knowledge.  Almost anyone would be able to say that Chekhov is about tragedies that happen while people are simply having tea; he is about the slow death of the noble class and the intellectual bankruptcy of the intelligentsia; he’s about suicides that happen off-stage; he is all about rifles that hang on wall and absolutely have to go off in the last act.  This last was actually advice given to the writer by Nemirovich-Danchenko, but it is emblematic of Chekhov’s position in contemporary culture: it does not matter anymore if these “motifs” are facts or myths.

If the rifle is missing in Chekhovian Motifs, at least the intelligentsia is most definitely still there; and it still struggles.  In fact, with the appearance of Aleksandr Bashirov at the very beginning of the film, we are firmly in a Chekhovian world of nonsense, down the rabbit hole of provincial Russia.  Its topoi remain the same: a yard, a dining room, a road, a church.  It is even black-and-white, like something that Chekhov himself might have seen on the screen.

It is hard to say what the black-and-white aesthetics of the film serves exactly.  In its second half, of course, it turns the bride (Natal’ia Buz’ko) into a silent melodrama heroine, with her heavily made up eyes and a pout reminiscent of the two Veras: Karalli and Kholodnaia.  The action loses a time stamp, a direct connection to any time, as words from the late 19th century clash with cars and clothes from the late 20th century.  It presents a slice of time (especially in the wedding scene), and a unique take on the concept of “mummified time,” perhaps even a reflection on cinema and its history.  There is also a sense of her own, “Muratovian,” motifs repeated, perhaps due to her trademark combination of established actors, typages, and former members of a farce TV program Maski Show, which was known for its slapstick and utterly silent lowbrow comedy, thus contributing to the dislocated silent cinema effect. 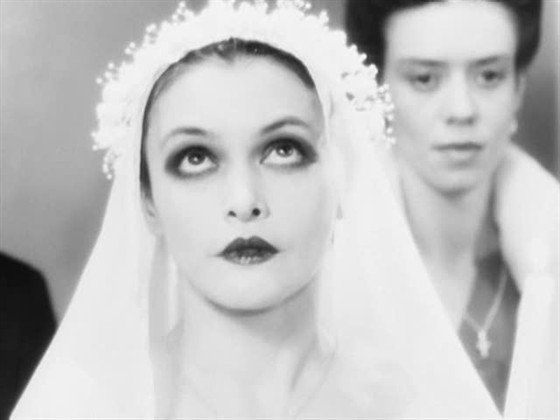 Chekhovian Motifs is a silent film that struggles to speak.  It is possible that the decision to shoot the film in black-and-white is directly related to the fact that Muratova strips the dialogue down to the language of children. They slowly acquire speech by mindlessly repeating the outer form of words and phrases used in their hearing—“It’s a barn! It’s a shop! It’s a barn! It’s a shop!” or “Porridge, porridge, television, porridge, porridge.  Baits, baits, porridge, porridge, television…”—are equally valuable to their interactions with the world even if they are equally meaningless to grown-ups.  Meanwhile, Muratova’s grown-up characters also have difficulty expressing their emotions and thoughts, especially in the heat of the moment (and there are many such moments).  They talk incessantly about being silent; they beseech their interlocutors to listen to them but don’t say anything beyond the repetition of this appeal.  The dialogue is a hay-stack of unrelated words that might contain a needle of meaning.

Chekhov himself was attuned to the discrepancy between sincere feelings and stilted words: his three sisters repeat “To Moscow! To Moscow!” until the words lose their meaning completely.  The “much-esteemed bookcase” of The Cherry Orchard, the “people, lions, eagles, and partridges” of The Seagull, not to mention snippets of songs and billiards terminology used as fillers are also “Chekhovian motifs.”  “Murderous repetition” (Jose Alaniz) is not only Muratova’s trademark, it is Chekhov’s as well.  The difference is only in degree.  Chekhov’s theater is more than anything else the comedy of repetitions.  In Muratova, the verbal repetitions rise to the level of trans-sense poetry, together with pauses that provide counterpoint to the sound fragments and add to the feeling of a mad silent movie that suddenly burst into speech.

In a way, Woody Allen in his mishmash parody of Russian literary classics, Love and Death (1975), comes surprisingly close to this Chekhovian combination of the outrageously absurd, the poignantly ironic, and the underlying sense of resignation, evident in Muratova’s film as well.  Some critics maintained that the dominant mood of Chekhov that Muratova had been able to reproduce in the film was his sense of being tired of people.  However, Chekhov himself famously insisted that his Cherry Orchard, despite all the heartbreak and melodrama on and off the stage, was in fact a comedy and had to be performed as such.  And, just like Chekhov, Muratova asserts that if not all then many of her films contain elements of comedy, with Chekhovian Motifs being essentially a dramedy. 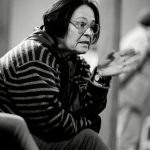 Kira Muratova was born in 1934 in a small town Soroki in what was then
the Kingdom of Romania (now in Moldova).  She graduated from the film
directing department of the State Institute of Cinematography (VGIK)
where she studied under director Sergei Gerasimov and actress Tamara
Makarova.  Muratova made her first several films together with her
husband, Aleksandr Muratov.  Her first solo project was Brief
Encounters (1967), in which she also performed one of the main parts.
The next film, Long Farewells (1971) was shelved and only released in
1987 when it received an award at the Locarno Film Festival.
Following official criticism of several of her films, for a number of
years in the 1980s Muratova was banned from filmmaking.  Since her
return, she has been awarded multiple prizes in Russia, Ukraine, and
in Western Europe, and is considered one of the major auteurs of
Soviet and post-Soviet cinema.