Andrei Kravchuk’s medieval epic, Viking, is essentially a prequel.  Vladimir the Great’s best known contribution to Kievan Rus’, the medieval precursor to modern day Russia, was his renunciation of the native polytheistic religion and conversion to Christianity in 988.  This film, clearly assuming that its entire audience already knows how the story will end, shows Vladimir in the years leading up to this event.  This allows the filmmakers to devote most of the screen time to spectacles of sex and violence as Vladimir (played by star actor Danila Kozlovskii, who can also be seen during the symposium in Nikolai Lebedev’s Air Crew) takes control of his kingdom and secures it against a variety of internal and external threats. 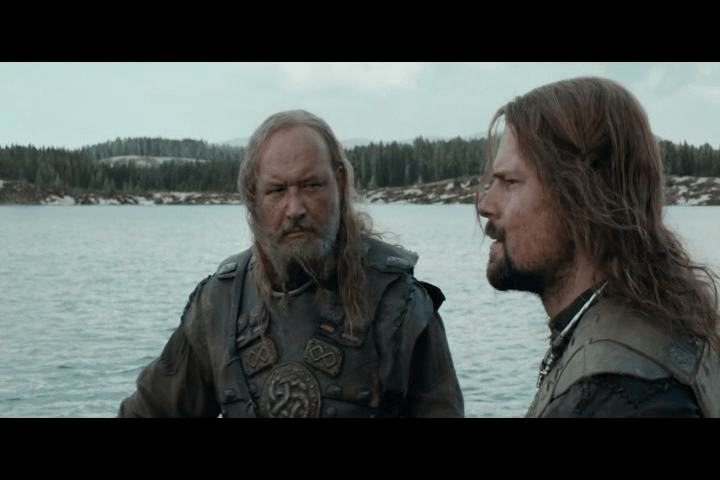 The film was produced as a part of Russia’s 2016 Year of Russia Cinema, which saw additional state funds offered to the film industry in an attempt to improve the quality of film making and exhibition. Many critics have called the effort a failure—due in large part to the lack of good films that resulted from it.  If, however, the goal of the program was to dispel the greatest spectre haunting Russian cinema—the spectre of Hollywood—then Viking is a clear marker of its success.  Technically the film is well made; if one were to watch it with the sound off it could easily be mistaken for a particularly uninteresting and darkly lit episode of Game of Thrones.  The film relies heavily on special effects, but there is even a confidence evident in its use of special effects typical of Hollywood filmmaking, which blend seamlessly into the action rather than aggressively calling attention to themselves as in the work of Timur Bekmambetov (Night Watch and Day Watch), for example.  This technical excellence masks a boring plot filled with absurd twists (try not to groan audibly when Vladimir’s answer to a cavalry charge is to slide boats down a hill in the direction of the horsemen) but this, too, is fairly typical of Hollywood Cinema; nothing that happens in this film is any stupider than anything that happens in Transformers 3.  Even more important for the dispelling of the spectre of Hollywood was the film’s popularity with movie goers, despite the terrible reviews it received from most critics.  Like Air Crew and Nikolai Khomeriki’s Ice Beaker (2016), two other members of the cohort produced by the Year of Russian Cinema, Viking had significant success at the box office, eventually returning a significant profit on its 1.25 billion ruble ($22 million) budget.

Like many other historical epics made recently in Russia, Viking makes itself available for an allegorical reading that sees the film’s events as a historical analog for contemporary concerns.  The spectre of the Ukrainian conflict is particularly evident in the film.  The claim to the rightful inheritance of the legacy of Kievan Rus’, for example, is hotly contested by Russian and Ukrainian nationalists (the former cite their shared roots as evidence that Russians and Ukrainians are really “one nation,” while the later angrily denounce the Russian appropriation of “their” heritage) so the subject of the film itself can be seen as a nationalist intervention.  Similarly, the film’s climax involves the capture of the Byzantine city of Korsun’, which was located on the site of the present day city of Sevastopol’, the largest in Crimea. Vladimir’s largely bloodless acquisition of the city in the film can be seen as a sort of reenactment-before-the-fact of Russia’s annexation of the peninsula. 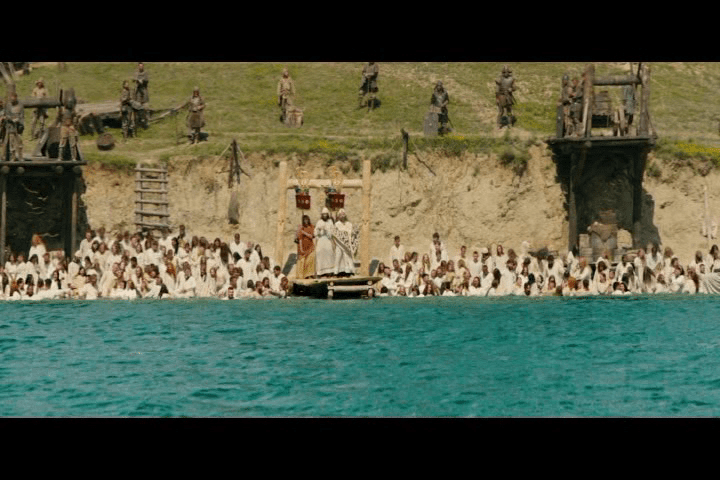 Similarly instructive is the model of leadership that the film champions.  At the end of the film, as Vladimir prepares to convert to Christianity he confesses his sins in a scene that is clearly intended to be the emotional center of the film.  Kozlovskii’s decidedly un-nuanced acting makes clear that this act pushes his conversion from the political act that Vladimir had planned (a prerequisite for marrying the Byzantine emperor’s sister) to something much more meaningful.  As the Grand Prince recounts his sins, though, he also merges his soul with that of his people, confessing not only to things he personally committed (the rape of his wife) but also to things committed by his subjects (the murder of his brother, the sacrifice of a Christian soldier).  An idealized model of religious autocracy is thus offered up, in which the state and its leader are one and absolution is offered for any crimes deemed necessary for their preservation.  The only alternative to this order that the film allows for is the decidedly grim image it offers of Rus’’s native paganism: demonic priests presiding over monstrous idols that hunger for human blood.

Like the best Hollywood cinema, however, the politics of Viking are slippery. While the film demands an allegorical reading, it dismisses such a reading at the same time; the contemporary resonance of the capture of Korsun’, for example, can easily be countered by pointing to the historical record—Vladimir really did capture the city.  But when the filmmakers were held accountable to the historical record by historians, they insisted that “we made the film for ordinary people, not for historians.” 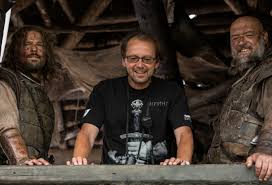 Andrei Kravchuk graduated from the Saint Petersburg University of Cinema and Television, where he studied in the workshop of Semen Aranovich.  After graduating he worked as a director of short films, documentaries, and television serials. He received significant attention for his 2006 film, The Italian, which was Russia’s submission for the Academy Award for best foreign language film.