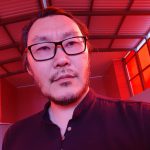 Kostas Marsaan is a native Sakha film director. He studied history and political science at Yakutsk State University, and theater direction at the Moscow workshop of Alla Surikova and Vladimir Fokin. Since 2010, he has worked as a director, film editor, screenwriter at Art Doydu Production Company, for which he directed his debut, the mystery thriller My Killer. In 2016, the film entered the long list of the Golden Globe Awards and soon became the first Sakha film distributed across the whole Russia. Kostas’s second project Ich-chi, an entry in our program, is the first Sakha independent film which got international theatrical distribution.