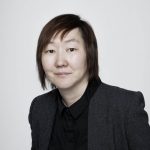 Marianna Siegen is a native Sakha female film producer. She started her career as an organizer of various public events—from national festivals and political campaigns to theatrical musicals. In 2010, she produced her first film (Leaving Hong-Kong) and a year after, founded Art Doydu Production Company. As a CEO of the company, Marianna has leaded projects that brought her more than 20 awards at international and Russian film festivals. Currently she is collaborating with one of the young female directors to produce a historical fantasy film set in medieval Yakutia.