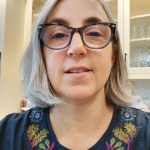 Michele Leigh is an independent scholar who writes about gender in film and television, as well as Russian cinema and animation. A 2016-2017 Fulbright Scholar in Russia, Leigh conducted research for a manuscript on female industrial labor in the film industry prior to 1917. She has published articles on historiography, early Russian cinema, and films of the Thaw. Along with Lora Mjolsness, she wrote She Animates: Soviet Female Subjectivity in Soviet and Russian Animation which was published by Academic Studies Press in the Fall of 2020.