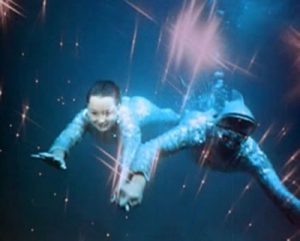 Part science fiction, part fantasy, and part romance, Amphibian Man, based on the 1928 Aleksandr Beliaev novel of the same name, is the story of Ikhtiandr’s (Vladimir Korenev) search for love and acceptance on land. In an exotic and beautiful unspecified Latin American locale, (Buenos Aires, Argentina in the novel) townspeople live in fear of an exotic creature, “the sea devil.” In reality, this “sea devil” is the kindly Ikhthiandr, whose father, Dr. Sal'vator (Nikolai Simonov) replaced his lungs with shark’s gills in a lifesaving operation in his childhood. Although Dr. Sal'vator dreams of a utopian underwater republic where his son can thrive, Ikhthiandr has his sights set on a different prize: the beautiful Guttiere (Anastasiia Vertinskaia), whom he rescued from a shark attack when she fled from an unwanted suitor. Feeling stifled by loneliness and the solitary existence of life under the sea, Ikhthiandr sets out to find her, against his father’s wishes. Along the way, he encounters not only her greedy and jealous fiancé, Pedro Zurita (Mikhail Kozakov), but also the cruel realities of the world outside of his sheltered underwater existence.

In many ways, the now fifty-year-old film has not aged well, but it has done so in a way that is generally considered “so bad, it’s good.” Amphibian Man, with its cheesy 1960s visual aesthetics and relatively low budget, given costly technical aspects, has become a cult classic. It has an overdramatic and oversimplified love story. Guttiere is predictably the object of affection of not only Ikhthiandr and Pedro, but also Ol'sen (Vladlen Davydov), a journalist and friend of Dr. Sal'vator. Ikhthiandr wins her heart by immediately confessing his love for her and, when she teases him about love at first sight, he earnestly replies with “Is there any other kind?” This charming, but utopian love, combined with impossibly ridiculous feats of technology and the tragic ending of the loveable and naive Ikhthiandr who wanted nothing more than to be a part of the world on land, seem to form the perfect mixture of terrible and brilliant.

Just as the topic of this year’s Russian Film Symposium, “camp”, can be approached from several different angles, so can Amphibian Man’s relationship to this aesthetic. The term “camp” comes from the French se camper, “to flaunt,” and Amphibian Man does just that. With bright colors, catchy music that remained popular for years after the film’s release, foreign dancing, flashy neon signs in the city, men’s short shorts and tight, sparkly, underwater costumes, the film entices the viewer to enter this strange and exotic world. The film’s most unique gimmick, however, is that it was the first Russian feature film shot underwater, a technique that was discussed at length in articles leading up to the release of the film. The underwater choreography, particularly the fantasized duet between Ikhthiandr and Guttiere, is the highlight of some of the most captivating scenes in the film. 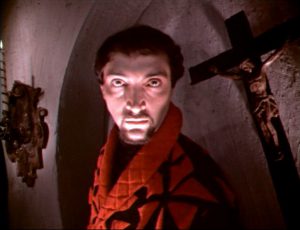 Despite having the “proper” ideological message required of a Soviet film at the time, Amphibian Man is still out of sync with many of the time period’s social norms. The protagonist, Ikhthiandr, who wins the heart of Guttiere, performs an identity that differs from the ideal Soviet man not only in that he is part-shark, but also in that he is effeminate and gentle, standing in stark contrast to Guttiere’s aggressive, rejected-fiancé-turned-husband, who, ironically, is unable to consummate their marriage as Guttiere locks herself in her room following the wedding. Indeed the film itself was out of touch with Soviet cinematic reality and was not well-received by Soviet authorities, who saw it as too foreign, beautiful, and entertaining. Soviet audiences, however, loved the film. In 1962 it was seen by over 65 million viewers and broke box office records. It was also recognized on the world scene, winning the Silver Sail at the first International Science Fiction Film Festival in Trieste, Italy. 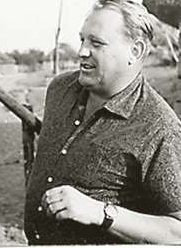 Vladimir Chebotarev studied in the Rostov Military Academy (1939-1941) and fought in the Great Patriotic War. He studied directing with Mikhail Romm at the All-Russian State Institute of Filmmaking (VGIK), graduating in 1952. From 1952-1956 he worked making educational films at the Lenfil'm studio, before becoming a director for Mosfil'm in 1961. From 1972-1976 he worked there as a director of dubbing. Chebotarev died 4 March 2010. 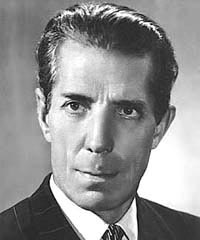 Gennadii Kazanskii graduated from the film department of the Leningrad Institute of Art History in 1930. He worked first as an assistant director, then as a director at Lenfil'm from 1931-1941. He spent part of the war as a director at the Central United Studios in Alma-Ata, before returning to Lenfil'm, where he worked for the rest of his directing career. Kazanskii died 14 September 1983.