Sarik Andreasian’s An Office Romance: Our Time is a remake of El'dar R'iazanov’s Soviet-era film Office Romance (1977), which was based on a play, Co-Workers (Sosluzhivtsy), written by Emil Braginskii in co-authorship with R'iazanov. The film was the second most viewed film in the Soviet Union in 1978 (58.4 million spectators). It is a story of the relationship between Anatolii Novosel’tsev (Vladimir Zelenskii), a clerk in a state-run Institute for Statistics, who is a divorced farther with two children, and Liudmila Kalugina (Svetlana Khodchenkova), the director of the Institute, an authoritative, single woman devoted to her work. The intrigue starts when the newly appointed assistant director of the Institute Iurii Samokhvalov (Marat Basharov), a careerist and old friend of Novosel’tsev’s, tries to “help” him get a promotion and advises him to flirt lightly with Kalugina. As a result of this “affair” Kalugina and Novosel’tsev fall in love and get married.

The remake follows the basic idea of the original. The new screenplay, written by a group of writers including the director, keeps almost all of the characters and some of the dialogues from the original film. However, the ideas, characters, and dialogues recreated in a new context by a director who is half R'iazanov’s age when he directed the original film, produce quite a different story. The modern-day Kalugina becomes the director of the country’s biggest credit rating agency; Novosel’tsev a financial analyst in the agency; and Samokhvalov is transformed into a spy sent by a competing firm to undermine Kalugina’s plans to have her agency become part of a big international corporation. The Kalugina-Novosel’tsev romance starts at a Turkish resort, and after Samokhvalov's sabotage attempt fails, the film ends with Kalugina’ agreeing in public to marry Novosel’tsev.
The opening of the film presents an immediate difference from the 1977 version by adverting to contemporary media culture. A typed subtitle alludes to a computer screen; “click” gives access to Moscow, the place where events are happening, but this city is quite different from 1977. We do not see a Moscow crowded with people and morning traffic, characters making their way through the unceasing movement of overcrowded buses, suburban trains, or personal cars; instead there are bright digital panoramas of an empty and sterile city, which plays as the background for the movement of the two main characters.
Both films start with presentations of the characters. In the 1977 version, the introductory voice-over belongs to Novosel’tsev, who introduces himself, Kalugina, and the other characters in the film. In OurTime, both Kalugina and Novosel’tsev present themselves: Kalugina reflects on professionalism, while Novosel’tsev focuses more on his private life. Novosel’tsev’s centered role in the introductory narrative of the original film positions him as the voice of the collective, a representative of collective shared knowledge, stressing the dissolved boundaries between private and public life in Soviet culture. By depriving Novosel’tsev of this role, Our Time erases the specificity of communal life in the institute in the Soviet context; instead we encounter separation and fragmentation. Communal life is replaced by team work, which the new Kalugina stresses over and over.

Yet the disintegration of the collective continues in the office space, which we see first through surveillance camera monitors. Social life, mediated by screens, continues in the next shot of a social network, “My World,” open on the monitors of agency employees. Office space―like city space―is not a pulsating, living entity but rather a site of mediated social interaction, which strengthens the fragmentation of space. It is not by chance that a systems administrator replaces Shurochka, the active trade union representative in the 1977 version.

Moscow now shares significance with a Turkish resort, which is edited directly from postcard views of Turkey, and this digital city is, in turn, replaced with postcards vacation imagery: sea, swimming pools, sunburnt female bodies, sunsets, and a fashionable hotel. This ensemble becomes a contemporary alternative to the private apartments where the Kalugina-Novosel’tsev romance develops in 1977.

In fact, the Kalugina-Novosel’tsev romance becomes more of a resort than office romance in 2011. The Turkish vacation―with a background of sexualized female bodies―also presents more sexually liberated behavior by the female characters: both Kalugina and Olga Ryzhova (in 1977, a married middle-aged woman, who recites Bella Akhmadulina’s poetry and tries to recreate a romantic relationship with her former lover, Samokhvalov; in 2011, a single, sexually liberated woman around 30 in a search of a husband) initiate their sexual relationships with Novosel’tsev and Samokhvalov respectively. In this new context, the old phrases at times sound out context, deprived of the important intonations of the touching relationship between Novosel’tsev and Kalugina, and fail to go deeper.

Screens also function as mediators of contemporary romance: Kalugina’s agreement to marry Novosel’tsev is mediated by a screen; a twist in the plot, which temporarily disrupts the budding relationship between Kalugina and Novoseltsev, is also mediated by technology: a provocative video with “Kalugina” faking a love affair with Samokhvalov is shot by a surveillance camera.

An Office Romance: Our Time produces a polished surface that is deprived of depth, in the sense that mise-en-scène appears to be more significant than the underlying story and the development of the romantic relationship. It offers spectators many recognizable signs of contemporary mediated culture, on the one hand, and many visual clichés of contemporary Russian middle-class life (the repetitive use of expensive foreign cars, fashionable hotels, a resort weekend, etc.), on the other.
An Office Romance: Our Time is obviously not oriented at admirers of the original version; instead it is aimed at a younger generation of spectators who can receive it as part of a chain of contemporary romantic comedies, recognize familiar Russian actors and actresses, appreciate references to popular cinema (for instance, the reproduction of a Luna-park scene from Til Schweiger’s Barefoot), feel comfortable with consistent product placement, as well as with mediated social interaction and digital imagery of space and relationships. 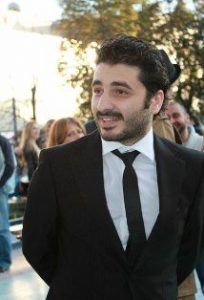 Sarik Andreasianis a director, screenwriter, producer, and actor. Born In Yerevan (Armenia), he moved to Moscow, where he graduated from Studio Iurii Grymov and worked in advertising and the music industry. Since his filmmaking debut in 2009 he has directed, written screenplays, and produced films. In 2010 he co-founded the film company “Enjoy Movies.”