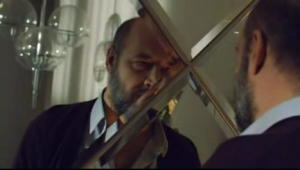 Dealing with classics always requires a delicate balancing act by a director, as it is one of the easiest and, at the same time, most challenging ways to draw attention and criticism. This is especially true if the title is “Boris Godunov,” since the film cannot avoid comparisons to previous texts―Pushkin’s drama and Musorgskii’s opera―both staged hundreds of times―and Sergei Bondarchuk’s film (1986), which became a Soviet classic.

Mirzoev’s film, however, draws a clear distinction amongst these texts and traditions. He has brought the tragedy into a contemporary setting while retaining the original script. The film begins with scenes of modern details: political figures in business suits, Shuiskii talking in a Mercedes, Pushkin making an announcement on TV, and committee members meeting against the backdrop of glittering skyscrapers. Sometimes, though, the contemporary setting evokes anachronistic awkwardness, for example, an illiterate soldier reading text messages on an iphone. While such scenes produce discordant effects between the lines of the past and the modern setting, they also offer a new texture to the traditional text.

Indeed, this device in adapting classics began decades ago and the use of a contemporary setting has already become a cliché marker of the postmodern. What more can be done with classics that the audience knows by heart?

Yet Boris Godunov can be viewed from a different perspective. Pushkin’s original play has been staged mostly in traditional costumes and in its historical setting. Mirzoev’s film successfully manages a delicate balancing act, fully negotiating the boundary between past and present, making a significant impact on the history of adaptation―not only of Boris Godunov but of classics as a whole. It diverges completely from the adaptation style of Soviet films and recent television serials in Russia that reproduce the epic past with luxurious historical props or a sequence of plot clichés with elaborate or shocking stylization.

Many critics have interpreted the modern setting of Boris Godunov as a political satire, drawing parallels between the film and the current political situation in Russia. Dealing with plots of dictatorship and political intrigues, the film can be easily pigeon-holed as a parody. The director, however, strongly rejects any interpretation of his work as a satire or allegory. Moreover, Pushkin’s original text had no intention to be a satire.

In the film, all political events are described as a show, as mere entertainment. The Kremlin becomes one big theater and political figures become actors. This role of the Kremlin is vividly represented when the director literally inserts a theatrical scene of the false Dmitrii mourning his horse. The false Dmitrii becomes an actor on stage, reciting lines, while Godunov watches. In the next scene, when Godunov has fallen ill, he appears to be backstage, while the false Dmitrii watches him from the auditorium. This tactical scene allows the contrasting props of a horse and a tank to coexist logically, with the original lines left untouched. The change of positions identifies both heroes as usurpers who are only playing the roles of tsar or tsarevich. 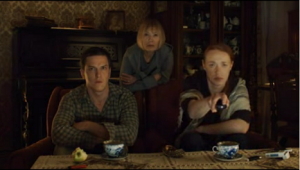 The constant appearance of puppet-petrushki further emphasizes the theatricality. When Godunov finishes delivering his lines from his sickbed, the puppet claps its hands. The reversal of actor and spectator enhances Boris Godunov’s role as an actor in political theater..

This is also evident in scenes of ordinary people. Instead of a crowd in a square, two families, representing working class and intellectual families respectively, watch political intrigues unfold at home in front of the TV. They enjoy the political conflicts between Godunov and the false Dmitrii just like any other entertainment. They respond to each TV report sympathetically. But in spite of their intellectual and class differences, their responses are not distinguishable: both families are indifferent to what is going on beyond the media, so there is nothing to do except turn off the TV when the show is over. Moreover, the colorless war scenes reinforce this notion; they isolate the people from political events. Black-and-white documentary frames signify that every brutal event lies beyond the screen and far from the present. In this sense, the film points to an unbridgeable rupture between political events and ordinary life.

If the audience is more sympathetic to Godunov’s suffering in spite of the parallels drawn between him and the false Dmitrii, this should be attributed to Sukhanov’s performance, as well as the original text. In his extremely long monologues, he brilliantly realizes a combination of despotic strength, vulnerability, and pathos.

The cinematography in the two monologues, in which images of the real Dmitrii appear, depicts Godunov’s psychological states to the extreme. The first monologue takes place right after Godunov is informed of the appearance of the false Dmitrii. The camera focuses more on reflections than the actor’s face. A projector screen and a mirror come to the fore; the screen which had been showing one of his daughter’s home videos, suddenly projects an image of the real Dmitrii, the dead child. A multi-paned mirror reveals multiple and broken images of Godunov’s face and the breakdown of his psychological state.

More bizarre is the second monologue, which extends from Godunov’s sickbed to a weird underground place―the same place where the false Dmitrii saw his dead body in a dream. Godunov becomes very active in this scene, chasing a phantom of Dmitrii, which clearly reflects the toll of his inner sufferings to the point of full paranoid delusions. During the monologue, his son, Fedor, watches him with sympathy and tenderness as a spectator of his madness, transmitting his emotions to the audience.

This focus on psychological states within the film reduces the importance of historical details and political contexts. The film is faithful to the original, the great classic of Russia’s Shakespeare, reviving the drama of Pushkin on the screen. But the film also attracts many in the audience with its fanciful stylization and meticulous details: the check-up scene of an acupuncture treatment; the gothic, stylish make-up of ladies and the chase scenes in a bar; a male dancer in exotic costume in a masquerade; and the false Dmitri with Marina in a luxurious swimming pool. These are elements with a touch of camp. The director successfully juxtaposes the ahistorical, eternal text of the past with striking stylizations and a sensibility of the present. In this fashion, the film avoids becoming a mere camp repetition of the classic. 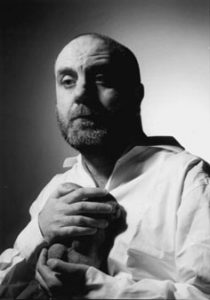 Vladimir Mirzoev is a, writer, and theater and film director. He graduated GITIS (currently RATI), and began his theatrical career in Toronto, Canada. After coming back to Russia he staged dozens of theater performances in Moscow. He made his debut as a film director with Love Sign (2006).