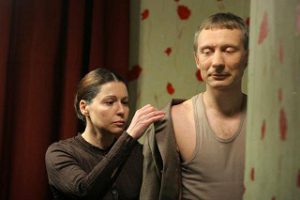 Middle-aged Ekaterina Artemovna (played by Natal'ia Negoda, her first film on Russian soil since Little Vera) is a morose single librarian in a small provincial town. Her greatest excitement comes in demanding payment for the crude drawings with which school children vandalize her precious books. Her speech, dress, and disposition stink of Soviet bureaucracy, but within the context of the film—the Russian Federation in 1998, right after the financial collapse—she has become obsolete: no one needs her. All is not what it seems though. Ekaterina Artemovna is not the impeccably honest citizen she is first made out to be: she disguises herself in a winter hat and casual clothing to sell books that she has filched from her own library.

All of this changes, though, when her prince charming, a nameless man (Dmitrii Kulichkov), arrives from Moscow to deliver her from her miserable existence. He even comes dressed in armor, the uniform of a Navy sailor, which seems out of place in a mining town. A chance meeting between them occurs when he comes to the library to return one of the stolen books. He does not recognize Ekaterina as the culprit. The sailor’s persistence in asking her out on a date to the only restaurant in town, “Fairytale,” and Ekaterina Artemovna’s initial resistance, but eventual acceptance, establish the genre of the film.

In retrospect, the film may be comfortably characterized as a melodrama. It revolves around a “woman’s story,” a possibility of love and marriage, and a focus on domestic spaces such as the library and the communal apartment. Thomas Elsaesser in “Tales of Sound and Fury” asserts that “[o]ne of the characteristic features of melodramas … is the way they manage to present all of the characters convincingly as victims” (374). This definition correlates closely to the characterizations in the film. Ekaterina is a victim—“real love” seems to come at last, but it is dashed by the revelation of her petty illegal activities. She is betrayed by her young colleague and friend, who seduces the sailor after he rejects Ekaterina. The nameless sailor is also a victim. The possibility of a new life and escape from a dark past come to an end when he finds out that the person he is in love with is a thief—the worst type of person in his eyes. He cannot even make it back to Moscow. Police officers stop him on the train to check his documents. Knowing that he is hiding his criminal identity, he attempts to run away, but is chased down and arrested. Even the people who have brought about the break-up between Ekaterina and the sailor are portrayed in a sympathetic light: Ekaterina’s young friend has given up the possibility of a quiet life with her boyfriend Slava, ruined her friendship with Ekaterina, and will have to move on without the sailor. The dentist Igor', portrayed as a humble, yet persistent suitor, who truly cares for Ekaterina, will never have his love requited. He believes that by revealing Ekaterina’s identity to the sailor and muscling this man out of town, he will win Ekaterina over. However, he will have to live with the guilt of having driven Ekaterina to suicide. Even Ignat is a victim—as his wife and neighbors denigrate his sister after her death, he defends her and comes to the realization that he had failed to recognize her positive qualities during her lifetime. 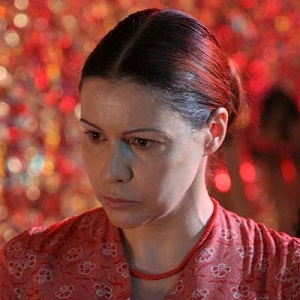 Despite the abundance of melodramatic elements, the film does not initially proclaim its adherence to this genre. As the film opens in the library, the time period is unclear—is it Soviet, post-Soviet 1990s, or contemporary? The love interest between Ekaterina and the sailor only develops after twenty minutes have passed. Most significantly, though, the absence of non-diegetic music throughout the entire film makes it difficult to ascertain what emotions we as viewers are supposed to feel.

In the place of music, the striking visuals of the film function as a marker for emotional affect. The repetition of vibrant images and set phrases add a lyricism to the film that allows for the excess that characterizes melodrama. Most apparent is the image of blood that acts as a leitmotif for Ekaterina. It first appears when she scrapes her knee jumping off the train. We see it again when, after her fight with the sailor, she clutches a shard of broken mirror until blood streams down her hand. From this wound she smears blood on the young police officer who told Igor' of her illegal activities, making the squeamish young man faint. The blood that flows from her clutched palm and depicts her slow suicide are the final images associated with Ekaterina.

In addition to this actual blood, the color red and the word “blood” are linked to Ekaterina. The film begins with the title outlined in deep red. The library in which Ekaterina works is a vibrant crimson. The lighting in the restaurant that turns out to be a strip club is a seedy scarlet. The roses on the wallpaper and the curtains in her apartment are a blood red that jumps out at the viewer. After Ekaterina’s suicide, Ignat’s neighbors and wife speak harshly of her, but he replies: “Katia is my [flesh and] blood” (Katia krov' moia).

There is a bright reflective vivaciousness not only to the walls of the library and Ekaterina’s apartment, but also to the interiors of the communal apartment, Igor'’s flat, and Ignat’s stairwell. Despite the tough economic times in a post-Soviet, post-financial crisis mining town, everything seems to have been painted that day. The walls themselves almost pulsate or even bleed. Furthermore, there are several phrases and speeches repeated throughout the film—“clenched heart,” “shit everywhere,” “everyone/everything is the same,” the recitation of the Rudyard Kipling poem, and Ekaterina’s reworking of Nikolai’s initial diatribe that one must be strong to endure. The reoccurrence of objects, phrases, speeches, settings, and similar visual textures all combine to create a slow rhythm that, like a buben (tambourine) or a baraban (drum), softly beat like a heart. The effect is an innovation on the melodramatic genre: music has been replaced by a more subtle expression of emotional excess. 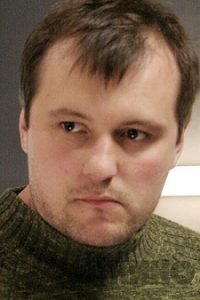 Aleksei Mizgirev was born in Myski, Kemerovo region, in 1974. In 1998 he graduated from Tomsk State University with a degree in philosophy, and in 2004 he received a degree from the State Institute of Filmmaking (VGIK). During his time at VGIK, he worked in the workshop of Vadim Abrashitov and served as Assistant Director to Abrashitov’s film Magnetic Storms. In 2007, Mizgirev directed his first feature-length film, Hard-Hearted. Buben, Baraban is Mizgirev's second feature-length film.