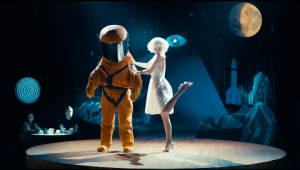 Sergei Loban’s Chapiteau-Show effectively proves the common wisdom that vacations exist to make one relieved to return home: no person can stand that much sustained time with anyone, even loved ones, in close quarters, with no privacy or any of the props through which we maintain our everyday identities.  Loban’s film examines a Crimean resort town’s debilitating effect on basic human relationships in four intersecting episodes, each about a different kind of love between people.
The chronologies of the four episodes overlap, taking as their starting points various times, but each ending at the mysterious black tent of the Chapiteau-Show, which burns to the ground four times, each time as a different act plays out on stage.  Following episodes make visible what had previously been invisible, or add the invisible motivation to what had merely been a visible surface at an earlier time.  As this narrative of hermeneutics unfolds in the film as a whole, the episodes “Love” and “Friendship,” for their part, work to lay bare many of the complications that internet technology and the contemporary tolerance for and embrace of subcultures have introduced into modern Russian life.  Indeed, in view of the strongly Masonic imagery of the Chapiteau-Show itself, these episodes evoke Enlightenment Masonry’s contemporary phenomenon, the Kunstkammer, here an encyclopedia of the relational deformities of modernity.

The shadow of the internet looms long over the sunny public beach of Simeiz in “Love.” Vera (Vera Strokova) and Cyberstranger (Aleksei Podol'skii) push the boundaries of their relationship, previously developed exclusively over the internet, by taking a trip together to Crimea.  The opening scenes leading up to their first encounter in the flesh immediately produce a contrast of surface and depth, when Vera clearly takes a drawn picture of a monster that Cyberstranger sends in lieu of a photograph for a signal about his surface appearance, rather than his inner being symbolically represented on the screen.  This dyad of surface and depth seems strangely constructed, almost abusively held in place by force of Cyberstranger’s will that Vera be a superficial product of her surroundings while he remains anchored to an identity.  Yet to propose that the purpose of the episode is the postmodern flattening of those distinctions is to propose violence to what, in the end, seems to be a humanistic endeavor.  To this end, when surreal song-and-dance numbers, characterized by a driving drum machine and flat intonation, periodically interrupt the flow of events, they perhaps restore a sentimental depth of feeling against the cynical readings that Cyberstranger’s and Vera’s behaviors prompt. 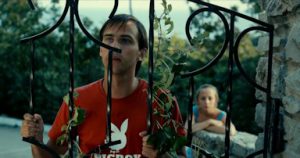 “Friendship” concerns a deaf young man, Lesha (Aleksei Znamenskii), who appears to have dedicated significant energy to making his way into, as well as through, hearing society.  By contrast to his deaf friends, he goes out of his way to make the hearing comfortable by lip-reading, speaking out loud, and even singing for Moscow audiences, masking his difference to the greatest extent possible.  He falls in with a group of young theater workers, led by Senia (Dmitrii Bogdan), who are play-acting at “Pioneer”; this group’s own theatricality at first serves to naturalize Lesha’s slightly different mannerisms.  The “Samantha Smith” troop flouts the process of socialization into a monolithic, state-defined public sphere, originally signaled by their red scarves; rather they decompose the singular into every form of alterity, including homosexuality, swinging youth culture, drug-induced states of altered consciousness, and, it seems, deafness.  Lesha’s discomfort with such alterity is ambiguous; beyond the sense of homophobia, he also appears uncomfortable existing in this collective as if in a superficial menagerie of human conditions.  This ambivalence, it seems, is the only difference the collective will not tolerate, and he is expelled.  Lesha’s eventual choice to return to his deaf friends, undergoing a period of humiliation for having snubbed them before re-entering the group, comes across as atavistic tribalism, which is underscored in the final scene as the Chapiteau-Show tent burns down around its participants once again.

The natural beauty and power of the ocean and mountains of Simeiz create a sort of repository-matrix for reorganizing the human material that pours onto the beach from Moscow, in a way that both asserts order and revels in disorder.  One the one hand, the color-coded elements of Vera’s blue dress, Lesha’s red shirt, and Cyberstranger’s black ensemble, in addition to serving as symbols in the film’s allegorical scheme, serve as vivid reminders of the positions of characters in space, even as time is rewoven and the perspective of the camera changes.  On the other, in the gyre of Crimea, all manner of cultural detritus become distorted and attach themselves to available surfaces, most notably the characters themselves, in their elaborately cheesy t-shirts.

Most visually striking of all, of course, is the eponymous Chapiteau-Show, where time becomes particularly convoluted as long-dead cultural icons return to the screen.  The spiral motif and the repeated ends in conflagration reflect the impression that time does not move forward.  The performances of Marilyn Monroe and Michael Jackson look-a-likes, along with the Russo-Soviet resonances of a cosmonaut bear, matador, or rampaging moidodyr, confirm this.  The icons refract, as the look-alikes divide, mime, and perform under the alien voices of rather ghoulish singers in the wings.  In the most postmodern gesture of the film, time is flattened and merely affords the potential to dissect and reorganize cultural elements in new configurations.  They are given depth, however, by the way they speak to the events outside of the tent.  All of these allegorical figurations of relational identity are definitively dispersed by the recurring fire.  Their potential reassembly beyond this point is left to the imagination, if an imagination still guided by the earworms of the final dance-meditation on love or the absolutely non-diegetic “Oh Baby Baby” number that either sends us off once more into the wide world or, alternatively, directs us right back into the vortex of the next episodes, “Honor” and “Cooperation.” 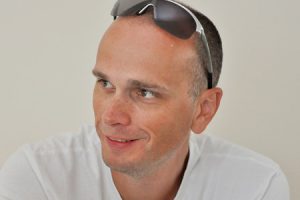 Sergei Loban’s artistic career originates in his work in the1990s: as proprietor of an underground club and center of informal art in Moscow, and then as director of the youth-oriented television show Up To 16 and Over.  In the 2000s, he founded the creative association Svoi2000 together with Marina Potapova and Dmitrii Model'.  His film debut was with the 2001 short Incident with a Bro, commissioned for a screenplay by a leader of the Belorussian underground art scene, Lesha Chikanos.  Loban has enjoyed critical success with his films, receiving the Russian critics’ prize at MIFF for Dust in 2005 and the special jury prize at the MIFF for Chapiteau-Show in 2011.