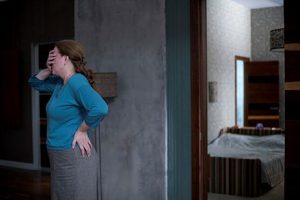 The film begins on an ordinary morning in the large apartment inhabited by Elena (Nadezhda Markina) and her husband Vladimir (Andrei Smirnov).  The apartment, located in the center of Moscow, is large and expensively furnished, but sterile and cold, a locus that perfectly characterizes the relationship between husband and wife.  They sleep in separate beds and talk only when necessary to serve the needs of communication.  Each has been married before and has a child from the previous relationship, and each is fiercely devoted to the child.  Although they live in peace and comfort, the new marriage is one of convenience for both partners and is satisfactory as long as both continue to reap the practical benefits.

Their two children embody two very different trajectories for contemporary Russia. Vladimir’s daughter (Elena Liadova) has adopted to an exaggerated degree the cynicism emblematic of the spiritual vacuum left by the collapse of both the Soviet regime and the promise of Western-style economic prosperity.  Elena’s son Sergei (Aleksei Rozin) provides an even more unambiguous link to the past.  He lives with his wife and two children on the outskirts of Moscow in an apartment that recalls the claustrophobic spaces that characterized the gritty realism of much 1990s post-Soviet cinema.  To travel to Sergei’s apartment, as Elena regularly does, is to travel not only through space and down the economic ladder, but also, in a sense, to move back through time.

The film’s plot is set into motion by Elena’s attempts to elicit Vladimir’s financial support to help Sergei’s older son gain university admission and avoid military conscription.  The plot comes to its crisis point when Sergei suffers a heart attack and, in the immediate aftermath, reconciles with his estranged daughter.  When he informs Elena that he plans to leave his material wealth to his daughter and sets about writing a will, she contemplates a desperate act in order to forestall the loss of everything that she had tried to insure for herself and her family.

The film thus presents us with an overheated pressure cooker of family relationships and conflicts, which situates this film comfortably in the context of the director’s earlier films.  But whereas The Return (2003) and The Banishment (2007) raised the family drama to a mythical plane of religious or cultural archetypes, Elena embeds the family drama in a specific and very concrete social context.  Elena is not only torn between her husband and her son, but moves physically between the two, traversing not only the physical space of Moscow and the socioeconomic stratification of present-day Russia, but also the historical legacy of the Soviet past, materially still very present, and the chaotic post-Soviet years, which formed the deep cleavages that rend Russia’s population today. 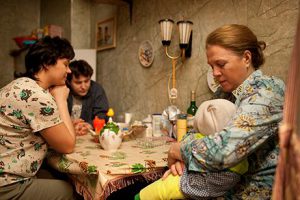 Elena is not only the one person in the film who crisscrosses the social divides, but she actively attempts to mend the rifts, not only trying to elicit Vladimir’s sympathy for the stepson that he despises, but going so far as arranging the reconciliation between father and daughter and, perhaps in so doing, bringing about her own potential ruin.  She serves as the nexus for a very complex web of significations that has engendered a large number of critical interpretations.  While one line of interpretation, particularly favored by Western reviewers, understands the film as a merciless and penetrating exposé of the social contradictions of Russian society in the age of Putin, Russian film critics often downplay or dismiss the social critique, arguing instead that the film’s meaning is to be found in the power of maternal love and fidelity, which transcends all social and economic pressures.

Zviagintsev’s film is a tightly structured work rich in social signifiers both abstract and concrete.  Both the family drama and the social critique hold our attention while simultaneously being inflected by another overworked problematic of the Russian cultural tradition: the question of crime and punishment.  Elena’s desperate act and the consequences that follow from it are conditioned by and refract our view of the tensions engendered by blood ties and class affiliations.  This complex structure provokes its viewers to seek a moral message from the director, but the film poses many more questions than answers.  While Sergei and his family are portrayed as social parasites feeding on the industry of others, we know nothing of how Vladimir achieved his material wealth and thus his moral authority to condemn Elena’s family is doubtful.  Moreover, Elena’s occasional retreat to Christian teaching and tradition for emotional support is cast in an ironic light.  She is embarrassed by her ignorance of Church ritual when she tries to pray for Vladimir’s recovery from his heart attack.  More devastating, her quoting of the New Testament (“And the last shall be first and the first last”) is spoken in a barely suppressed rage that, in the context of an argument with the tight-fisted Vladimir, sounds more Bolshevik than Christian.

Although Zviagintsev’s third feature is much more earth-bound than his previous two films, he continues even here to work as a self-conscious cinematic auteur with a barely hidden disdain for the expectations of critics and spectators alike.  The film is rich in false leads and ambiguity that both highlight and complicate an elusive authorial message.  In an understated but consistent way, Zviagintsev integrates into the film modern forms of media—particularly television and computer games, both of which exercise an almost mesmerizing power over their viewers and users that threatens to turn them into media addicts.  The role of media and the spatial reconfiguration of the family at the end of the film both suggest that the filmmaker does not consider the eternal question of crime and punishment to be transcendent or unchanging, but always potentially inflected by the specifics of historical and social change.  Finally, the musical score, taken from the third movement of Philip Glass’s Third Symphony, ratchets up the tension of the film, leading the viewer to expect some impending event, an expectation that is usually, but not always, nothing more than a lure.

Elena originated as a constituent part of a four-part international cinematic work in English on the theme of the apocalypse.  Zviagintsev continued to develop the idea as a stand-alone feature film after the failure of the original project, which nonetheless leaves some faint echoes at key points in the film.  Elena has won several awards since its release, most notably the Special Jury Prize in the Un Certain Regard section at the Cannes Film Festival in 2011, and in the “White Elephant” awards of the Russian Guild of Film Critics and Scholars, where it won in the categories of Best Film, Best Director, and Best Supporting Actress (Liadova). 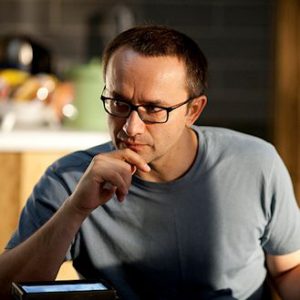 Andrei Zviagintsev graduated from the acting department of the Novosibirsk Theatre Institute in 1984 and from the acting department of GITIS (Moscow) in 1990.  In addition to acting on stage and prior to his work as a director of feature films, he worked in various television projects as actor, director, and producer.  Since his filmmaking debut in 2003, his extraordinary success at international film festivals and competitions has quickly catapulted him into the ranks of Russia’s foremost film directors.