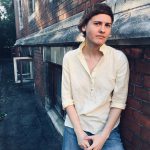 Tat'iana Stefanenko was born in Novosibirsk in 1982 and trained as a philologist. She then worked as a librarian, correspondent, and editor. She pursued her passion for documentaries while studying at the School of Documentary Films of Marina Razbezhkina and Mikhail Ugarov. Her works were shown in Russian and international festivals (e.g., Moscow International Documentary Film Festival DOKer and Les Saisons Russes de Lyon).

Daria Shembel —The documentary made by Marina Razbezhkina’s graduate, Tatiana Stefanenko, is about the Time Service Department of MSU Sternberg Astronomical Institute (GAISh). In the USSR, GAISh served as an important center for astronomical research and time control. With the advent of highly accurate atomic clocks, GAISh equipment, which had never been updated since its installation, became obsolete and incompatible with accepted standards of time management. At the same time, GAISh scientists continue coming to work every day and adjust the clocks mechanically using timekeeping practices developed in the 1920s.

Guided by Stefanenko, we enter the uncanny world that relinquishes any signs of a modern research facility. Transported back to a Soviet Scientific Research Institute (NII) circa the 1970s, we see spacious rooms, worn rugs on patterned parquet floors, windowsills with potted plants, and equipment that looks as if it was picked up at an antique store: consoles with analog switches and dials, bulging CRT computer displays, outdated oscilloscopes. Soviet NII’s work ethic reigns here as well: employees enjoy extended tea breaks and attend weekly classical music concerts performed specifically for the Institute's employees.

Like many of Razbezhkina’s graduates who are excellent at discovering a fabula in everyday routine, Stefanenko happened to film in the Institute during a minor occupational crisis. One of the Institute’s clocks lagged 20 seconds behind “Moscow time” (in comparison, atomic clocks are accurate to one second over 138 million years). While a senior researcher suggests—time being of the essence— that it will be possible to synchronize the clock within the next 2-3 days, his younger colleague politely insists that he prefers to have at least one week to do things properly. “Are you in any hurry?”—he inquires philosophically.

Stefanenko has fully mastered Razbezhkina's famous “zone of the snake” method, which assumes the empathetic and participatory observation of the subject. For a few days, Stefanenko closely followed the scientist preoccupied with the clock synchronization and explored the Institute’s daily operations. As he works to set things right, we find him carefully turning several knobs on an array of an antiquated apparatus, gently shaking one piece of equipment, and having relaxed discussions with senior colleagues.

The film is a charming portrait of the Institute’s scientists, who are indeed timekeepers, but clearly of a bygone era. As in many Russian research institutes, average employee age can be well over 70. Cognizant of their antiquated facilities and of the entirely pointless work they have been performing, the scientists proudly showcase the relics of the previous regime and convey a good dose of self-irony: “This is a museum, in which we are the most salient exhibits.” One of the film’s last shots is of the scientist checking on the rectification of the 20-second lapse. Thoughtfully he adjusts the clock in the hallway and proudly announces that the problem has been solved. The exact time in Moscow is successfully established—time to go and listen to some Chopin.

The film provides an irony-rich nostalgic portal into a vanishing world of singular charm. Being part of an isolated community focused on science, these Moscow timekeepers exist in a peaceful timelessness, whereas Russia, rapidly disappearing from all radars, keeps pushing the clock hands forward into a past without charm.