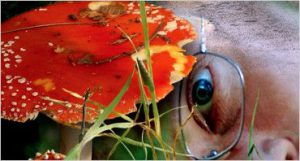 Generation P, Viktor Ginzburg’s first feature film is an adaptation of the novel of the same title by Viktor Pelevin.  This seminal novel of the late 1990s was considered “impossible to film,” and this perceived difficulty added prestige to Ginzburg’s project.

The film combines a dark satire of Russian life in the late 1990s with a dystopian view of Russia’s reentry into the globalized, late capitalist order.  With minor variations, the film closely follows the novel’s plot and gives direct or condensed quotations from Pelevin’s text in the voice-over.  This closeness to the original can be seen as either the film’s strength or its weakness.  While Ginsburg has proven that it is possible to film Pelevin’s “unfilmable novel,” it does not add new meaning or give an original interpretation of Pelevin’s text.  If it brings few surprises to viewers well familiar with Pelevin’s work, the film can serve as an introduction to viewers unfamiliar with the novel―if, that is, they are not overly confused by the esoteric subplot that complicates the film.

Generation P focuses on the life of a new post-Soviet man, Vavilen Tatarskii (Vladimir Epifantsev).  Immediately before the fall of the Soviet Union, he had enrolled in the Literature Institute, aspiring to the life of a dissident Soviet intellectual.  As the Soviet system collapses, however, he realizes that his planned role of a dissident poet will become obsolete in the new social order.  He begins his post-Soviet life as a lowly salesman at one of the ubiquitous post-Soviet kiosks selling cigarettes, alcohol, and contraceptives.  This unprepossessing job nevertheless exposes Tatarskii to the new culture of consumption, which inspires his first advertising slogans.  A chance encounter with an old friend, Morkovin (Andrei Fomin), and his “artistic talents” enable Vavilen’s new career as a successful advertising copywriter.  As a designer of television commercials and advertising posters, Tatarskii actively participates in the shift from socialist to consumerist society.  His position as a copywriter gives him the control mechanism over contemporary Russia.  In the end, Tatarskii becomes a leader of the ruling elite that governs this new Russia through manipulating the media. 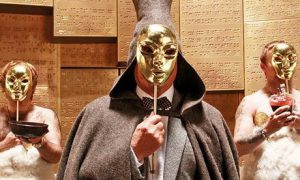 The film combines the story of Tatarskii’s professional growth as a copywriter, reflected in the numerous commercials, with his drug-induced hallucinations that reveal the occult connection between contemporary society and ancient Babylonian mythology.  This connection between post-Soviet reality and ancient Babylon is well represented by the protagonist’s name.  As we learn early in the film, Tatarskii’s first name, Vavilen,  is a combination of Vasilii Aksenov and Vladimir Lenin.  This peculiar combination ironically reflects the values and contradictions of the Soviet 1960s generation.  On the esoteric level, however, the name connects Tatarskii to Babylon (“Vavilon” in Russian).  The protagonist’s last name, Tatarskii, is similarly symbolic, referring simultaneously to the Tartar yoke and to the ancient Greek tataros or “hell.”  These references give demonic implication to Tatarskii’s role as the top copywriter and “symbolic husband of the Goddess Ishtar.”  Therefore, his name foreshadows Tatarskii’s spectacular ascent to the top of the power hierarchy.

The Babylonian legend related by Tatarskii presents ancient Babylon as a culture obsessed with power and wealth, and the same obsessions govern life in 1990s Moscow. In addition to its connection to consumerism, the references to Babylon create a picture of a highly conspiratorial and hierarchical system that is governed by chance.  His knowledge of the esoteric Babylonian myth, in combination with his unusual name, allows Tatarskii to occupy a position of absolute power.

Generation P ironically comments on the topic of the symposium, the “Russian middle class,” especially since Pelevin’s novel is tellingly dedicated to the “memory of the Russian middle class.”  On the most immediate level, the middle class was destroyed by the 1998 economic crisis.  At the same time, the very existence of the middle class is undermined by the novel’s conspiratorial principle, replicated in the film.  The protagonist’s rise to the top of the hierarchical structure illustrates the undesirability of belonging to the Russian middle class, due to the instability of this social position.  Thus, a number of Tatarskii’s friends and colleagues are murdered, and he himself escapes their fate only by becoming an occult analogue of a Russian oligarch.

Middle-class ideals, such as civil society and social engagement, are also tellingly absent in the world obsessed with consumption and struggle for survival.

In this consumerist autocracy, politics are largely irrelevant and are dictated by the copywriters.  The film’s virtual politicians serve primarily as tools for product placement.  For example, the copywriters control the cigarette brands that famous (yet virtual) politicians should and do smoke, and, unlike virtual politicians, changes in product placement have real consequences.  One of the computer programmers is assassinated for making a virtual politician smoke the wrong brand of cigarettes.  Ginzburg adds a nice touch to the theme of virtual politics, represented by the digital transformation of the chauffeur Kolia (Andrei Panin) into the main contender for the post of the future Russian president.

While many critics found Ginzburg’s adaptation unimaginative, the film generated larger box office receipts ($4.3 million) from domestic theaters than any other Russian film that summer.  It also had a successful run at numerous film festivals, including Moscow, Kinotavr, Toronto, Serbia, Mumbai, and Karlovy Vary, where it won a Crystal Globe in the competition for new films from East and Central Europe.  Pelevin liked the film and even asked Ginzburg to adapt the sequel to Generation P, Empire V.  This later novel presents an even more dystopian view of Russian society and an even more involved conspiracy.   Ginsburg already has plans for filming Empire V, which will have a significantly bigger budget than his first film. 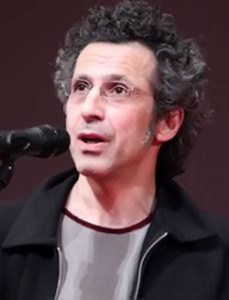 Viktor Ginzburg belongs to the same generation as Viktor Pelevin.  Ginzburg emigrated with his parents to the US at the age of 15. Educated in New York, at The New School and the School of Visual Arts, he now lives in Los Angeles.  Ginzburg is a successful director of commercials (soft drinks, jeans, bank cards, and shampoo) and music videos.  In 1993, Ginsburg visited Russia, where he made his first full-length film, the mocumentary, The Restless Garden (Neskuchnyi sad, 1994), which focused on the sex life in the Moscow underground of the early1990s.