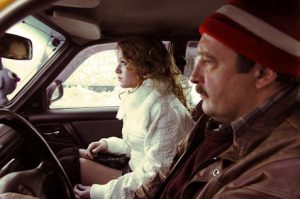 Three high school friends who used to play in a band called Gromozeka (a name compiled of the first syllables of their last names) meet again at the school reunion party, and then go to a sauna where they drink, sing karaoke, and take a steam bath.  In the sauna the following conversation takes place:  “How are you? – Ok.  And you? – Ok.”  The two characters look at the third friend and he repeats: “Ok.”  This is the opening scene of the film.  The rest of it is an exploration of the wealth of meanings behind these Ok’s: the pettiness, the absurdity, and the pain of the characters’ lives.

The film is preoccupied with the social structure of the Soviet period, which, although deformed and crumbled, still provides the governing mode of existence for millions of people born and raised in the country; and with its ideological and economical systems, which ceased to exist two decades ago.  Two decades is time enough for a new generation to appear, and the outmoded parents struggle to comprehend

their up-to-date kids, who operate successfully within the new structures, rules, and laws.  The discrepancy between the two worlds is exemplified in the dialogue that one of the main characters, a policeman, has with his grown-up son.  The father tries to make the son see the noble nature of his profession and to persuade him to become a policeman as well.  For the son, however, being a policeman is perhaps the most ignoble profession of all; it implies becoming a parasite, a watchdog for the state.  Instead the son chooses to be a member of a criminal group with its own logical structure and strict moral codes, both of which state institutions seem to have lost.

How does it feel to be an atavism?  And how does a person become one?  Gromozeka places the blame on history itself; on the way these characters had been educated and raised by the regime, interpellated through various cultural forms, and then left behind as the regime changed.

Gromozeka, apart from being the fictional name of their band, is a real character from a Soviet sci-fi book series for children written by Kir Bulychev about the adventures of Alisa, a girl from the future.  It was popularized in the 1981 feature-length cartoon The Mystery of the Third Planet (Taina tret'ei planety).  Gromozeka always tries to help his friends (mainly, Alisa and her father, a zoo director), but is always too late and invariably arrives after they have already managed to defeat all the bad guys themselves.  “Late!  Oh, how unlucky I am!”—is Gromozeka’s signature expression. 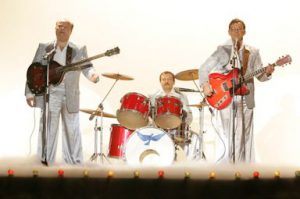 This figure provides the metaphor for the fortunes and travails of the three former friends.  They still live in the past—or, rather, they can’t reconcile the future as it had seemed in the past with the way it turned out to be. Gromozeka and his sci-fi world are all about that bright future.  In A Guest from the Future (Gost'ia iz budushchego), the famous TV adaptation of another of Bulychev’s novels about Alisa, a sixth-grader from 1980s Moscow travels 100 years into the future.  There the boy, whose name is Kolia, encounters two alien pirates who are trying to steal a device called mielophone from Alisa’s father.  To protect the device, Kolia takes it back into the past; the pirates and Alisa follow.

At the end of the film’s last episode, before being transported back into the future with the recovered mielophone, Alisa, as a token of her affection and gratitude, provides her new friends with short versions of their future biographies.  Alisa tells them that they will become great doctors, famous artists, award-winning tennis players, and even inventors of the time machine: “If you don’t believe me, see for yourself, in the future.”

Gromozeka is about the future that school kids of the 1980s finally got to, and about all the promises this future has not fulfilled.  It’s about the pain of realizing that Alisa lied after all: Kolia won’t grow up to be a famous poet—he will have died in a fire sometime in the mid-1990s, aged 26.  And the school-band Gromozeka won’t be the new Machina vremeni (appropriately enough, one of the famous Soviet rock-bands of the 1970s-1980s was indeed called The Time Machine).  Even their “nice” jobs will have become useless.  They will be too late for their own future, just like the cartoon Gromozeka.
The director and author of the script, Vladimir Kott, acts as a mediator, biographically placed between the slightly older generation of his main characters and the slightly younger generation of their kids.  He is old enough to remember the Soviet years, their films and songs; and yet young enough to have started building his life outside the Soviet era.  After working extensively for various TV channels, since 2012 he has been teaching new film directors at the Russian State University of Cinematography (VGIK) together with his more well-known twin brother Aleksandr (who directed the state-supported Fortress of War (Brestskaia krepost', 2011) and the recent Russian adaptation of the British hit TV-show Life on Mars).  It seems that at least these two members of the last Soviet generation made it on time.

The ending of Gromozeka, however, is not fully pessimistic even towards its characters. The 1980s pop song that they sing at the beginning and then reprise at the end is about the bird of future happiness that has to choose you, because tomorrow will be better than yesterday. But then, the song goes, the bird of luck will choose someone else instead: “Someone will be better than me; someone will be the one to compose the song of tomorrow.” The refrain also sounds pessimistic at first: “The steadfast heart will keep the love, but the bird of happiness will fly away again,” until the last time it is repeated: “My song will play; the heart will keep the love, and the bird of luck will come again.”  The heart will keep the love and hope will make the future worth waiting for: this message is also there from the very first scene of the film, but the story needs to reach its end before it sinks in.  As another, more popular band said it: “All you need is love.” 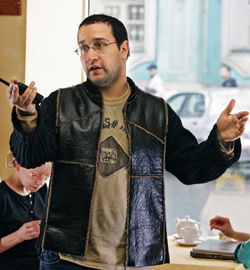 Vladimir Kott graduated from the directors’ department of the Russian Theater Academy (GITIS) in 1996 and produced plays in various Russian theaters (in Tver', Novgorod, etc.).  In 1999 he worked as a second unit director on the film Two Drivers, directed by his twin brother Aleksandr.  Two years later he enrolled in the Higher Courses for Screenwriters and Film Directors (class of Vladimir Khotinenko).  His graduation short film project The Door (2004) won multiple prizes at international festivals. Kott’s works has mainly included TV series, with his latest project based on the life of he famous Soviet singer Petr Leshchenko.