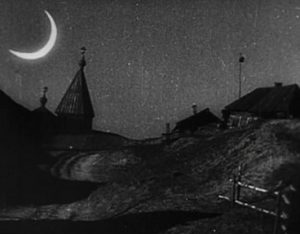 There is no way that, at the time of its production, Happiness would not have been read as a topical satire. The policy of collectivization, well underway by 1934, did not allow the “left-behind peasants” [otstalye krest′iane], those losers in the previous system that had nevertheless bought into pre-revolutionary practices, the space to exist outside of the new order. But, Soviet power was a kind and gentle power: Medvedkin’s film is an intervention with these left-behind peasants, as a cultivation of trust in the collective. Their dreams, desires, and fears are represented as reasonable, though ultimately counterproductive.

Medvedkin relies on the device of typage, in which character is determined by class and profession, not by individual psychology. Hence, though the events of the film span decades, the characters do not age or develop; they are simply recontextualized. The first half of the film depicts the circumstances of having nothing or, worse, having only very little in the pre-revolutionary era. Khmyr [Petr Zinov′ev], the uncommanding patriarch of a pathetic homestead, ventures out into the world to seek “happiness.” Fortuitously, he comes across a fat wallet of money. Khmyr and his wife, Anna [Elena Egorova], have no sooner celebrated this windfall, than the parasitic nature of lenders, the church and the state, becomes apparent.

The film abruptly shifts frames, and the same cast of characters is deposited on a collective farm, where a broken Khmyr is no longer even fit to drive a water cart, let alone master the power of a tractor. Moreover, he is not a benign flaw in the system. Rather, he serves as a point of access for saboteurs, those long-disempowered remnants of the parasitic classes.

Cut to France, late 1960s, when Chris Marker discovered Happiness. As a close friend of Medvedkin, the French filmmaker struggled to keep a critical distance in terms of their collegial relationship, particularly with regards to films in which Medvedkin’s position toward the Soviet system seemed unclear. However, Happiness did not suffer from such ambivalence: in Marker’s view, it was clearly a critical and satirical film about the discrepancies of the state order and a work to be praised. In this vein, French criticism has introduced many concepts of the comedic and political in reading Happiness, including “satire,” “humor,” “irony,” and, of particular interest here, the burlesque, or “mockery” that relates primarily to the performances of power and tyranny.

The film’s aesthetics lend themselves to such a burlesque reading. The mise-en-scène is in the style of lubok, the Russian folk tradition of woodblock printing, which incorporates a comical simplification of modern economic and political structures. The viewer is introduced to the village where Khmyr and Anna live through a black-and-white shot inspired by folk art. The effect of the drawing itself is magnified by its shading. The darkness of the land and rooftops are starkly contrasted against an impossibly bright crescent moon, adding nuance to the cartoonish aesthetics. This primitive visual effect penetrates even into the later, more prosaic trappings of the collective farm and signals a continuing visual and thematic subordination to power and tyranny even within the Soviet context.

This aesthetic practice also adds theatrical emphasis to the mise-en-scène and initiates a new way of conceptualizing the filmic text. It is possible, then, to connect the elements of satire, to which Marker first pointed, with the theatricality in the visual context. While the film’s design is connected to satire, its theatricality lends more than political meaning to the comedic elements, and also initiates a space in which to expand this interpretation.

The theatricality is maintained throughout a dream sequence in which Khmyr and Anna imagine themselves as king and queen. The scene opens with a medium shot, in which the viewer sees a set reminiscent of a provincial stage decorated for the theater. Khmyr and Anna enter and sit against a backdrop of scenery designed to mimic the stock image of a castle. The sequence is hyper-stylized: Khmyr and Anna gorge themselves on food while wearing heavily embellished costumes that recall the clichéd construct of royalty. Khymr’s vision is void of imagination, but it reflects the unconscious collective dream about what it would be like to be tsar. This scene is juxtaposed with an equally cartoonish, yet less forgiving moment of the portrayal of power and tyranny later in the film.

Just as theatricality allows for the visual juxtaposition of two burlesque moments, mocking power and tyranny, it also allows the viewer to recognize the artificiality of the roles played. For example, critics of Happiness have often noted an inversion of traditional gender roles in the relationship between Khmyr and his horse-wife, characterizing the one as a feminine man and the other as a masculine woman. Seeing Anna sweep Khmyr off of his feet in a passionate farewell kiss certainly piques questions about normative gender performance in this film. However, other moments, such as an eerie dance in celebration of their meager harvest, seem to signal that another dynamic is at work, but not at the expense of traditional gender roles. Anna is the epitome of the Russian baba, the embodiment of surplus, from her abundant bust to her workhorse strength. Khmyr cannot help but come across as puny in her arms. This discrepancy reflects, not his feminization, but the classic comedic device of incompatibilities: short and tall, fat and thin. Here, Anna overflows, while Khmyr shrinks away in his oversized clothing. Their relationship adds another visual and thematic layer to the interpretation of power and strength, and creates a space for expanded interpretation.

Happiness is satirical, but satire does not account comprehensively for the humor and attraction of the film. It creates, instead, a space in which the performance of whimsical comedic elements develops. If previous reception has instrumentalized the comedic and theatrical aesthetic of the film, it has also left room to reinterpret these elements precisely in the disconnection between them and the text’s didactic purpose. In this intermediate space, the viewer may find, if not the elusive object of “happiness,” “camp.” 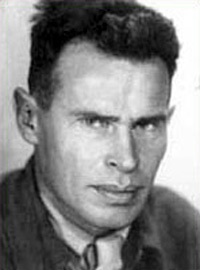 Aleksandr Medvedkin was born in 1900 in Penza into a peasant railway worker’s family. As of 1919, he served in the Red Army, the majority of the time in the propaganda sector. In 1927, he moved to the military film organization Gosvoenkino, where he led expeditions to document the First Five-Year Plan in a mobile film studio carried by train. At Mosfil′m between 1933 and 1940, he made his most famous films, including Happiness (1934) and New Moscow (1938). Medvedkin continued regularly making feature films in the Soviet Union into the 1980s, and died in 1987.