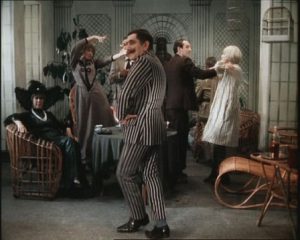 Somewhere in 1920s England a homeless Babbs Babberley (Aleksandr Kaliagin) with a penchant for acting is mistakenly pursued by policemen. They suspect that he has stolen a suitcase of a famous, very wealthy Brazilian widow, Donna Rosa D’Alvatorez (Tamara Nosova), who recently returned to her homeland. Discovering that the suitcase is full of women's clothes, Babbs quickly dons them, trying to put the policemen off his trace. They are still in pursuit, however, so he runs into a house where, accidentally, this very woman, Donna Rosa, is expected by her young nephew, his best friend, and an assortment of other characters. The young men need the influence of the wealthy widow to persuade the guardian of the two women they love to let them get married. The guardian (Armen Dzhigarkhanian) seems not to be averse to marrying into money himself. There is also the old brave Colonel (Mikhail Kozakov), desperately in need of money, and therefore, of a wealthy wife. The pretend aunt is caught in between all these conflicting interests while secretly longing for his/her own true love―a beautiful young girl (Tat'iana Vedeneeva) he/she happened to glimpse on the street and in company with the real aunt from Brazil. The real aunt, of course, appears in the house as well... This trifling farce makes for one of the funniest and most popular Soviet comedies of the Stagnation era.

The original play, Charley’s Aunt by Brandon Thomas, premiered in London in 1892 and has a long performance history around the world, including Russia, where it was first staged in 1894. Its popularity among pre-Revolutionary audiences is hardly surprising considering the Silver Age’s reputation for sexual transgression (and, sometimes, bawdy humor). What is more surprising is its lasting popularity with theater and TV-audiences of the Soviet Union (the first Soviet translation of the play came out in 1937).
Soviet TV-productions were easier to get off the ground than “legitimate” films. The effort, the skill, and the passion that went into these productions, however, were sometimes even greater. By 1975 Viktor Titov was already a relatively well-known director and scriptwriter, who mostly worked on TV, and was considered as nothing more than a dependable professional. His cinematographer on this project, however, was Georgii Rerberg, who had just finished working with Andrei Tarkovskii on Mirror (1974). His cast included highly respected theater actors―Kaliagin, Dzhigarkhanian, and Kozakov (who appears in another film of this year's retrospective, Amphibian Man).

Kaliagin’s performance has become the most famous of the precious few images of drag queens on the Soviet screen (his only rival is, probably, Oleg Tabakov in the role of Miss Andrew, the governess from hell in the 1985 TV-adaptation of Mary Poppins). Of course, Babbs’ reluctance at playing the role of Donna Rosa, as well as his heterosexual object of desire, are constantly emphasized by the filmmakers. The film, nevertheless, has enough moments of transgression and ambivalence to make for a compelling case of camp sensibilities in the Soviet era.

Titov emphasizes the artificiality of the film’s world. It is as much a celebration of silent cinema as of sexual transgression. Hello starts with its main character, Babbs, watching famous early comedies and movie stars, such as Buster Keaton and Max Linder. He is then shown entering Forrest Gump-style the filmic space they occupy (predating Tom Hanks’ character by two decades!). 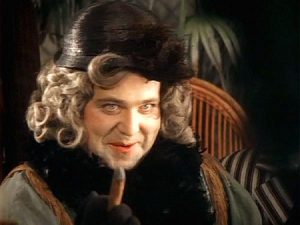 Of course, the main difference that Titov introduced into the play’s plot was making Babbs a poor man, a member of the oppressed classes, as opposed to the original Oxford undergraduate Lord Babberley. Hello, however, is less a class-conscious than a cinema-conscious movie: while certain plot moments are reminiscent of Some Like it Hot, Kaliagin is extremely Chaplinesque in his portrayal of a small fat funny man with a big heart and sad eyes. The true liberty that the film takes, and the most astonishing from today's standpoint, is its celebration of the pure joy of acting; of the freedom of being someone else, of pretending, of exaggeration―all for art's sake.

The actors repeatedly break “the fourth wall,” addressing their asides to the viewers (a device common in theater, but at this point still striking on TV). They engage in the slapstick of running, fighting, and cake-throwing. At times it seems that no one in the film actually believes Kaliagin’s character is a woman; all of them are simply engaged in a merry game of make-believe, in which viewers are invited to participate. The temptation is impossible to resist.

Apart from Kaliagin’s tour-de-force performance, the film is full of small gems, dear to the heart of any mass culture junkie. The film’s phrases, many of which were written or improvised by the film’s director, have entered the vocabulary of Russian citizens. The catch-phrase that is the film’s title has become an expression of astonishment, popularized by one of the greatest Russian actresses and a renowned wit, Faina Ranevskaia, in the film Easy Living (Legkaia zhizn', 1964). The poem by Robert Burns, translated by Samuil Marshak, the famous Soviet children's poet and a translator of Shakespeare, becomes the lyrics of a passionate Brazilian tango performed by Kaliagin. And his love object is played by a young woman who had not had many screen roles, but her face became known better than the faces of their relatives to the last Soviet generation. Tat'iana Vedeneeva, the host of the main Soviet children’s TV-program Goodnight, Kids (Spokoinoi nochi, malyshi) was known to them simply as “Aunt Tania.” 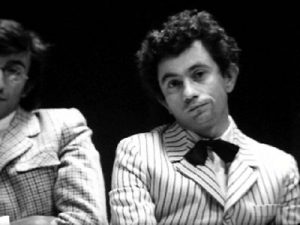 Even before Viktor Titov graduated from the State Institute for Filmmaking (VGIK) in 1968, he had worked at local radio and TV stations in Rostov-on-Don. He worked mostly in television, writing or co-writing many of his scripts. Although Titov made several successful TV movies and mini-series, including adaptations of novels by Maksim Gor'kii and Veniamin Kaverin, Hello, I’m Your Aunt! (1975) has remained by far his most famous work. In 1999, a year before his death, the director received his only professional award―the prize for life-long contribution to Russian cinema at the Vyborg film festival.