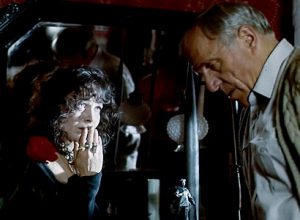 House under a Starry Sky is the third film in Sergei Solov'ev’s Perestroika trilogy, which also includes Assa (1987) and The Black Rose is An Emblem of Sadness, The Red Rose is An Emblem of Love (Chernaia roza—emblema pechali, krasnaia roza—emblema liubvi, 1989) and which the director himself has called “The Three Songs of the Motherland.” Already in the first two films of the trilogy, the director incorporated elements of the absurd, pastiche, and dark humor. In House under a Starry Sky, Solov'ev masters these techniques and develops further the collage of sots-art, dark humor, and steb (mockery). He intertwines the genre conventions of melodrama, criminal drama, comedy, action film, and thriller.
House under a Starry Sky focuses on the Russian intelligentsia—the Bashkirtsev family—whose life, in the beginning of the film, seems not to be disrupted by the new conditions during the transitional time of Perestroika. The Bashkirtsevs’ life is different from the life of average Soviet citizens. The film is imbued with signifiers of the Bashkirtsevs’ social “otherness”: a large summer cottage, expensive jewelry, access to deficit goods, foreign electronics, and trips abroad. While being at the top of the power hierarchy, with his “people’s deputy immunity” and his connections, presumably, with the KGB, the head of the family, Andrei Bashkirtsev supports a thorough reconstruction of society rather than the “renewing” of socialism.

Among many features of camp style in cinema are excess, exaggeration, and theatricality. The narrative excess in Solov'ev’s film is represented by the shooting scenes, which extend for a long time, and the scenes of torture and murder, which are very graphic, with close-ups of bloody faces and bodies. Solov'ev also creates characters with exaggerated vices and characteristics. Party members are portrayed as corrupt, mercantile, but ineffective, and the secret police is represented as a group of powerful criminals, who use extreme methods, such as torture and murder, to achieve their goals, but who at the end are defeated by a couple of teenagers. Therefore, the system no longer works.

Because House under a Starry Sky was made during the last months of the gradual disintegration of the Soviet Union, Solov'ev uses Soviet signifiers in his film with a grain of irony or steb. The name of the country ceases to play an important role and, in the film; it is trivialized to the inscription “CCCP” made with studs on the back of the special service agent’s leather jacket. Bashkirtsev’s birthday gift—a small artwork dedicated to the founder of Soviet rocketry and astronautics, Konstantin Tsiolkovskii—invokes only giggles among the Bashkirtsevs and ends up injuring one of the family members. Thus, the meaning of Soviet symbols is revised and transformed in Solov'ev’s film as in many works of sots-art.

Besides steb, Solov'ev also employs fantastic elements that are pushed to the level of absurdity. These elements complicate the narrative of the film and also create parallels to Mikhail Bulgakov’s novel Master and Margarita. This parallel is important insofar as Solov'ev, like Bulgakov, chooses to tell a tale about current events in the country while framing them with the magical, the mystical, and the biblical. In House under a Starry Sky, the decapitation of the special service agent during a motorcycle accident recalls the decapitated Berlioz in Bulgakov’s novel; a woman, who is cut in half but who stays alive as a result of a magic trick, is also an indirect citation of magical events in Master and Margarita; a diabolic character, Valentin Komposterov, who, after numerous murder attempts, revives, is a combination of Bulgakov’s Korov'ev, Azazello, and the cat Behemoth. The fantastic components allow Solov'ev to create displaced references between the cinematic narrative and the historical chaos during the last year of the Soviet empire, when many events and situations seemed to be ridiculous and unrealistic. 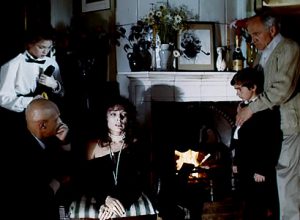 Religious references also have a special meaning in House under a Starry Sky. Bulgakov dedicates an entire section to biblical characters, while Solov'ev’s film includes only some references to the Bible. Bashkirtsev needs to be “sacrificed” for the future of the young generation by the adherents of the old regime. He even resembles Jesus Christ visually, with the thorns of the wire stuck in his naked, bleeding torso. By the end of the film, the role of God is depreciated and a man’s destiny is placed in his own hands. This idea is suggested in the song, “About the Disappeared Swan (Hare Krishna),” by legendary Perestroika rock musician Boris Grebenshchikov: “There is no justification for God; you are your own justification.”

The destiny of the country is placed in the hands of two teenagers—Nika (Mariia Anikanova) and Timofei, played by Solov'ev’s sixteen-year-old son, Mitia. The teenage romance between them develops as a supplemental narrative line and concludes the film. After two hours of absurdity and excess, the darkest and most grotesque of the films in Solov'ev’s trilogy, House under a Starry Sky ends with a teenage couple taking revenge on the state representatives and escaping their persecutors.
Both Assa and The Black Rose became Perestroika cult films, symbols of youth culture in the period of transition. Marking the end of Perestroika cinema, House under a Starry Sky, however, went almost unnoticed by young audiences and the general public. Despite that, the film was acknowledged by film critics. In 1992, the film was nominated in the categories “Best Supporting Actor or Actress” and “Best Cinematographer,” and received an award in the category “Best Production Designer” at the Nika award ceremony, as well as a special jury prize in the 1992 Kinotavr Film Festival in Sochi. 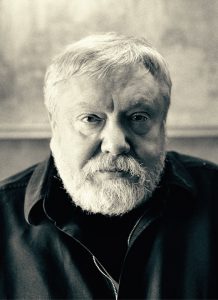 Sergei Solov'ev received a degree in Directing from the All-Union State Institute of Filmmaking (VGIK) under the supervision of Mikhail Romm in 1969. Between 1969 and 1987, he worked at Mosfil'm Studio as a script-writer and director of feature and documentary films. He debuted as a film director in 1969 with a film adaption of Anton Chekhov’s stories, Family Happiness (Semeinoe schast'e). Between 1994 and 1997, he was the Chairman of the Russian Union of Filmmakers. In 1994-1998, Solov'ev was the President of the Moscow International Film Festival. Since 1987, he has also been working as a professor at VGIK and running the creative association "Krug."