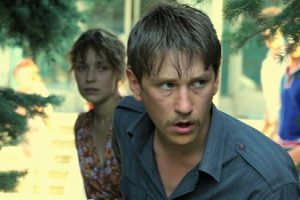 Innocent Saturday is the second film, after Soar (2007), directed by Aleksandr Mindadze, who is better known for his screenwriting career and his long collaboration with director, Vadim Abdrashitov. As in his directorial debut, the narrative of Innocent Saturday is set by a single traumatic event—the Chernobyl nuclear meltdown in April 1986—which interrupts the peaceful life of the main characters and reveals the existence of some deeper secrets and dysfunctions in the society of a small Ukrainian provincial town.

The director does not start his film with the explosion at the reactor, but gradually develops the post-accident story of the residents of Pripiat'—the city that was specifically built for the employees of the nuclear plant in the 1970s. Only one third of Innocent Saturday really deals with the horrifying nuclear disaster; the rest of the film depicts the life of average Soviet people on the weekend, as if nothing has happened. Mindadze juxtaposes these two different parts of his film visually. From the opening scene, in which the main protagonist, Valera Kabysh, the instructor from the City Committee, is running to the nuclear plant, the colors of the setting are dark and sometimes the shadows do not permit the objects or people’s faces to be seen very well. The second part of the film is imbued with the joyful, bright colors of the residents’ clothes and the happy signs of the weekend—children playing outside, nice high heels that are meant to be worn only on days off, and drunk young people having fun at Komsomol weddings. The director’s focus on peaceful life at the height of radioactive contamination is even reflected in the title—Innocent Saturday (On Saturday in the original Russian version). As Mindadze stated during a press conference, Innocent Saturday is “not about the history of the Chernobyl accident, but about the flourishing of life during the minutes of mortal danger.” Indeed, the director does not show the minutes of explosion, but is more interested in people’s reaction to the accident during the first hours after the explosion.

Valera is among a few people who finds out about the real devastating consequences of the explosion at the nuclear plant. However, because revealing this secret to other people may cause him to lose his Party membership card, as he is threatened at the plant and by the city authorities, the only scenario for him is to keep silent and to flee from the city. He chooses Vera, a local plant worker, to escape with him, and Innocent Saturday follows the couple’s interaction while they try to make their way out of the city. The first dysfunctions in people’s mentality and reaction to the explosion are disclosed in the scene in which the plant authorities not only refuse to evacuate the city, but even personally go to the exploded reactor to evaluate the damage. They depend on directives from Moscow to make any decisions regarding the accident, thus, the province entirely depends on the center. At the same time, as it is shown in Innocent Saturday, and as happened in 1986, the center does not care about the periphery and allows Pripiat's residents to be exposed to a high dosage of radiation during the first thirty six hours after the meltdown. 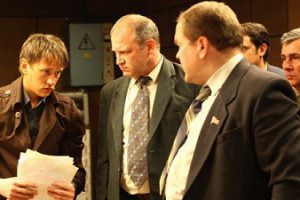 Mindadze’s film is about the threat that is, if not ignored, at least underestimated, due to its invisibility. The only markers of the catastrophic event are the taste of metal in the residents’ mouths and the fire over the reactor, the view of which the residents enjoy from across the river. Because of the difficulty in detecting radiation, even the authorities do not recognize its lethal effects. Viewers become omniscient witnesses of the residents of Pripiat'―from workers and bosses at the nuclear plants to the pregnant bride and guests at the wedding―slowly getting harmful dosages of radiation. The horrifying consequences of the nuclear meltdown are emphasized by creating a documentary effect through the skillful handheld camera technique by Romanian cameraman Oleg Mutu. The absence of non-diegetic music throughout the film also adds an element of “authenticity” and some realistic feeling.

The reaction of the locals to the accident partially reflects Moscow’s attitude toward the safety of Soviet citizens in the periphery. Because of a broken heel, Valera and Vera miss the train, and, while realizing the scale of the nuclear meltdown, they go to the local department store to buy Vera new shoes from Romania. From that moment, Mindadze distances the film from the catastrophe and begins to explore casual life in Soviet Pripiat', and reveals the personal problems of residents. He shows that Vera is more concerned with getting shoes that she likes or earning extra money by singing at a local restaurant than with escaping from the dreadful radiation. At the restaurant, it is revealed that Valera, who, under the nickname “Johnny,” used to play with the pop band from the wedding, “betrayed” his friends-musicians after becoming a Party official and ruined their music career. In comparison to all these “real” troubles, the invisible nuclear threat does not carry any importance anymore. All the revelations about the residents’ problems and interactions are accompanied by a variety of songs, performed by the band and extensive drinking, both of which distract the protagonists from the accident.

By the end of the film, the power of red wine, with its purported “decontaminating” effects not only allows the characters to forget about the explosion, but also helps them to rebuild some fraternal connections. Nothing else matters anymore, and, in the final shot, Valera threatens the nuclear monster by pointing his fist at the exploded walls of the reactor. Mindadze’s unusual study of one of the largest nuclear disasters in the twentieth century―through the prism of the personal experience of local residents―has provoked interest in Innocent Saturday among domestic and international film festivals. The film participated in the 61st Berlinale International Film Festival in Berlin and the 9th “Spirit of Fire” International Debut Film Festival in Khanty-Mansiisk. 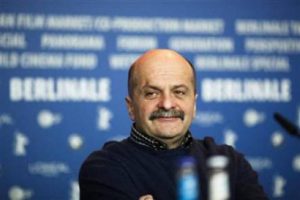 Aleksand Mindadze was born in 1949 in Moscow and graduated from the State Institute for Filmmaking (VGIK) with a degree in screenwriting in 1971. While studying at VGIK, he met Vadim Abdrashitov, with whom he continued working for more than 25 years. Many of Mindadze’s scripts were adapted to the screen, with some of them, such as Pliumbum (1986) and A Play for Passenger (1995), receiving prestigious awards at international film festivals. He is also a three times award winner of the Nika.