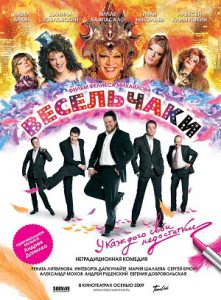 Jolly Fellows was advertised both in Russia and abroad as the Russian Federation’s first drag queen movie. Billed as an “unconventional comedy,” the film’s tagline, written in lipstick, asserts: “Everyone has his own shortcomings” (У каждого свои недостатки). The release of the first commercial film to deal with the topic of sexual minorities comes at an interesting time for Russia, as local bills forwarded in St. Petersburg and Moscow city governments seek to outlaw public displays of homosexual behavior. Moscow mayor Iurii Luzhko himself called gay parades “satanic acts.” The film was made on a two million dollar budget, and despite the recent political movements to limit the expression of gay culture in Russia, the film played in twelve theaters in Moscow, including nine multiplexes, without any legal issues.

The plot features five friends who perform as drag queens in the same nightclub. The group ranges in age, with the country lad Liusia and Muscovite Gelia forming the younger generation, and the middle-aged characters Roza, Lara, and Fira representing the older one. The film heavily relies on its well-known and very much cosmopolitan cast, including Finnish actor Ville Haapasalo and Lithuanian actress Ingeborga Dapkūnaitė, two international fixtures in the Russian film industry. Renowned Russian actress Renata Litvinova also plays a small role as the estranged ex-wife of one of the drag performers.

The film is narrated as a series of episodes told to a Moscow newspaper reporter, who interviews the friends at a kitschy, Soviet-themed café. Many of the scenes, however, take place in the nightclub, as the film sets up two distinct spaces; the nightclub and its nightlife, an idyllic and safe space, is pitted against the unforgiving outside world of Moscow and Russia. Mikhailov based some of the film on his experiences working in Moscow nightclubs for three years during Russia’s default in the late 1990s.

Jolly Fellows opens with a dictionary entry of the term “travesty,” defining it theatrically as “an actor or actress playing the role of the opposite sex” and “a type of humorous poetry.” Life is rendered frivolous through acts of cross-dressing, but often it is Russia and its Soviet past that bear the brunt of the joke. One of the first scenes takes place in the Brezhnev era and features a rehearsal for Soviet officials of a gypsy dance number titled “Gypsy Love.” Unbeknownst to the officials the lead gypsy is a man in drag. They enjoy the performance, and it is only at the close of the song that the trick is revealed. The head official publically chastises the performance, not because of its drag elements, but because the song they played was by a musician who had betrayed the Soviet Union, leaving during the Second World War. He later privately invites the lead actor to his apartment to see his foreign record collection. In one of the film’s first gags, Mikhailov queers the cultural tastes of the Soviet arts scene and the bureaucrats who lead it. 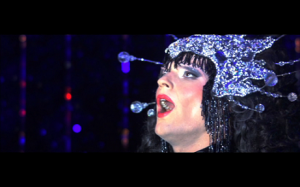 The film certainly recognizes the comic potential of the drag queen, but at the same time it delves deep into the plight of sexual minorities in the Russian Federation. As the celebration of glam runs out of gas, the film begins to explore various topical issues, such as HIV/AIDS, with dire consequences for the characters involved. The positive test result of one character is less a condemnation of his homosexuality than it is of his promiscuity. By the film’s end, the comedic scenes that drive Jolly Fellow’s main message make a turn toward tragedy.

In stark contrast to these problems is the musical world, as performances interrupt and suspend the crises of life. The film is not a musical, but music itself is a way for the characters to retreat from their problems. The score of the film was written by Andrei Danilko, who represented Ukraine at the Eurovision Song Contest in 2007 in drag under the stage name “Verka Serdiuchka.” Danilko’s feature track, “Casta Diva,” is played throughout the film, both during stage performances and as non-diegetic music in episodes outside the nightclub. Several scenes make gestures toward the film musical genre. Spontaneous musical outbursts transform harsh surroundings such as the Russian village into a utopia, where everyone can dance around and share a song number with the outsider: the drag queen. Music always provides levity for the most serious moments in the film.

Like its slogan, Jolly Fellows certainly is a film fraught with shortcomings. The five characters are not fully developed individually or as a group, and the narrative clumsily ties their personal stories together within the present timeframe of the film’s action, the interview in the café. Additionally, by bringing the Russian drag queen to the screen, the film offers little new ground to the drag queen genre, but often operates on clichés to fill in the narrative’s gaps. The film is important in the arena of contemporary Russian film, however, and while it took ten years to fund and produce, it goes far beyond any Russian or Soviet film on the topic of sexuality and gay culture. 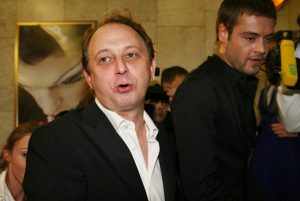 Feliks Mikhailov graduated from the St. Petersburg State Institute of Theater, Music and Cinematography in 1992. He served as a stage director in television for First Channel on the shows Stars on the Ice, Circus with the Stars, and The Ice Age. He also helped produce numerous awards ceremonies, including the “Teffi” award ceremony in 2006 and 2007. Jolly Fellows marks his debut in feature length films.