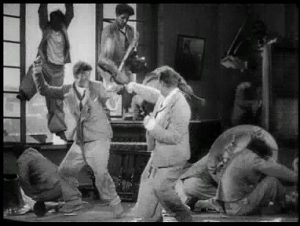 Jolly Fellows was one of the first Soviet musical comedies. Released after the main tenets of Socialist Realism had been formulated, but before their implementation in Soviet cinema had been regularized, the film generated enormous controversy. Opponents attacked it for its ideological and narrative laxity, while supporters lauded the quality of its gags and music. The film’s release was guaranteed by the fact that Stalin and other high ranking communists enjoyed the film tremendously; Stalin said that watching the film made him feel “as if I’ve spent a month on vacation,” while Andrei Zhdanov reportedly laughed especially hard at a gag featuring a fish in a bathing suit. It was also a major hit with the Soviet public. Many viewers returned to the cinema to watch it again and again, and the film’s songs immediately entered the popular repertoire.

The film originated as a vehicle for Leonid Utesov, a star of the Leningrad variety theatre, building a plot around a musically talented shepherd named Kostia (a composite of several characters from his stage shows), while prominently featuring the jazz orchestra that he conducted, as well. Utesov and his orchestra were not the only talent from the Soviet stage that Grigorii Aleksandrov turned to for the project: Nikolai Erdman and Vladimir Mass, two of the most popular theatre satirists of the period, were commissioned to write the script, and Isaak Dunaevskii, the musical director of the Leningrad music-hall, was asked to compose the score. Jolly Fellows also launched the film career of Liubov' Orlova (Aniuta), who would become one of the Soviet Union’s biggest movie stars (and Aleksandrov’s wife). The stars’ personalities are heavily relied upon to carry the film, and characterization is minimized (much to the annoyance of literal mined critics who found the middle-aged Utesov not very believable in the role of a young shepherd).

The minimal plot of Jolly Fellows, which traces the shepherd Kostia’s path from his animal herd to the stage of the Bolshoi Theatre and the resolution of a love triangle, is drawn from the conventional tropes of the American production musical. Continuity and causality are de-emphasized—for example, the scenes justifying Kostia’s trip from the countryside to Moscow were cut before shooting even started. Instead the narrative serves to move us from one gag to the next, and from one song to the next. These gags are frequently visual (the transformation of instruments into weapons during the rehearsal-fight) or musical (the “original interpretation” of Liszt’s “Hungarian Rhapsody” conducted by Kostia at the Moscow Music Hall); and by the end of the film the verbal gags (Kostia’s Marx Brothers-like wordplay on the beach) and situational comedy (Lena mistaking Kostia for a famous conductor) have been almost entirely left behind.

Jolly Fellows presents a musical utopia, where distinctions between high and low culture have been erased. Classical music is performed on the stage of a music hall, while popular music is performed at the Bolshoi. Jazz meshes seamlessly with the folk chastushki form, rubs elbows with Beethoven, and begins to make way for the new genre of mass song. In this world, musical instruments have lost their monopoly on music making: here music can be made using literally any object, from everyday items like the planks of a road or pots drying beside it to various parts of the human body. This utopia is anti-elitist as well: shepherds and kitchen maids can become stars, while the pretensions of the cognoscenti are repeatedly shown to be a form of name-dropping not backed up by any real ability to appreciate what they hear. 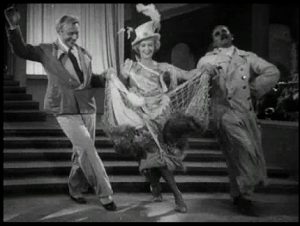 The film is heavily engaged with American cinema from the very first frame, which announces that Charlie Chaplin will not be appearing in the movie. Aleksandrov undertook the making of the film following a long trip to Hollywood as Sergei Eisenstein’s assistant, and the film is unashamed in its borrowing of American slapstick, musical comedic devices, and even animation techniques. But the film also looks back to Soviet culture of the 1920s, borrowing the traditional satirical target of bourgeoisie leftovers, reinventing Eisenstein’s avant-garde “montage of attractions,” and revisiting the looser climate that prevailed before the Cultural Revolution and the First Five Year Plan.

Jolly Fellows was, however, made in the 1930s―not in the 1920s―and camping under Stalin involved real dangers. While Aleksandrov was praised for this and subsequent films, the scriptwriters Erdman and Mass were arrested during the shooting for writing fables that were considered anti-Soviet and spent the rest of the decade exiled from the capitals. The cameraman, Vladimir Nil'sen, would be arrested a few years later while shooting Volga-Volga, another of Aleksandrov’s comedies, and executed. Despite the refrain of “The March of the Jolly Fellows” it was far from certain that “If you sing your way through life/ You will never lose your way.” 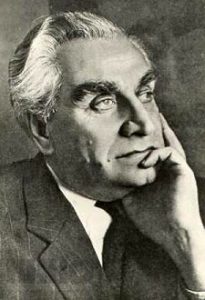 Grigorii Aleksandrov (1903-1983):
Before launching his career as a director, Aleksandrov worked as a scenic technician at the Ekaterinburg Opera House, an actor at the Proletkult Theatre, and an assistant to Sergei Eisenstein, with whom he traveled to Hollywood in 1929. He is best known for his musical comedies of the 1930s, all of which starred his wife Liubov' Orlova. From 1950-1957 he taught at the State Institute for Filmmaking (VGIK). He was named a Peoples’ Artist of the USSR and a Hero of Socialist Labor.