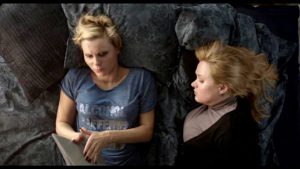 Kokoko begins when Vika (Iana Troianova), a woman from the provinces, and the demure intelligentka Liza (Anna Mikhalkova) meet by chance in a train compartment on the way to St. Petersburg.  After they exchange greetings, Vika happily exclaims “Fantastic! We’re traveling without men”  Vika’s statement acts as a guiding heuristic device for watching the film: it is a trip without men, a film built around two female protagonists and the relationship that develops between them.  More specifically, it is an experience without muzhiks—Vika’s colloquial word that may best be translated as “real” man. For Vika and Liza there are no “real” men in the film—men are a source of emotional trauma.  They disrupt, but ultimately do not destroy, the relationship between them.

From the first shots in the film it is clear that Vika and Liza are opposites.  Vika is outgoing, boisterous, and rough around the edges, while Liza is introspective, reserved, and socially sophisticated.  With her purple leopard-print coat, bright red lipstick, and short blond hair, Vika radiates a type of trashy sexuality—by Liza’s account, Vika dresses like a prostitute—while Liza gives the impression of repressed or unexplored sexuality, with her drab gray clothes, mousy brown hair, and book in hand.

Vika and Liza’s differences concern more than just visual appearance—they reflect a social difference of class that becomes quickly apparent.  After a night in the train compartment, they wake up to discover that they have been robbed of their money and documents.  Upon arrival in St. Petersburg, they go to the police station to report the incident, where perceptions of class become important to how the police interpret their stories. Vika is detained, while Liza is allowed to go.

Liza walks out of the police station, but a guilty conscious prompts her to return.  She tells the police that nothing was stolen, so Vika can be guilty of no crime.  Vika is released and the two become friends.  Vika, who has come from Ekaterinburg, has no money, no documents, and no place to go.  Liza invites Vika to live in her spacious St. Petersburg apartment.

At this point in the film, it looks as though the strong visual and thematic dyads that define Liza’s and Vika’s diametrically opposed personalities are the set-up for a female buddy film.  There is one thing that unites these two women and pushes their relationship forward, though:  They both have been jilted by men, and now find themselves middle-aged and single.  As the plot unfolds and their relationship develops, it becomes clear that this film is not so much about camaraderie and bridging differences of class as it is about courtship, desire, and the possibility of romantic love between women.

At first, Vika’s and Liza’s activities are coded in terms of male heteronormative bonding rituals.  They enjoy a night of drinking and conversation together, moving from wine to vodka to marijuana.  They later go out for beer and steamed shrimp, a quintessentially male activity in Russia.  As the two become closer, though, Vika’s and Liza’s behaviors become gendered in opposing ways.

The initial model for their relationship is one of Russian domestic bliss.  Vika, the wife, stays at home, cleans the apartment, and makes dinner; Liza, the husband, goes to work at the Kunstkamera museum.  As Vika begins to draw Liza out of her shell, the gender roles switch. Suddenly Liza becomes feminized when she lets her hair down and wears the bright red jacket that Vika has bought for her.  As they go out on the town, Vika now plays a masculine role, breaking a bottle to protect Liza and herself from the unwanted advances of drunken men. 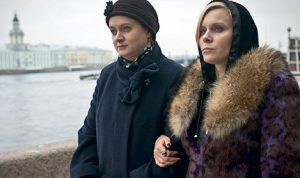 If this encounter with men strengthens their relationship, the succeeding encounters weaken it.  Vika develops an interest in Liza’s coworker and long-time friend Mitia, also an intelligent.  Even though Liza and Mitia had never been involved, Liza becomes jealous when she returns home to find Vika giving Mitia a massage.  Vika understands that she has violated unspoken boundaries and apologizes to Liza with coquettish tone and gesture, transferring her object of flirtation from Mitia back to Liza.
Vika’s affection appears sincere.  When Liza and her ex-husband Kirill (who works with her in the museum) get drunk and sleep together one night, Vika comes to Liza’s rescue the following morning after Kirill tells Liza he divorced her because of her physical appearance.  Vika shuffles Kirill out the door and comforts the shattered Liza.

Liza and Vika’s relationship seems to be as strong as ever until Liza comes home one day to discover Vika and Kirill having sex.  Liza locks herself in her room while Vika sits outside her door, weeping and begging for forgiveness.  Liza eventually comes out of the room.  It would appear that Liza has forgiven Vika, until she tries to smother her in her sleep.  Vika fights back, and the two end up where they started—the police station.  Once again, Liza’s social position gives her the upper hand.  She signs a statement condemning Vika and leaves the building, but she then quickly returns to claim it was all a mistake.  Vika counters that Liza tried to kill her. The film ends with both women supplicating the police: Liza begs for Vika to be released and Vika begs not to be handed over to Liza.

The title Kokoko is an otherwise meaningless word that comes from Vika’s misarticulation of the term “rococo,” which she hears for the first time when Liza narrates to her movements in the visual arts.  There is a distinct verbal pleasure in saying the word kokoko itself, and for Vika and Liza it becomes an inside joke that conceals something more: their failure to communicate mutual romantic feelings. 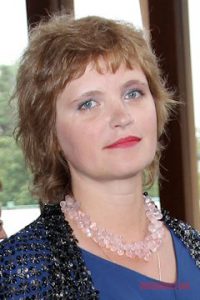 Avdot'ia Andreevna Smirnova is a film director, screenwriter, television anchor, and essayist. She was born in Moscow to a cinematographic family: her mother Natal'ia née Rudnaia is a theater and film actress and her father Andrei Smirnov is a film director, most notably of the Soviet classic Belorussian Trainstation (1970).  Smirnova began her career as a journalist and book reviewer before she started writing film scripts in 1992.  She made her directorial debut with Connection in 2006.  In 2012, Smirnova won awards for her directorial and scriptwriting work in Kokoko at film festivals in Moscow, St. Petersburg, and Blagoveshchensk.