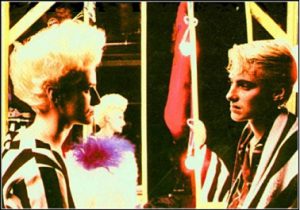 Slava Tsukerman’s Liquid Sky is an independent film made not very long after his emigration to the United States. Borrowing the title from a slang term for heroin, Liquid Sky conveys the vibrant atmosphere of New York in the early 1980s by focusing on the New Wave crowd, then the most dynamic group of society. At the time of its release Liquid Sky provoked heated arguments among film critics but is now generally acknowledged as one of the formative forces of independent cinema. The film was well received at festivals, attracted a wide international audience, and has since become a cult classic.

Set in downtown New York in the 1980s, the film shows the life of androgynous fashion model, Margaret, who represents a contemporary anti-Cinderella type. The main characters in the film undermine traditional perceptions of gender normativity and fixed identity. Margaret and another model, Jimmy, are both played by the same actress (Anne Carlisle), deftly epitomizing this breakdown of gender. Throughout the film Margaret repeatedly encounters violent sexual advances in her world, which is full of drug-induced euphoria and sadomasochistic violence. Meanwhile, a UFO the size of a dinner plate lands on the roof of the penthouse where Margaret lives with her girl-friend, Adrian (Paula E. Sheppard)―a performing artist and drug dealer. The alien creatures, who have come to absorb the opiates released during heroin use or orgasm, become Margaret’s savior by eliminating anyone who has sexual intercourse with her. At the same time, another alien, posing as a German scientist (Otto von Wernherr) arrives in New York to observe this UFO. Incorporating the main tropes of the time―drugs, sex, and alien creatures―the plot of the film is delivered in a highly stylized manner.

The style of this film serves as a refreshing counterpoint to the somnambulistic atmosphere of the post-punk life style depicted in it. The closely captured slice of the life of New Wavers in downtown New York is punctuated by thoroughly designed moments of “alienation.” New Wavers, as members of the post-punk subculture, differ from their predecessors, the outrageously rebellious punks, in their narcissistic and only moderately rebellious mood. This manifested superficiality and narcissistic rejection of any deeper meaning results in the overall theatricality of the New Wavers’ lifestyle. Liquid Sky carefully conveys the style of the New Wavers by mixing pervasive sexual relations, hallucinatory drug euphoria, and fashion shows with outlandish costumes, makeup, and space design, all accompanied by electronic music. The film, however, does not merely replicate this outlandish mode of New Wavers from inside; it is also provides an alienated perspective from outside, thereby constructing the style of the film on this interplay of different perspectives. 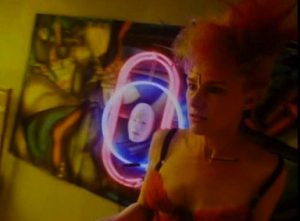 This simultaneous foregrounding of the theatrical nature of the New Wavers and the self-reflexive alienation from it is achieved through several devices. The recurring point of view of the alien creatures enables viewers to distance themselves from the depicted reality and to detach themselves repeatedly from the anthropocentric position. Another cinematic device that intensifies the alienation effect is a persistent crosscutting between different narrative lines from beginning to end. And finally, the frequent use of direct audience-address enables viewers to become distanced from the depicted reality. This device is especially effective and captivating in the black light scene, when Margaret recounts her story directly to the camera while applying neon make-up. This inventive cinematic technique during the monolog amplifies the alienating effect of direct audience-address.

These alienation devices punctuate the New Wavers’ hallucinatory life style and enable the laying bare of the theatricality of both New Wavers and the film itself. Therefore, the words “Let’s start the show” spoken by the fashion show manager at the beginning of the film should be attributed not only to that particular scene but to the film as a whole. The film’s opening scene, with a close-up of a white mask, which is broken at the end of the film, concisely demonstrates the interaction between theatricality and alienation in Liquid Sky.

The high stylization and theatricality of both the depicted subculture and the film itself open the possibility to think about Liquid Sky in terms of a camp sensibility. And yet, in one interview, when the director was asked whether his film could be called camp, Tsukerman answered: “You could [call it camp], but in general I don’t like it when my film is called camp.” 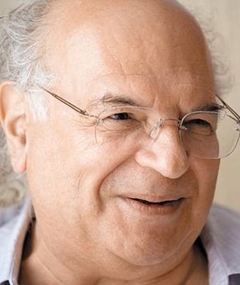 Slava Tsukerman was born in Moscow and made his debut at the age of 21. He graduated from the Department of Cinematography of the State Institute of Filmmaking (VGIK). In 1973 he emigrated to Israel where he made several documentaries. In 1976 he moved to New York City, the source of inspiration for his best known film, Liquid Sky.