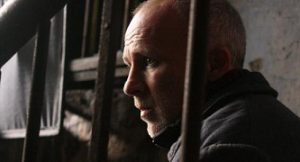 Missing Man, Anna Fenchenko’s debut feature-length film, is a diptych of sorts—two nearly autonomous narratives shaped by two different settings, with almost wholly different dramatis personae. In one, there emerge the outlines of a story of the fatal and absurd results of combined state interference and incompetence. The Saint Petersburg municipal authorities and the police insist both that a man (Andrei Filippak) move, in connection with what one assumes are the cutthroat real estate wars in Russian cities, and that he not move, so that the police may find him and demand his testimony in the case of a young man who went missing from his neighborhood. In the other, this man, who remains nameless for the greater part of the film but is given the nickname Pasha, joins a ragtag group of people intent on outrunning their pasts and starting new lives on the periphery of the state—Yakutiia, the Far North, and so forth.

Pasha ties the two stories together, not only with his appearance but with his consistent attitude toward the world. Actually, he shares the distinction of appearing in both halves with the original “missing man,” young Volodia. However, the latter functions as a symbol, a transparent signifier of what Pasha himself has become. Pasha, by contrast, performs as a lens; his apprehension of the world around him defines that of the viewer. Pasha’s almost belligerent passivity toward the world around him has a distorting effect on the narrative, as widely broadcast events or commonsensical plans of action take him, and the viewer, by surprise. The motivations of others are inaccessible to Pasha, who does not pay attention to them or attempt to cultivate empathy.

As a result, the viewer lacks access to a great deal of situational information—much in the cinematography reflects Pasha’s deliberate closedness to his environment and to others. The vast majority of the shots in the film are centered on Pasha. While the distance varies from long shots to close-ups, the persistent framing—by darkness, by doorways or curtains, by the confines of a small room or car—often precludes situating him in a larger context. When he is not present in the shot, Pasha’s point of view predominates, and prevents the viewer from witnessing key shifts in the attitudes of others, as in the case where a policeman begins weeping inexplicably over Pasha’s lost cat. The most notable points where the camera breaks from these two patterns is in wide shots, such as that of a spookily abandoned bus station, by which the complete absence of connection between man and environment is underscored.

The film, as it develops, suggests that Pasha is much more aware of his shortcomings than he seemed. At first, Pasha resists all identity except that which the state gave him in his passport—a point that is cleverly reinforced by his rebuffs of sexual advances from work associates of both genders. Deprived of his state-given definition in the passport, he is motivated to seek his own self-definition and break the avoidant patterns he had established for himself. Learning to interact with people on new terms is difficult, and the film is littered with failed attempts.

In the history of stories, individuals on the social fringe have been finding places for themselves in collectives for a long time, long enough that Fenchenko has a rich genre tradition with which to contend when she chooses such a man as her central focus. For example, one may take the war film—notable for engendering national cohesion through the development of a unified fighting team—and the road movie, where groups of losers often create their own, alternative communities.

The war film clearly resonates when an unidentified entity with dogs pursues Pasha and other residents of a boarding house for transients. While there is no swell of non-diegetic music to give emotional clues, the slightly slowed motion and enhanced sounds of breathing suggest the heightened awareness of combat. One of Pasha’s comrades stumbles, Pasha turns round, the short fat man gestures, “Go on without me.” Were Pasha to recognize his role properly, this would be a moment of heroism for the sake of another. Pasha goes on alone. Rethinking his decision later, he returns to that spot. His comrade is gone, a sack of potatoes in his place; Pasha clings to this remnant for much of the remainder of the film, as if to a surrogate-companion.

In terms of the road movie, not only is a collective formed by the confines and conversations of the car in which Pasha finds himself squashed, but there are also tentative attempts at a unifying soundtrack, as the elders of this group croon a folk song in the front seats. This song, and the effect it might have had on Pasha along with the others in the car, is terminated by the wail of a siren. The state continues to determine the conditions in which identity is constituted—a passport, not a car—and Pasha, implicitly, allows it to do so.

In the end, though genres are not the route to salvation, Pasha experiences a breakthrough that enables him to reclaim his passport identity, the name Leonid. Dawn breaks on Leonid in his final scene, and the light reveals him in the open, on a pier, as a rowing shell passes by, pure harmony between humans and environment; all of this reflects a dramatic inner change. The question remains, however: how can that changed interior connect with the external environment? Fenchenko leaves this unanswered, shifting instead to a shot of a crowd surging past the camera, mirroring the shot that originally introduced Leonid.

In a way, Leonid’s experience reflects a certain larger strain within Russian culture that seeks obsessively after self-definition and, in the same stroke, to preserve opportunistically its inscrutability and obscure the moment of clarifying annunciation. Into this discourse enter the Russian Soul, or Russia’s unstable position at the edge of East and West. Fenchenko’s film seems to engage this thread of discourse at the meta level, highlighting the existence of the discourse as much as it enters into it by interrogating the nature of one man’s identity. 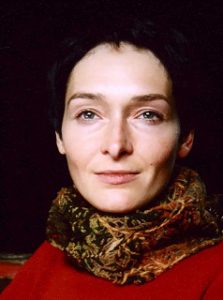 Anna Fenchenko was born in 1970 into the family of film editor and Russo-Soviet cinema notable, Vladimir Fenchenko. In 2000, she graduated from Vladimir Khotinenko’s workshop in the school of directing at the State Institute for Filmmaking. Between 2001 and 2002, she directed more than 20 episodes of the television serial Dolls for NTV.