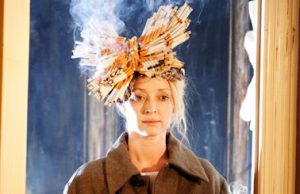 Praised and criticized as “art house chick flick,” Rita’s Last Fairy Tale is a continuation of Rentata Litvinova's obsession with love and death in Russian cinema.  Produced on an extremely low budget with Litvinova's own money, the film combines fairy tale fantasy cynicism with decaying reality that creates a lopsided social portrait of contemporary Russia.  This combination raises and foregrounds a deeper tension between culture and class division.

The film opens as the haute couture Grim Reaper, played by Litvinova, approaches her headquarters, tucked away in a blanketed snowy forest.  This Angel of Death adorns an expensive, Alexander McQueen-inspired style but, at the same time, her high-fashion opulence is obstructed by her surroundings.  Her oversized radio, through which the static is so overbearing that it is of hardly any use, is anachronistic to her means of transportation—a new, shiny black Volvo.  Her “office” door, a stand-alone wooden board among the trees, reinforces the reference to the deep fracture between the extravagance enjoyed by novye russkie (new Russians) and the memory of dilapidated Soviet goods.  The divide between the functional and the useless—the haves and the have-nots—is confirmed in Death's headquarters, where the drawers are empty with the exception of Litvinova's black, feathered headdress.  This also parallels the other main space in the film, a hospital.

It is there that a series of flashbacks narrates the story of Rita, a terminally ill woman who comes to stay at the hospital to undergo treatment.  Litvinova appears there in disguise as Tania, a nurse and Rita's caretaker.  The clinic, however, is just as rundown as Death's main office, underscoring that the film is saturated with decay.  The space is punctuated, at the same time, by little luxuries: the hospital staff's furs, a world in which smoking is always permitted—even when it isn't—and the privilege and impertinence of answering a ringing cellphone in the operating room, ultimately reinforcing that in this world, death is more beautiful, and more luxurious, than life.

The general misery of the mise-en-scène is accentuated by the relationship between life and death through the love story of Rita and her boyfriend, Kolia.  Rita’s “fairy tale,” however, must play out in the hospital, and their narrative is peppered with smaller vignettes that spotlight the futility of a happily-ever-after ending.  Litvinova materializes and dissolves during one of Rita and Kolia’s visits; Kolia brings Rita a makeshift veil; he passes out, drunk in the snow, after presumably realizing that she will not survive.  Litvinova incorporates the hallucinogenic trip of Alice’s fall down the rabbit hole without the relief of waking up from a delusional fantasy.  The love story lived out in the hospital is a putrefaction of the challenges faced by “real” people in everyday life.

The decay of reality pinned against the posh nature of death is fulfilled through Litvinova's character, who is the hyper-realization of beautiful death.  Litvinova’s status as the visual focal point of the film is carried out early on through dialogue, during which Rita tells her: “Death needs to look like you.”  If the film reinforces that Rita's “fairy tale” is consciously doomed from the start, then it also uses Litvinova herself as a way of mocking the idealistic nature of the fairy tale, and in turn, transposing that absurdity onto contemporary Russian culture through the Dead fashionista.  Even Litvinova's pet leads a more luxurious lifestyle than that of the hospital patients.  While her ermine oscillates between a mobile animal and a taxidermied accessory, it is permitted to lap up the leftovers out of her champagne flute while the hospital patients live within cracked walls and under dripping pipes. 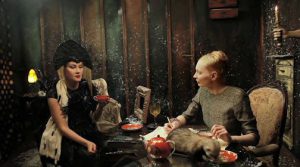 Rita’s Last Fairy Tale recycles some of the death tropes from Litvinova's 2004 film, The Goddess: How I Fell in Love.  In Goddess, the protagonist, Faina (also played by Litvinova), is imbued with the conflation of love and death.  In Rita’s Last Fairy Tale, however, Litvinova is the physical manifestation of the latter.  This progression from the previous film is cited through, for instance, the obsession with animals and the way in which they add to the rancidity placed on love and the glamour of death.
The pet crow from Goddess, for example, has a cameo in Rita’s Last Fairy Tale, and also appropriately appears during the end of the film as Kolia is about to commit suicide.  Sitting by a window in front of a statue of the famous cosmonaut, Iurii Gagarin, the gigantic dead stone comes to life just as Kolia is ready to pull the trigger, prompting him to toss the gun.  If a man who has been dead for forty plus years has the ability to stop suicide, then in this film, death removes all cultural authority from life.  It enjoys the chic lifestyle of the rich and cultural elite, but it also dictates the fate of the living.
The conflation between love and death is tied to Litvinova's history as both an actress and a director.  While she directly addressed these themes in Goddess, she developed recognition primarily through her earlier work with Kira Muratova, in whose films she starred.  Litvinova's reputation as a film, cultural, and fashion icon adds another layer to the questions Rita;s Last Fairy Tale raises about class and cultural consciousness. 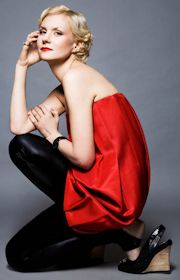 Renata Litvinova is a director, screenwriter, and actress, and was educated at the All-Russian State Institute of Filmmaking.  She has won numerous awards for her roles in films over the past few decades, and is particularly known for her work in Kira Muratova’s Passions (1994) and Three Stories (1997).  Litvinova has also developed a reputation for her contributions to screenwriting, as well as for the recent films she has directed and in which she has simultaneously starred.