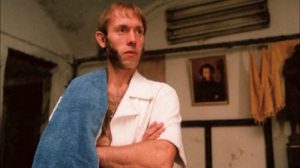 In the backwater fictional Soviet town of Zaborsk, a group of young ruffians and partiers by the name of “Capella” have all but taken over. The freedoms of perestroika and glasnost have opened the floodgates for their antics. The members of “Capella” violate Soviet societal norms not only in their refusal to work and their penchant for partying, but also in their public performances, which are aimed at shocking and upsetting the rest of the town. They stage a fake domestic fight and throw a manikin out of a high-rise building. They march through the streets until an unknown man ambushes and shoots them all down. After a few moments of shocking silence, they get up and resume the march, revealing that the gunman himself is a member of “Capella” and the massacre was a performance. They hold “jumping frog”-like races with balloons in the shape of phalluses and testicles. They even go so far as to expose themselves and flaunt fake sexual organs (in the form of cucumbers, tomatoes, and other foodstuffs). “Capella” epitomizes the youth of perestroika, who do everything in their power to degrade the morals and sensibilities of previous generations. More aptly put, though, they are an over-the-top representation of this perestroika generation. The footage of them is a product of the news crew who has come to document their behavior. It is for this news camera—and the rest of the Soviet Union—that they perform.

Their transgressive behavior relies on exaggerated performance, and thus despite the heteronormativity of their lewd acts, they embody camp, albeit a Soviet version. The members of “Capella,” however, are not the campiest in town. This prime position gets edged out when Viktor (Viktor Sukhorukov) and Aleksandr (Aleksandr Medvedev) arrive. They come dressed in the characteristic suit, necktie, flowing cape, hat, and cane of Aleksandr Pushkin, Russia’s greatest and most revered poet. It is a form of drag complete with sideburns. Instead of performing gender, though, they perform Pushkin: They speak, act, and train to be like Pushkin. The result is not a sensitive or creative individual, but an automaton more akin to a fascist than a poet.

This camp has power, both social and political. With quick fencing moves from his cane, the diminutive Viktor gives all of the “Bashers,” the bully members of the local bodybuilding gang, a sound thrashing. He wins their respect, and the “Bashers” adopt Viktor and Aleksandr’s Pushkinian dress and sensibilities. These empowered individuals clean the town of the “Capella” group by terrorizing and even assimilating many of the members into their ranks. The Pushkin club is praised for its contribution to society and gets officially established through the proper bureaucratic channels. Every club needs a place to meet, and the Pushkinists choose a dilapidated and abandoned building in the center of town. The former headquarters for “Capella,” it has been slated for demolition by the local bureaucrats. The Pushkinists claim that it is actually the house of Pushkin’s brother-in-law and, therefore, a building of historic significance. On the day the building is to be torn down a united front of Pushkinists stands in front of the encroaching bulldozer until top party officials come to assess the situation. Viktor’s smooth-talking wins them over, and the officials hand the building over to the club.

Positive political action and favor with the local state bureaucrats (whose capacious gilded offices are just as campy as anything the Pushkinists can produce) do not last long. The Puskinists go too far. Their subversion starts when Aleksandr’s uncle, a sculptor, quickly transforms the Lenin bust on which he is working into Pushkin’s likeness. This act shows the ease with which the cult of personality can change from that of Lenin to that of Pushkin (and, implicity, to that of anyone, Stalin included). The physical change from Lenin to Pushkin reflects an ideological shift as well. Rather than advocating a Soviet identity, the Pushkinists endorse a nationalism based on ethnic Russian identity (when even the Jewish Feinstein can become an ethnic Russian). They replace Soviet banners and slogans with quotations from Pushkin, once again implicitly criticizing Soviet ideology and iconography by casting it as empty rhetoric that can be easily manipulated and reshaped. This critique gets even more biting as the Pushkinists become increasingly violent, power-hungry, and aggressive towards those who do not espouse their beliefs. The news reporter who first came to film the “Capella” group turns his attention on the Pushkinists and gives them an unfavorable review in the newspaper. They ambush him and brand his face with Pushkin’s image. Eventually they are caught and, in infinite disgrace, shaved of their sideburns. 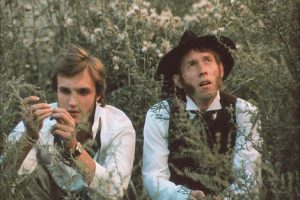 The clearest critique of the cult of personality comes in their reaction: rather than continued loyalty to Pushkin, they switch allegiance. The final shot of the film depicts them militaristically marching from a high-angle. They sport the shaved head and clean face of Vladimir Vladimirovich Maiakovskii, while reciting the famed Soviet poet’s verse in unison.

Previous scholarship has analyzed the film with reference to satire, rather than camp. What, therefore, does qualifying the type of performance in the film as camp add to an understanding of the work? It focuses attention on the way in which performing an identity can be politically empowering, both on the screen and in life. This point is most clearly articulated by the two central actors themselves, whose first names and patronymics—Viktor Ivanovich and Aleksandr Aleksandrovich—are the same in both the film and “real life.” The line between performing and not performing, therefore, becomes blurred: each actor avoids being pinned down by one authoritative identity. For the characters in the film, their campy and not too self-reflexive performances grant them only temporary political power. The performance of the film itself is both self-conscious and campy. It has an even greater potential for inspiring the spectator to political action. Someone other than the filmmaker realized this potential. The authorities never officially banned the film, but Sideburns was neither screened nor released in the Soviet Union. In a new form of censorship, the rights were purchased by an independent distributor and the film was put on the shelf. But not forever. 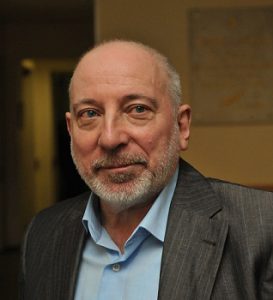 Iurii Mamin was born in Leningrad. He made his start in the theater. In 1982 he finished coursework on screenwriting and directing under El'dar Riazanov. His first feature film, Neptune’s Holiday, made its debut in 1986. Mamin has continued his involvement with the theater and film industry, working as both a director and screenwriter. He has also expanded to acting and television. In 1997, he was awarded the title of “Honored Artist of the Russian Federation.” In 2009, he returned his efforts to the big screen with the satirical film Don’t Think About White Monkeys. Since 2009, he has taught at the St. Petersburg Commercial Institute for Television, Business, and Design.