Stasya is Me
Стася—это я 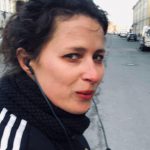 Stasia Grankovskaia is an actress, director, and cinematographer. Her 2019 debut documentary How Dina and I Went to Chelny was nominated in the category “Best auteur film” for the national documentary award Laurel Branch.

Daria Shembel — Stasya is Me by Stasia Grankovskaia is composed almost entirely of home movies shot by her father and other family members at the beginning of the 1990s, featuring Stasia from age four to eight years old. Only in the final section of the film is Stasia behind the camera herself shooting her grandmother’s funeral. Despite the collaborative nature of the project, Grankovskaia’s perspective is quite visible. The film’s poignant opening and closing scenes, featuring grown-up Stasia holding her child in her arms, assert her authorship, suggesting that this is her memory and her personal narrative.

The first part of the documentary is filmed mostly by Stasia’s father at her grandparents’ house in Odessa, where relatives would gather on summer vacations. No particular events are shown—just ordinary domestic affairs. The camera captures little Stasia playing with her grandpa or sitting on top of her dad’s shoulders, adults engaging in conversations over drinks, or Stasia’s grandmother presiding over the domestic space and winking at the camera. The absence of any interpretive commentary and minimal editing point at a gentle and self-effacing strategy in Grankovskaia’s re-processing of a family archive. Delving into family history is often laden with intense memories and even trauma. In an interview with TV Rain, Grankovskaia reveals that what is captured on the camera were her only encounters with her father and keeping all of this footage was a therapeutic way to increase her father’s presence in her childhood.

The second and much shorter part of the documentary filmed by Stasia transports the spectator 30 years forward. This time the family members gather in Moscow for Stasia’s  grandmother’s funeral. This section is underlain by a powerful feeling of loss—not just of a family matriarch but of Stasia’s childhood as well. It is marked by a sudden transition from black-and-white to colored imagery, which is a reminder of technological development and passing time. The documentary’s last shot takes us back to the house of Stasia’s childhood in Odessa, where all family members are together and look happy. This is Stasia’s tribute to her family and to the memories, images, and events that enabled her identity. Through pain, longing, and happiness, the documentary shows the duality of time in home movies: they are able to freeze forever the happy moments, keeping everybody alive, but the jumping across decades makes us poignantly aware that this “mummification” of the fleeting moments (Bazin) has limited power of preservation. The film is highly engaging and striking for its powerfully familiar and haptic images, bringing about a sense of communality. Given the homogeneity of Soviet childhood, I can only imagine how many viewers would be able to revisit their own experiences of spending summers at grandparents’ dachas and say, “This is us, ...”