Since her screen acting debut in Kira Muratova’s Passions (1994), Renata Litvinova has become one of the most immediately recognizable figures in modern Russian cinema. Bold and precise red lipstick, the classic scent of Red Moscow perfume, sculpted waves of blond hair, and careful attention to wardrobe—such minutiae generate a sense of glamour indebted to the sirens of the silver screen. Simultaneously, Litvinova’s cult status is intimately connected with her style of performance, particularly in Muratova’s films. Hers is a hyper-stylized performance, in which the understanding of character is inevitably restricted to surfaces, leaving no access to interiority or in fact exposing that beneath her exterior lies only a consuming emptiness. In essence, the symbolic dynamic that Litvinova introduces into any given film is the absolute attractiveness of the death drive, a Charybdis that not all around her can successfully navigate.

In The Goddess, Litvinova examines this dynamic further, expanding on the experience of one individual from her array of beautiful homunculi. Faina is an investigator with a division of Moscow police, who has an uncanny and hit-and-miss style of inspection, who lives in a moodily dilapidated apartment with red high heels for house-slippers, and who is haunted by dreams that exhort her toward death. All of the above seems related directly to her great tragic flaw: “I do not understand anything about love.” Faina states this, truthfully and without affectation, and elicits any number of allusive definitions of love: it is a river one cannot climb out of; it is something not quite fleshy, but still bloody; it is viscerally fleshy as well as bloody; it is the meaning of life. These definitions, for the most part realized verbally instead of visually, fail for the greater part of the film to resonate within Faina’s loveless soul.

The space left by love’s absence is filled with a burgeoning multitude of symbols with a single, indefatigably consistent referent: dead fish and pesky ravens, chilled flies and dampness and cigarette butts―all of these coalesce into a very profound sense of lifelessness. Uniting these sites of death is a sense of decrepitude, nowhere more palpable than in the wayfarer’s station between life and death, the glass-walled cafeteria where individuals pick over the remains of liquid meals—soup and cognac. 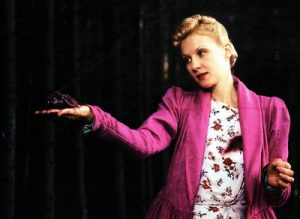 This cafeteria sets the tone and brings Litvinova’s typical performance of the other-worldly into a readable context. This is a reimagining of Edward Hopper’s 1942 Nighthawks—even Hopper’s woman in red is recreated as Faina’s Mother (played by Svetlana Svetlichnaia, a cult actress in her own right) glides through in her evening gown. Such allusive visuals situate the film and Litvinova’s persona within the aesthetics and discourses of film noir—the post-traumatic deterioration of the family structure, interpersonal alienation, and the strangely deadly force of unpoliced female sexuality.

The intimate connection between passion and death is hardly a new discovery. Certainly, connubial love is central to this dynamic in the film, from the inseparable pair of corpse-like doctors (Elena Rufanova and Andrei Krasko) to the obsession of Mikhail Konstantinovich (Maksim Sukhanov) with his dead wife. But, in her direction of the film, Litvinova extends the quandary of love into additional spheres: fraternal and especially filial love, as played out in a series of very effective scenes between Faina and the shade of Faina’s mother.

An element that refreshes this reexamination of an old truth is Faina’s own absolute incorruptibility, a state that is reinforced by her dream appearances, which oscillate between an impenetrable high glamour and a conspicuous lack of make-up in lighting that makes the professional young woman look like a baby-faced teenager. However, this is no childish naiveté to be destroyed by tasting of the fruit of the tree of knowledge. She is aware of her personal deficiency, as the men around her are not slow to remark upon it. These remarks appear to bother her, even if her inability to love does not, but no one can bully or lead her to love.

Only rejection, the loving rejection of a mother bird pushing a fledgling from the nest, or a selfless lover giving up all claim to the object of his desire, can propel Faina into death to find, once and for all, the means to love. The free fall precipitated by this loving push is reflected in the shift of aesthetics in the film; the ugly, but comfortingly comprehendible, grit of the dying city dissolves into an incongruous forest and the narcissistic mirror reflections that have surrounded Faina in the world of life can no longer distort anyone’s apprehension of the world. This final sequence could not be a primer to love, and, through its very sketchiness, it disavows that goal. But, in its unusual exculpation and elevation of an incarnation of Litvinova’s empty goddess, the film offers a novel augmentation to the manifold meaning of love. 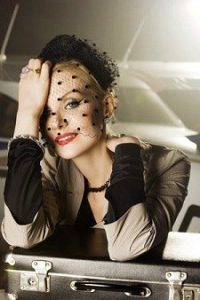 Renata Litvinova entered the screenwriting department at the All-Russian State Institute of Filmmaking in 1984—training that has been realized in her screenplays for such works as Valerii Todorovskii’s The Land of the Deaf (1998) and Vera Storozheva’s Sky. Plane. Girl (2002), as well as a series for the “Kul'tura” television channel, “The Beauty of the Hidden.” She has been especially prominent as an actress, appearing frequently in Kira Muratova’s films.