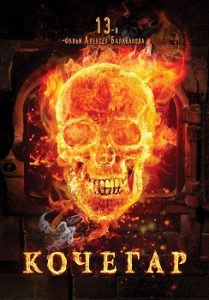 The oven represents a hospitable place in Russian peasant culture. It occupies the center of the house, and is the symbol of vitality and health as depicted throughout folklore, art, and literature. Likewise, the fireplace was a lavish fixture in Imperial Russian culture, decorated in every room of the palaces of the Tsar. Aleksei Balabanov’s most recent film, The Stoker, takes this venerable symbol of life from the Russian cultural tradition and transforms it into a visual marker for death: murdered victims of the Russian mob are incinerated one after another throughout the film, as Balabanov disposes of his characters with little remorse. The oven is at the center of both visual and verbal play in the film. Each character’s domestic space prominently features a warm burning stove, and mobsters are told to burn their hit lists after reading.

The film, set in the mid 1990s outside of St. Petersburg, tells the story of an ethnic Yakut, Major Skriabin, a shell-shocked veteran of the Afghan-Soviet War, who works as a stoker. Living in the incinerator room, the Major shovels coal all day, turning a blind eye to his former military comrade turned mobster, the Sergeant, who arrives to dispose of bodies. Balabanov’s mobsters are typical caricatures, taken not only from his previous films such as Dead Man’s Bluff (2005), but also Hollywood films. The main hitman, who displays no emotion and kills with machine-like efficiency, resembles the iconic character of Anton Chigurh from Ethan and Joel Coen’s recent film No Country for Old Men (2007). A deadly love triangle between the stoker’s daughter, the sergeant’s daughter, and the hitman unites all of these characters. 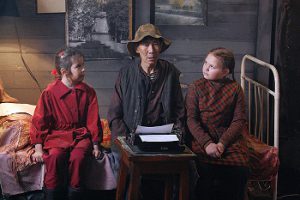 Almost all of Balabanov’s films feature a meta-narrative about cinema or other aspects of cultural production. The stoker occupies his time by writing his own short story of a Russian criminal sent into exile in Yakutia during the nineteenth century. The story serves as an allegory for the abuses of Russians across their history, as the exile rapes a Yakut woman, whose husband beats her for this transgression. Some reviews have mentioned that this inserted story is a continuation of Balabanov’s, The River (2002), a film that took place in Yakutia, but was cut short after the death of the lead actress Tujaara Svinoboeva in a car accident during the film’s production. Other reviews go as far as to interpret the stoker autobiographically, saying the character’s clothing resembles Balabanov’s. The character can additionally be read as a throwback to the artists, filmmakers, and authors who during the Soviet period were forced to take up employment in menial jobs (“dvorniki”), as their works were not published.

As much as Balabanov constructs the film around the image of the stove, it is driven by its music. The importance of music is not unfamiliar for Balabanov, who prominently features music and musicians in many of his films beginning with Brother (1997). The sound editing in The Stoker can be seen as a continuation of Balabanov’s previous two films, Cargo 200 (2007) and Morphia (2008), in which film songs offer a maniacal and cynical accompaniment to the cruelty depicted on screen. The musical score of The Stoker dominates almost every scene, at times almost drowning out conversations, and appearing during every important action in the film. Whereas many of Balabanov’s previous films revolved around a series of titled vignettes or episodes that fade to black, The Stoker connects the temporal-spatial distance between scenes by using the musical score, which drives the back and forth movement of characters walking from location to location; this organization of the film is pedestrian in both the figurative and literal sense.

The Stoker is Balabanov’s 13th feature film, a point emphasized in both the advertising trailer and release date (13 October 2010). The Russian Film Symposium has screened all of Balabanov’s feature films. This year’s theme, “Other Russias, Russia’s others,” looks at the Russian film industry’s gaze into the periphery of Russia: films have moved shooting locations away from the center cities of Moscow and St. Petersburg, to offer a view of the provinces. Although Balabanov’s film is set in St. Petersburg, this is not the imperial city of Peter, nor the Soviet city of Lenin, but rather the faceless location of the outlying city of Kronstadt that could represent anywhere in Russia. Balabanov seems to be more interested in a question of the inner struggle that is going on within the borders of Russia. The stoker’s hopeless last lines in the film address this issue: “This isn’t war. War is different. There you have us versus them. But here, everyone is ours.” 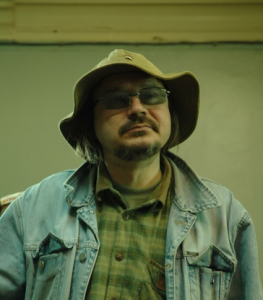 Aleksei Oktiabrinovich Balabanov was born in Sverdlovsk (Ekaterinburg) on 25 February 1959. He graduated from the translation department of the Gor'kii Pedagogical Institute in 1981. He worked as an assistant director at Sverdlovsk Studios from 1983 to 1987. In 1990 he graduated from the Advanced Courses for Screenwriters and Directors in Moscow. Since his feature debut, Happy Days, he helped found the STV Film Company and has directed twelve more films with the company, from art-house to popular genre films.