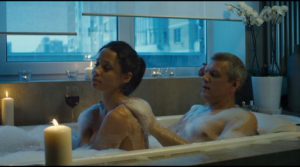 The White Moor, or Intimate Stores about My Neighbors is a film driven by the romantic intrigues of what director Dmitrii Fiks calls “the top of the middle class.”  The troubled personal lives of three professionally successful men are examined in an almanac film that is a loose adaptation of Shakespeare’s Othello.  The three storylines each portray husbands in relative states of impotence: Andrei (Aleksandr Galibin), who cannot obtain a divorce from his wife to marry his mistress; Misha (Andrei Sokolov), who is estranged from his once-cheating wife and lesbian daughter; and Lenia (Igor' Vernik), a closeted homosexual facing increasing pressure from his wife to have another child.

The marital problems of the families are inextricably linked to each respective husband’s economic standing, a fact reinforced by the film’s mise-en-scène.  Almost all important plot developments take place behind the wheel of expensive foreign cars.  Whether Andrei is orally pleasured by his mistress, Misha is kicked out by his wife, or Lenia is harassed to produce another child, this is a class of Russians in motion.  The film’s opening scenes reinforce an obsession with vehicles: Andrei’s wife hits and kills a man on a bicycle while she is driving, and Misha’s friend, Iura, is injured in a car crash that kills his wife, Ania.  It is only in the final scene, moreover, that the three protagonists assemble in the same physical space as their cars weave past one another.  If the train contextualized a way of thinking about social advancement in the days of Anna Karenina, The White Moor presents the car as the new symbol of class development.

The car, however, is not the sole symbol of mobility in the film.  A vacation in Egypt, a business trip to Tver', and a lusty stay in a swanky dacha all reinforce the idea that these are Russians whose interests and conflicts rest on their relationship to the means of production.  It is in Tver', for example, on a trip to examine one of his many dental clinics, that Lenia is able to sleep with another man, just as it is at her dacha that his wife, Vika (Zhanna Epple), meets a well-to-do man who will help her conceive, arriving, of course, in his expensive SUV.  The intrigue between Andrei and his controlling wife, Natasha (Anna Iakunina), similarly must play out “elsewhere,” as Andrei contemplates to what end he will go to free himself from his suffocating relationship. 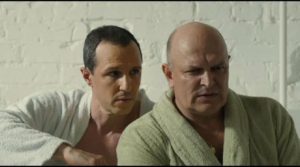 Dmitrii Fiks’s previous work in television serials and documentaries visibly influenced the structure of The White Moor.  His series, The Balzac Age, or All Men are Bast... (Bal'zakovskii vozrast, ili Vse muzhiki svo...), in which he developed his own take on Darren Star’s American series, Sex and the City, first premiered in 2004 and lasted three seasons.  Just as Star’s version, set in New York, followed four women with distinctive quirks and personalities as they encountered moment after moment of various dating calamities, The Balzac Age followed a similar premise in Moscow.  Fiks’s series also featured four women, each of whom had her own established disposition and “tragic” dating history, but lacked, arguably, the liberated third-wave feminism of the American version.

Like its thematic predecessor, The White Moor presents problematic images of urban women.  The male protagonists in the film struggle with empowered women, be it over childbirth or divorce, and Fiks does not establish an explicitly female perspective on the romantic entanglements that the film sets in motion: the role of women in The White Moor is predominantly antagonistic.

The White Moor, however, is more than a cinematic adaptation of television tropes.  If Fiks chose the subtitle of the film, “Intimate Stories about My Neighbors,” as an homage to the type of urban romantic plot development characteristic of his televised work, the film’s main title firmly establishes its intertextuality with the Shakespearean drama.  The Tragedy of Othello, the Moor of Venice, one of Shakespeare’s most recognizable tragedies, follows the romantic trials and tribulations of a man with high professional aspirations: Othello navigates his secret marriage with Desdemonda through the rivalries and conspiracies of the army elite in Venice. Venetian intrigue turns Muscovite, however, and the play’s influence on the film is particularly grounded in Misha’s character.  A celebrated actor, Misha plays the role of Othello in a modern adaptation of the play; he is seen in at least three performances of Othello’s final scene with Desdemonda, where he smothers her to death in bed. Misha maintains an uneasy relationship between his theatrical life and his personal one, so much so that his daughter accuses him of being inauthentic and distant.  As in the Shakespeare play, this conflict reaches its climax in the violent relationship between Misha and his wife, Olia (Ekaterina Strizhenova), in which he asks his daughter, “Am I real now?”
Dmitrii Fiks stated that The White Moor was never intended for the festival circuit.  It was, instead, intended for a middle class that enjoys following the lives of “successful people.” Despite this admission—or perhaps because of it—the film was screened in competition at the Kinotavr festival in 2012. 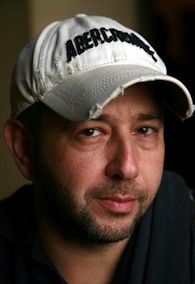 Dmitrii Fiks graduated from the State Institute of Theatre Arts in 1992, where he studied directing.  In addition to producing and directing films, he has acted, produced television serials, and worked with various other forms of visual media, including videos and commercials.  His most recent work is focused on feature film and television.